Starting up Paradigm is like having a flashback to the 1980s, with VHS lines, 8-track players, LPs, retro sounds and of course floppy disks used for some of the game’s menu options. The wacky sights and sounds immediately grab your attention and make you wonder what you’re about to get yourself into. These are not the ‘80s you remember, however, but a mutated, exceptionally creative, and often hilarious post-apocalyptic version of them, in a game with wildly different art styles, a brilliant soundtrack, and entertaining gameplay. Originally launched as a Kickstarter in 2014, Paradigm spent about three years in development after being successfully funded. Now that it has been released to backers and beyond, it has certainly proven itself worth the wait. A masterpiece created by Jacob Janerka, it’s truly amazing to realise this was mostly created by a single person.

This is the adventure of the bulbous-headed eponymous hero, who lives in the eastern European country of Krusz. It’s a strange and surreal world, where Paradigm runs a nuclear plant together with his ‘trusted’ computer John-3000. The story begins in the protagonist’s room, where he’s looking to ‘make some phat beatsies’. Unfortunately for him, his computer recently crashed and he needs to get the boot disk to reset it to a state that will enable him to create those sweet tunes. This is no small task, however, and his strange journey will take him to various places throughout Krusz. Without realising it, he’s chased all the while by an evil candy-barfing sloth called Olaf, who runs a company called DUPA Genetics. Olaf wants to destroy Paradigm, both to conceal a horrible DUPA secret and for some personal motivations that become clearer along the way. But Paradigm is too busy to notice in his pursuit to finalise his EP. A man’s got to be able to hit those beats, after all.

The story itself is very well-executed, whether convincing a psychopathic, self-proclaimed superhero with a cone head to part with something you need, persuading a knight in shining armor who’s managing a reception desk to grant you access, getting stuck in the digital realm of a computer, or swaying a pug leader of a glam metal cult to give you an item you need. It’s utterly bizarre every step of the way, with many things too good to spoil, and will continuously surprise you as to what’s around the corner. (Beware that nasty wet guard!) 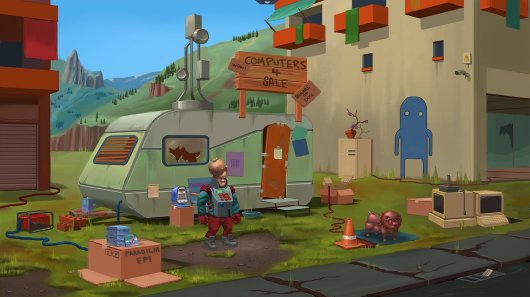 Characters are as crazy as you’d expect in such a nutty post-apocalyptic world, ranging from a dog that drinks almost pure alcohol to Doug the beatboxing eggplant, water-headed robots, an anthropomorphic duck and many, many more. Their personalities are just as vivid as their designs, all having their own stories and feeling like they belong in this world you’re exploring. John-3000, for example, clearly cares about Paradigm but also wants some time for himself to hook up with other computers, so he needs Paradigm to give him some peace and quiet. As you’re the one making that happen (controlling Paradigm), that’s something you'll fulfill with a smile to see how things progress. No matter who you’re dealing with, they all populate a world that is continuously pushing your imagination to the next level, sucking you into its tale and making you want to unravel it all. It’s got a distinctive charm rarely, if ever, seen in adventure games before (or any game, for that matter). In certain ways it reminded me of Toonstruck’s silliness, but done better.

What stands out most about Paradigm’s delivery is its combination of dry humor and absurdist comedy. Along with the witty dialogue and amusingly weird but brilliant scenarios you get into are the small visual details added to almost every scene (and the voice-over when exploring said details). I’d describe the humor as Monty Python-like, juvenile and full of puns. A small but wonderful example is a certain map scene in which you walk up to a drug dealer’s house, where a strange-looking pidgeon wearing a hat like Abraham Lincoln’s is listening to an iPod and blurps a few funny lines. This is just one of many gags that have nothing to do with the main plotline, yet constantly surprise and delight, sure to make you laugh out loud.

The puzzles are also great fun and nicely fit the game’s oddball tone. Most are inventory-based but there are a few key moments that change both the art style and gameplay significantly, like when you have to defeat the drug dealer by playing ‘Boosting Thugs’, a beat ‘em up videogame. The scene becomes fully retro with fitting sounds and a different character, but as you’re about to throw the first punch, suddenly the task switches to boosting other characters’ self-esteem instead. I found the amount of skill required for the puzzles matched the story progression quite nicely. The challenges are generally fun to figure out and are well-suited to the experienced adventurer. As Paradigm is a comic adventure, there are times when you need to think as wacky as the game itself, which I found quite entertaining. There were only two objectives that even now I cannot imagine figuring out the solutions to myself (without spoiling anything, one features some magic). Still, these exceptions didn’t take much away from my enjoyment throughout the game’s solid 6-8 hour length, which I felt was perfect here. 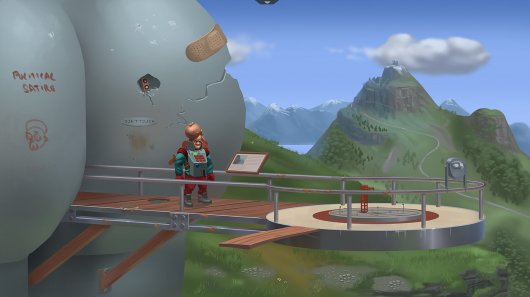 About the only thing that isn’t completely bonkers in this game is its fairly traditional point-and-click interface. When you first start playing Paradigm, a malformed tumor (with an hilarious voice) appears on the screen to walk you through the basic controls. He’s always available in the top right corner, providing “Tumor sense” to give you hotspot highlighting. You’ll collect objects and interact through a tape cassette menu that pops up when left-clicking hotspots. This features options like “Pickup”, “Use”, “Look at” and “Talk to”, which reminded me of Full Throttle and felt intuitive and natural to use. The inventory is managed through an ‘LP’ at the top of the screen where items can be combined or selected for use. There are different occasions when you’ll obtain either a map or another way of easily navigating large areas, so at no point during the game was I forced to spend needless time reaching my desired destination.

The soundtrack is superbly done by Jonas Kjellberg, complementing the atmosphere perfectly with everything from retro tunes to more upbeat sounds and full-on tracks from zany characters like a singing refrigerator. Even if you never get around to playing Paradigm, you should at least check out its soundtrack, which stands incredibly strong on its own. Voices are also appropriate, with Paradigm speaking English with an Eastern-European accent and even the supporting characters wonderfully suited to their roles. Not everything is great in this area, however, with certain voices having inconsistent volumes (the main character is much lower than some others at times). This isn’t a major drawback, but the same can't be said for the gurgling, watery voice of the robot, which is just too much. It is hard to understand, and after a minute or so it became downright annoying, making me try to skip through it as quickly as I could so he’d shut up.

The artwork is gorgeous, with a combination of retro pixel art, beautiful hand-drawn backgrounds and character models, and even some clay figure action. Where other games may be able to execute a single art style very well, Paradigm tops that by taking several key styles and skillfully portraying them all. It is such a treat when first introduced to an entirely new look, and a bigger one when the accompanying gameplay changes right along with it. Whenever the scene around you begins changing, suddenly morphing into an entirely different aesthetic, you'll find yourself engaging in a minigame that will make you wonder if you've entered a whole different genre, and yet really stays true to point-and-click adventuring. 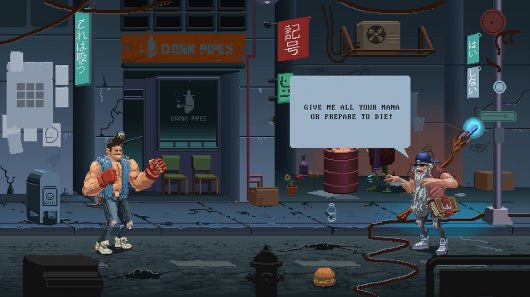 From the moment I started playing Paradigm, I knew the experience was going to be a memorable one. The intro movie is hilarious and directly sets the tone for what you can expect. Yet even if you THINK you know what kind of bizarre scenes await, you really don’t at all. The times I laughed out loud to the point of being unable to stop were incredibly frequent. It’s been a long time since I’ve encountered a game with such a unique flavor and well-executed humor, and it’s got excellent production values and gameplay to match. The only word that truly describes this game is PHENOMENAL, and it’s an experience you’ll never forget.

Author's note: I've recorded my entire playthrough of Paradigm, which is released in episodes of around 20-30 minutes. If you're interested in seeing it (edited for a more viewer-friendly experience), check out the first episode.

Paradigm is available at:

Paradigm is a uniquely creative blend of art, music and consistently humorous gameplay. It’s an absurdist adventure like no other, and one that’s earned its place among the classics.

GAME INFO Paradigm is an adventure game by Jacob Janerka released in 2017 for Linux, Mac and PC. It has a Stylized art style, presented in 2D or 2.5D and is played in a Third-Person perspective.

What our readers think of Paradigm

high production value, you can tell that there's been a lot of effort and love put into this game. a lot of variety, craziness and love for details here. even a relatively long playing time... Read the review »

It's been a long time since I enjoyed an adventure like I enjoyed this one. Copy pasting my Steam review: FANTASTIC amusing adventure. I was smiling 90% of the time while playing this game, not... Read the review »

This game is incredibly overrated because the theme is a new idea that has to do with something we all love, and that is the 90s era and geek jokes. I don't know how it... Read the review »