When I first heard of the game Elena by Catch A Cat, I was intrigued by its subtitle Displaced Reality. The concept of reality is an ambiguous one and while this indefiniteness has been portrayed in many games so far, its discussion never gets old. Elena follows in this direction, treating reality as a fabricated convention. This rationale is reflected in many ways throughout the game, both in story and gameplay. It’s a very interesting premise, but is it enough for a whole game to be based upon when all its other facets are unoriginal and technically problematic? I am saddened to say that no, it is not.

In the game you play as Anna. The opening scene starts with you arriving home. Your husband, Lennard, is taking a shower. At first glance everything seems business as usual. Suddenly, though, you hear a loud thundering noise coming from the bathroom and when you go to see what is going on a crow flies out, whilst the room itself is smashed and in complete disarray as if desolated. Most importantly, Lennard is gone. Immediately after, the phone rings and on the other end an unknown male voice tells you that he is a friend who wants to help you. You demand to know where Lennard is, but he hangs up without revealing anything more than a suggestion for you to search around more thoroughly. In order to unravel the truth, you must carefully examine the environment for clues about what has happened to your husband. Along the way, however, you come to realize that these clues reveal more about you, to the point that you start questioning your own past and the identity of a certain Elena, traces of whom you find all over the place.

Not unlike the hints of the anonymous friend, Elena is a straightforward enough game. According to the calendar it is set in 2015, and except for the last scene it takes place solely inside the apartment. A small tutorial at the beginning is useful for inexperienced players but not lengthy enough to bore seasoned veterans. The interface is minimal, offering the basic options. Playing in first-person perspective, you freely move around using the mouse and keyboard. You can also grab things by clicking on the left mouse button, and then look at them more closely by clicking the right button once it’s in your (invisible) hand. The auto-save could be an advantage if it worked properly. Unluckily for me, at one point it malfunctioned and I had to repeat a section, but since the game is so short, the profanities uttered were limited. It only takes around an hour to finish, maybe two if you are new to the genre and/or want to explore every single item you can interact with. I did, and trust me, there are lots of them. Nevertheless, only a handful is important for the progression of the story. 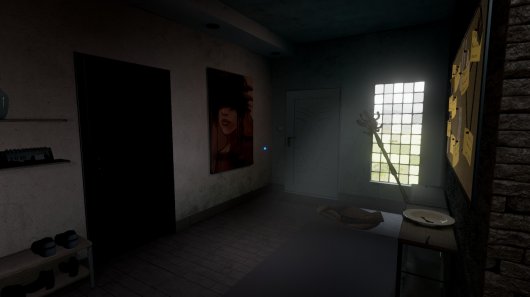 For this reason, the gamer in me soon got frustrated. Why have so many points of interaction without any tangible purpose? This type of environmental storytelling is particularly applicable to games with a limited range of in-game actions, like Elena. Yet in this case the problem is that most of the interactive items tell no story at all. Apart from the fact that you are able to pick up so many things for no reason, a lot of them are simply the same object multiplied ad nauseam. Why are there so many tablets of the same medicine? Why can we pick up every single Q-tip? Why is there toilet paper everywhere? It’s tedious, yet it’s hard to feel confident in simply ignoring all the pointless clutter – what if there’s a vital clue hidden inside, beneath, or behind an innocuous object?

Even though all these objects were supposedly implemented to give more dimensionality to this fictional setting, they cause the exact opposite effect, since no ‘real’ house would contain so many of the same useless products in arbitrary places. Some details are successful, for example the bunny slippers in the living room, which help create the mental image of Anna sitting in the armchair while watching a film on TV. The magazines, books, certificates on the wall, the souvenirs… all these tell without words the story of a couple that is believable and relatable. It is even funny that some in-game artifacts have misspelled names of their actual counterparts, like the ‘Gorilla’ pasta in the kitchen and the ‘Durian Gray’ book by Oscar Wild. Yet the clumsy overloading of the environment with too much repetitive detail detracts from, rather than enhances, the situation. In one corner you feel that Anna is indeed the artist that has painted the very beautiful paintings on display, and in the next this fallacy is destroyed and you realize that there is no way a real person could have crammed so many white plates everywhere they could find. And even if that were necessary, why make them all interactive when you can do nothing of consequence with them?

Fortunately, the objectives of the game are very clear and easy. There are no puzzles as such, just clues around the house you have to find and organize on a board (which is part of the décor, since the game does not provide any sort of inventory), so as to make the correct connections, both mentally and visually by creating lines between them. For example, early on you discover a ring with a Latin inscription on the inner side, which you note down and pin as a piece of paper on the board. You then have to come up with the translation of that inscription (merely by finding it), pin it on the board as well, and subsequently connect the two clues. There’s no fear of making wrong connections, as the game simply won’t allow it. Simultaneously, the caller who phones at specific times throughout the game constitutes a general guide that always points you in the right direction, making it very obvious where you should search next, as do various other phenomena that occur within the house. 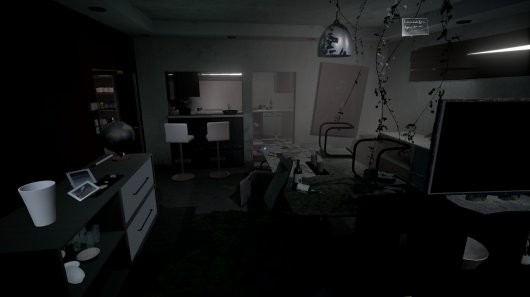 Such basic gameplay and limited duration do not add up to a particularly challenging game. At the same time, Elena does manage to achieve what its subtitle promises, creating a feeling of displacement. Its design is an everyday, common setting. There is a middle-class house complete with all the appliances and furniture, a female protagonist who corresponds to the average woman, an ordinary heterosexual marriage, and details that provide high level of verisimilitude: a book by the nightstand, family photos on the walls, make-up products on the vanity, and a vibrator in a drawer. This is a context most of us can relate to, at least indirectly. And while its initial narrative event is something few of us will have personally experienced, not even that is particularly extraordinary in fiction; many a plot begins with a suddenly-missing spouse.

However, all these banalities work in favor of the game’s aim. By creating such a commonplace premise, it facilitates our belief in the ‘reality’ of this world before proceeding to alter it within the game’s own storyline. As new rooms in the house begin undergoing the same destructive transformation as the bathroom, we are shown that the everyday reality we’ve come to accept is not stable and static, but on the contrary can be extended, modified, and augmented. Alas, it is a pity that after building on such a fascinating assertion, the game fails at the very end to provide anything more than a canned resolution that has nothing to do with everything that came before it, and thus is anticlimactic. It constitutes a rushed and clumsy effort to offer a convenient finale, yet its plausibility is inadequate and dull.

I should note that the game can be played with the support of virtual reality gear. I do not know whether my opinion would have been different if I had played it with VR hardware. I believe not, because the importance of good narrative and/or gameplay cannot be surpassed by any technological innovation. In any case, even in technological aspects Elena shows inefficiencies, the physics in particular being problematic. Objects viewed up close can’t be freely rotated in every direction, only in very specific and highly limited (and unhelpful) ways. The various objects picked up can either be returned back to their original place or just dropped in weird angles and random stances. Yet there is no distinct sound as the items fall, and nothing is smashed or destroyed after hitting the floor. Moreover, the game is offered in two language versions, English and German. Unfortunately, not all texts are properly localized in English, and in the last speech, which basically offers the whole explanation of the game, I experienced a synchronization problem between text and audio. All these malfunctions take away from the authenticity of the game despite its photorealistic graphics of the Gone Home variety. 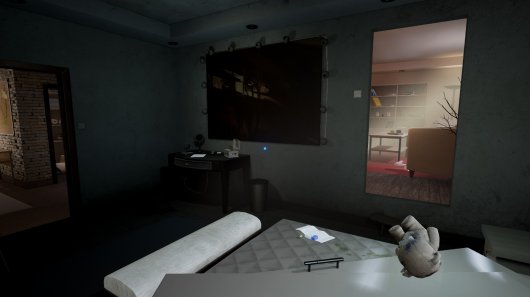 Music is played in a loop throughout the game. The piano composition is decent enough if nothing spectacular, but what I did not like was the fact that it does not match the atmosphere. There is a woman supposedly searching for her missing husband, yet the score does not convey this urgency. Instead, it sounds like a melancholy and somewhat nostalgic melody corresponding to a romantic and sentimental depiction of a woman revisiting memories of her life. Only towards the end does it change to a somewhat more dramatic tune. This holds true for the voice acting as well. Anna does not sound frantic enough for a woman who believes her husband has probably been abducted. When she talks on the phone she comes off more as annoyed than upset. Furthermore, she has the time to continuously provide so many blasé descriptions of random things that all sense of panic is lost. Unlike the music, this impression does not improve towards the finale.

To conclude, Elena is less about a displaced reality than an underwhelming and artificial imitation of it. Its potential in addressing the fabricated convention of what constitutes reality is exciting and to a certain extent enjoyable. (It is telling that Elena started as a university student project.) However, its merits lie more in its depiction of how ‘real’ a game space can look nowadays than in the game itself. If you like experimentations pertaining to human-computer interaction, then you will find Elena thought-provoking if not particularly entertaining. If, on the other hand, you prefer interactive stories to be original, with advanced narration and/or hours of gameplay, then you will probably find Elena to be a very real disappointment.

Elena has an interesting premise but it lacks execution and leads to an uninspired ending. It is worth playing if you like photorealism and environmental storytelling (lots of it) but it has few other redeeming qualities to maintain interest.

GAME INFO Elena: Displaced Reality is an adventure game by CatchACat released in 2016 for PC, Oculus Rift and HTC Vive. It has a Illustrated realism style, presented in Realtime 3D and is played in a First-Person perspective.