That's why I was intrigued by Detention, a dark, brooding paranormal horror game, which happens to be the first major release from Taiwan-based studio Red Candle. Another draw was its unique setting in 1960s Taiwan, during an ominous period dubbed the “White Terror” in which the country was under martial law and on a constant state of alert for any signs of communism. This lasted from 1949 to 1987, and although a heavily disturbing time in the nation’s real history, it makes for a completely engaging backdrop for an adventure game. Its effect is not merely superficial either; it manages to inform the plot and get under your skin in a way only great character-driven psychological horror stories can. Coupled with an elegant point-and-click interface, some nifty puzzles, and otherworldly aspects drawn from Taoism and Buddhism, Detention offers up a thrilling experience that I was powerless to resist.

The game begins simply enough. At a secluded school in the mountains, a student named Wei finds himself alone in his classroom. Upon discovering that the staff and students left due to an incoming typhoon warning, Wei sets out to escape the school as well. He soon meets a girl a few years his senior named Fang, and after learning that all of the exits are barred and the bridge has collapsed, they decide to take shelter in the school to hopefully ride out the storm. 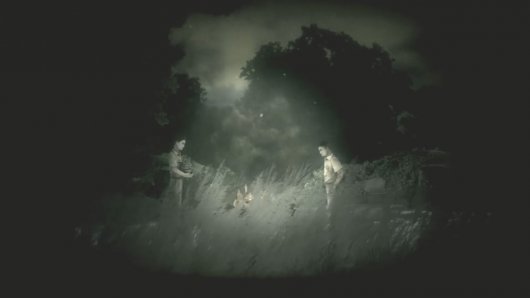 I don't want to spoil the rest of the plot, but what follows is a captivating and deeply haunting supernatural tale. It's a mixture of ghost story, dark family drama and character study. Instead of focusing primarily on the country’s troubled political climate, Red Candle elegantly uses it here to impact the protagonists’ actions. We are treated to multiple flashbacks which help flesh out Wei and Fang’s backstories and offer a glimpse at what life was like at school under such a strict regime. For example, books that "encouraged free thought" were banned and being caught reading one was punishable by death. Families were also encouraged to report any suspicious characters as potential spies, leading to a deep sense of paranoia and distrust. It's unnerving to see the way these characters have been shaped by the monstrous system oppressing them, and how they react to their surroundings and interact with each other.  This way, it becomes deeply personal and is much more effective.

The story plays out in an eerie, dreamlike fashion that makes you question what is real and what is illusion, and there's an uneasiness that permeates the entire experience. The horror aspect is implemented very well.  There are moments when Wei and Fang encounter “The Lingered,” spirits that now haunt the school grounds and are masterfully designed, evoking images from other Asian horrors like The Ring and The Grudge. Each encounter is memorably creepy.

Refreshingly, the game doesn't rely on jump scares, instead focusing on the heavy atmosphere caused by the ongoing political situation. The dark subject matter shows that even the best of intentions can lead to horrific outcomes, complete with a helping of light gore in certain sections. Imagine if David Lynch decided to direct a Silent Hill adventure game set in Taiwan, and you might get an idea of how the narrative is presented. 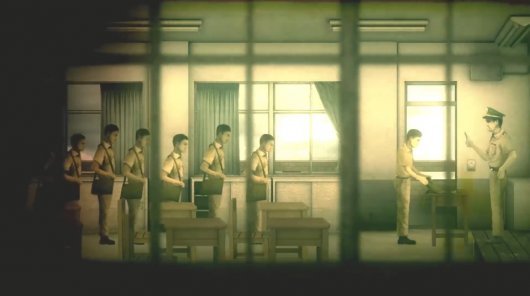 Hands down the most masterful aspect of Detention is its ingenious use of sound. Echoing footsteps, a lone person's heartbeat, a phone ringing, and indecipherable whispering play off key moments of silence to create a sense of dread over what might be around the corner in the next room. The soundtrack is also uniformly excellent, as composer Weifan Chang weaves an eclectic mix of electronic, rock, and harsh industrial-like pieces merged with traditional Asian instruments. Each score serves its respective scene beautifully and captures the perfect tone and feeling, almost becoming a character in the story without overpowering the gameplay.

There are no voice-overs for the characters, just subtitles which can be played in English or Chinese. I found that this only added to the atmosphere, because reading the well-written script helped immerse me more into the world, letting me focus more on the small details in each room instead of listening and judging how each character sounded.

Although Detention is heavily story-driven, it doesn't forget to be a game. Alternately playing as either Wei or Fang as they explore separately for the most part, both characters are completely controlled by the mouse: almost all the actions are mapped to the left button save for right-clicks to hold your breath, which is used to great effect in dealing with The Lingered. To use an item you’ve collected in the environment, all you have to do is move the mouse pointer to the bottom of the screen to bring up the inventory, then click and hold the item and drag it wherever you want to use it. It's a simple, elegant system that helps you progress through the game without any mechanical obstructions. 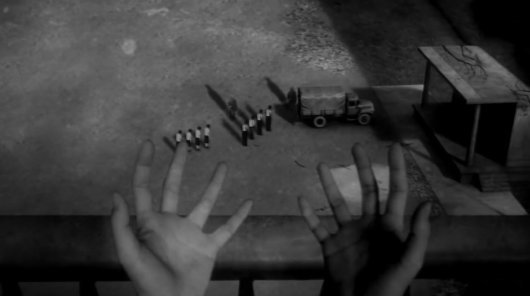 There are multiple times you can be killed throughout the game, mainly by The Lingered. Since they cannot be beaten or destroyed, you must use clues found throughout the school to figure out how to sneak past them or avoid them completely. Although deadly, it’s less survival horror “action” and more an additional kind of puzzle to solve. These sequences are used to great effect as well, with only a small amount of game time devoted to avoiding the spirits compared to leisurely exploring and uncovering the story, which serves to heighten the tension when they do appear.

One thing that always irks me in horror games, however, is when developers deny the ability to save anywhere. I never liked it in Resident Evil and I still don't like it now. Unfortunately, Detention also decided to go with this well-worn trope. Whilst I understand the idea is to instil dread and make you wonder if you can survive until the next save spot, I personally feel it's a hindrance to the experience. It doesn't scare me; it just makes me frustrated and takes me out of the game. I don't want to be thinking about when I last found a save point when I come across a dangerous situation; I want to be fully in the moment. The good thing is that the save spots are set close enough together to minimize inconvenience, and I ended up only dying once when I wasn't paying attention. I still would have preferred a save anywhere feature, but it isn’t a big deal in this case. 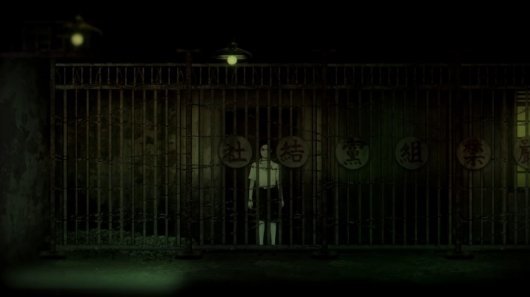 There are a few different types of puzzles to overcome. Mainly they’re of the standard inventory variety, but there's a smattering of number and lock puzzles, and a musical conundrum with an audio cue to help you solve it that could leave those not musically inclined scratching their heads. All of the clues you find scattered about the rooms in the school are collected in a journal, which you can use if you get stuck, along with various notes that serve to flesh out the local history and character backgrounds.

The great thing about the puzzles is that due to the dreamlike setting, they follow a twisted sort of logic. It mightn't make too much sense in the real world, but within the confines of the game they are integrated perfectly. Using a bucket of blood to reveal a code or searching for creepy puppets in a basement to use in a stage play about execution brought to mind the Silent Hill series in the puzzle department, and yet the obstacles and their solutions never felt derivative.

Another excellent aspect of Detention is its graphic design, which reminded me of The Cat Lady, another great psychological horror game. The two games both feature the same type of character models and side-scrolling movement. Here the appealing 2D characters look hand drawn and almost colourless, traversing backdrops that drip with creativity. From the claustrophobic hallways to dirty, dingy bathrooms to the surrounding countryside, there is no shortage of variety, and the imagination on display constantly surprised me with each new reveal. 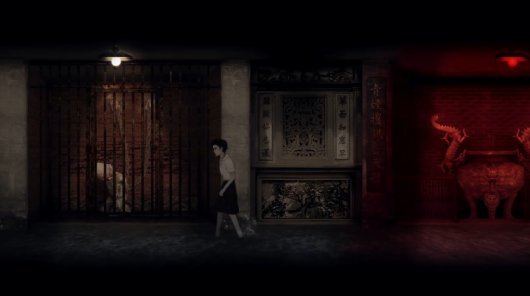 One minute I was exploring a long, ominously empty classroom, the rain falling heavily on the roof above, which left me feeling alone and defenceless. Then the next I would be searching a dank, flooded basement with jail cells and incense burners, or playing a beaten-up piano in a large music room, the empty seats serving as a reminder of the life that used to frequent the halls. The play areas became more labyrinthine as I progressed further into the bowels of the school, but I still managed to find my way around due to the distinctive design of each room.

The game ran without a single bug or glitch during my playthrough, causing no slowdowns or crashes and consistently stayed at a silky smooth frame rate. This should always be the case, but it often isn’t so it’s a noteworthy achievement for such a small development team releasing their first major game.

One possible sticking point is its relatively short play time, clocking in at around four hours. But while that might sound a bit too brief, what Detention lacks in game time it makes up for in the haunting horror experience while it lasts. There are two endings based on certain actions performed near the endgame. One can be seen as "good" and the other as "bad," but each is satisfying in its own right. Although I felt that the lead-up to both ending sequences dragged slightly and took a little too long to reach the climax, it's definitely not something that seriously detracts from the overall experience. It's not terribly hard to activate each ending, with a save point shortly before the fateful branching decisions, but you may find it worth going back and replaying the game to search for any backstory items such as notes and newspapers scattered around the school you might have missed to gain a deeper understanding of the narrative.

Simply put, Detention is a fantastic melding of narrative, gameplay and graphics. It's got a highly unique setting that is supported by excellent sound design and music. While admittedly the subject matter is very dark and depressing and might not be everyone's cup of tea, it's highly recommended for gamers who love their horror served with heavy atmosphere, dreamlike puzzles, a dash of gore and a thought-provoking story that will stick with you long after the experience is over.

Detention is a marvel of sight, sound, gameplay and storytelling; a highly atmospheric horror adventure that manages to accomplish more in its short playtime than some games twice its length.

GAME INFO Detention is an adventure game by RedCandleGames released in 2017 for Linux, Mac, PC and Switch. It has a Stylized art style, presented in 2D or 2.5D and is played in a Third-Person perspective. 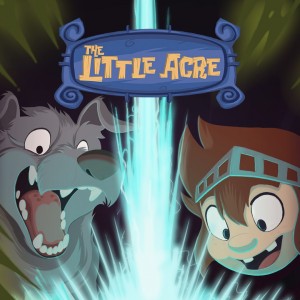