Candle is picturesque puzzle-platformer with a beguiling plot. It opens with a mythical description of the gods who forged and then destroyed this beautiful planet when its evolving creatures became selfish and violent. An urge to dominate has once again arisen in the gods’ latest creation, as Wakcha warriors terrorize a remote village and kidnap the Shaman. Teku, a young villager, decides to attempt a rescue. In the course of his journey, he will encounter peculiar friends and foes, explore exquisitely detailed locales, test his wits and dexterity alike, and do his part to reveal the hidden truths of his world.

Our brave hero’s head is a ribbed mask with holes for eyes; his body is formed of wood and moss. He is physically fragile. Set him face-to-face with a Wakcha warrior and he loses every time. However, Teku is tireless, smart and sneaky. He is also good at picking himself up to try again whenever he’s defeated. He can climb, leap, and acquire items that further his progress and defeat his enemies. Uniquely, he is also his tribe’s “Light Guide” with one of his arms ending in a candle wick that, if shielded, can maintain an ever-burning flame. Further, his candle arm will, in certain instances, generate bursts of magically effective light.

Teku confronts many characters in his search for the Shaman, including a finicky gondolier, a mushroom expert, a trinket collector, and a mad artist, plus offbeat critters of various shapes and sizes that must be enticed or shooed away. Conversations occur via dialog bubbles in which simple animated drawings illustrate what the character is trying to say – usually a brief description of a fetch quest. Words are spoken in an unintelligible language, but once an exchange has ended, the narrator always explains what has been said. The narrator’s voice is gruff and expressive and perfectly suits this primeval world and valiant saga. 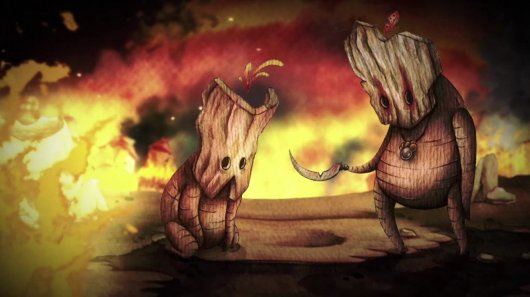 Candle's visuals are gorgeous. The environments are made of hand-painted watercolor images. Colors in the sky and ground are layered pigment washes that blend into one another, giving a sense of mistiness and depth. Trees, grass, and other organic forms are elaborately detailed. The color palette changes with each new area, from the rose and gold of a cliff-side sunrise, to the sapphire and jade of an ancient forest, to brown stones and green moss in dimly-lit caves. Most of the exteriors are natural surroundings, though the final chapter takes place in a turreted city with a fantastical temple interior. Cutscenes are a series of bright, partially animated watercolor paintings with a narration that explains events, reactions and the motivations of Teku and the others he encounters.

Background music features a Latin beat, topped by delicate melodies on the guitar, horns or woodwinds. These suit the intricate watercolor artwork and abet Teku’s progress through the landscape with their sprightly rhythms. Occasionally a particular character or setting generates music with more whimsy and humor, grounded by quirky beats. Ambient sound and animations create a sense of dynamism: creaking windmill blades, flickering fire and drifting smoke, falling water, and gorillas that swing, scratch and weep.

The action unfolds from a third-person perspective, and you can use keyboard controls or a gamepad to guide Teku. Hotspots are context-sensitive. For instance, when you approach a place where an inventory item can be used, a box icon appears and pressing a key allows you to scroll through the inventory until the correct item automatically completes the interaction. Other icons emerge when you can push something (or someone), talk, observe, nab objects or teleport to a new area. 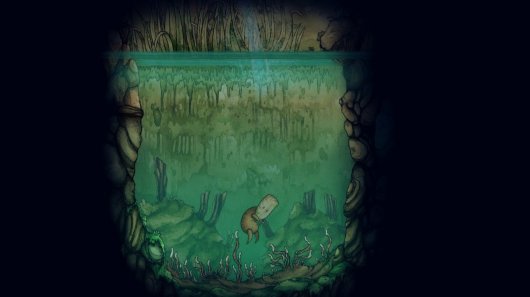 Sometimes a minigame pops up on-screen. These range from a construction puzzle with sliding tiles, to moveable starry rings, to a board game with a tic-tac-toe twist, to a pattern sequence with oozing udders. The most difficult for me was a puppet show involving a spear, a soldier and a savage crustacean. If there was a clue to the correct procedure, I missed it, and only managed to finish after lots of trial and error. Sometimes Teku has to arrange objects or implement actions based on clues from different parts of the world. You will pull levers, push buttons, arrange symbols in the correct sequence, move boxes, and dodge flying arrows that are helpful when they don’t kill you. You will also use Teku’s candle to light passages, create distractions and generate energy.

Even with all these puzzles, at its heart Candle is a platformer, and that means action elements: stalking, leaping, climbing, chasing. Precise jumping is a common requirement (sometimes while being pursued), as is the ability to catch onto ledges and cling there until a threat disappears. The most difficult challenges involve strict movements while setting up devices or tweaking the scenery and/or eluding patrolling guards, water spouts, or flying objects. Sometimes I found no margin for any error in these multi-stepped timed sequences – I couldn’t miss a step or misjudge a warrior’s motion or flub a single key press. Though Candle’s controls are simple and responsive, the most difficult timed combos are so arduous that I had to call on a family member with action gaming bona fides to beat them.

I never engaged in combat in the traditional sense, though occasionally Teku’s actions triggered convoluted, almost Rube Goldberg-like enemy deaths. (Plus pushing the bad guys when their backs are turned is easier and just as effective.) Open attacks from predators and armed foes, vicious traps and the vertical environments frequently lead to our hero’s death. This results in a vision of his limp body, accompanied by a brief sound riff, and then you start over at a point that is (usually) close to the fatal action. Autosave, plus a checkpoint-save feature with eight slots allows you (thankfully) to bank your hard-fought victories after numerous agonizing failures or mind-bending puzzles. 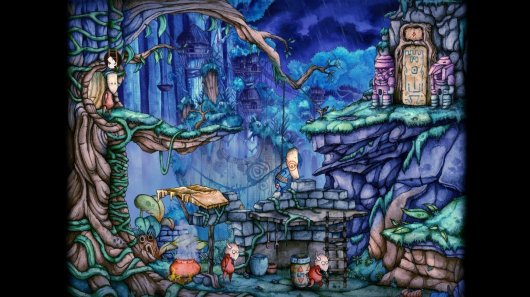 It’s a good thing that the graphics are enticing and the creatures Teku meets are diverting, because depending on your skills, the game’s pace can be quite slow. This is particularly true when progress requires solving multiple small challenges – a concoction assembly, for instance, or acquiring coins to pay for the gondola ride. Even experienced puzzle-solvers will need to navigate back and forth through various locales many times. Momentum also slows during action sequences where death is a constant companion. Environments are large and the meticulous detail makes it easy for an item or clue to be obscured. Occasionally secrets are hidden behind scenery that you don’t realize can be maneuvered through until you randomly walk or fall right into it.

In terms of game length, that’s a hard call. For those with excellent platforming and puzzle skills, the game should take about twelve hours. Those with modest platforming skills could easily double that time. For adventure gamers without these skills…well, this is not the game to play as an action game novice. Unless, that is, you happen to be extremely patient and don’t mind devoting dozens of hours to the quest.

Candle is a game for the strong of heart and hand – anyone easily stymied by multi-stepped puzzles or without reasonably quick reflexes may find it frustrating. Teku’s trek is packed with small essentials and massive, overarching implications, and the gameplay embraces both themes. For those who like a good challenge, the amazing watercolor gameworld with its wacky characters, amusing minigames and engaging storyline will keep interest high throughout. Seeing the endgame and understanding our hero’s place within the fallout of good, evil, and the razor’s-edge judgment of the gods makes this unique journey more than worthwhile.

Candle is available at:

GAME INFO Candle is an adventure game by Teku Studios released in 2016 for Linux, Mac and PC. It has a Stylized art style, presented in 2D or 2.5D and is played in a Third-Person perspective.