The demise of Japanese developer Cing in 2010 was a sad event for lovers of console adventures, as the studio developed a number of brilliant games for Nintendo in the latter half of the 2000s, among them the DS classics Another Code and Hotel Dusk: Room 215. These games were innovative and narratively deep, and are still generally thought of as landmarks in the genre. Fans of their work might be thrilled to find out that several ex-Cing staffers, including director Taisuke Kanasaki, have re-assembled at long-time Japanese studio Arc System Works to create a new visual novel-style detective adventure called Chase: Cold Case Investigations – Distant Memories, a downloadable eShop title for the 3DS. Unfortunately, the resulting game is a poorly-written and completely forgettable single-session experience that fails to live up to the Cing legacy.

The story centers on two detectives: the grizzled, cigarette-smoking player character Shounosuke Nanase and his wide-eyed female partner Koto Amekura, who serve as the Cold Case bureau investigating past crimes that haven’t been solved. This investigation, which seems poised to be just the first of an ongoing series, opens with the two having really nothing to do at all, until an anonymous tip comes in, revealing that a five-year-old hospital accident, where a seemingly innocent janitor died in a tragic fire, apparently wasn’t an accident after all.

The detectives don’t need to leave their office, ever, to open and close this case. The entire game consists of a series of discussions and interviews with four primary persons of interest, who are shuffled in and out multiple times as new facts are uncovered. The dialogue throughout the interviews is not well-written, instead coming across as dull and devoid of emotion from all parties, though perhaps the localization is to blame as the characters frequently seem to react unnaturally to the preceding statement or question. However, the worst writing takes place in the between-interview scenes where the thoroughly detestable Nanase—possibly the worst player character in recent adventure gaming memory—repeatedly calls his partner an idiot and abusively berates her, even when she appears to be providing useful information. The chauvinism that often permeates Japanese entertainment is alarming here, and never relents through the end of the game. 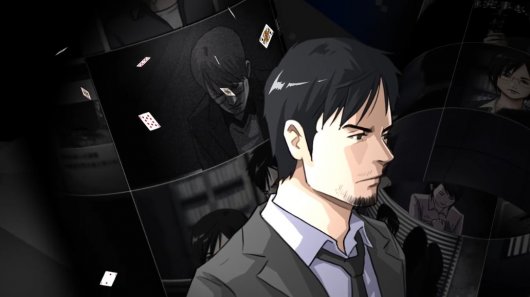 "Playing" Chase involves 90% simply pushing the button to advance to the next dialogue with barely any interactivity to speak of. Sadly even this doesn’t work properly; the game may unreliably jump to the next dialogue when you press A to speed up the text, and the only way to make sure you don’t skip over important information is to sit back and allow the dialogue to proceed at its own moderate speed. The dialogues take place on the bottom screen, imposed over a still background of the interview room, while the actual character portraits and their occasional facial animations fill up the top screen.

There are only two types of interactions beyond this: at various times during each interview you’ll be given dialogue tree options, primarily to test your memory of the details you’ve already read and verify your continued understanding of the story progression. Selecting the wrong option brings down a “health” bar, Phoenix Wright-style, and reaching the end of the bar takes you to a Game Over screen with the option to restart that interview. The only other “game” aspect comes from a couple moments where you’re called on to use the 3DS stylus to identify points of interest on an image of the crime scene, which is not enjoyable due to the poorly-detailed drawing, made worse by the small size of the 3DS screen and the resolution limitations. 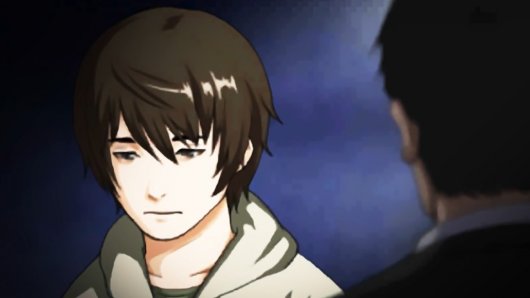 The entirety of the story takes under two hours to play through. The ultimate twist is an interesting reveal, but by the time it happens you will surely have tired of the endless parade of interviews and uncomfortable partner interactions. The only visuals to speak of, other than the roughly sketched crime scene depiction, are the very average character drawings, with no 3D effects present. In the background, the music is too upbeat and synth-y to fit the dour mood of the dialogue and the underpinnings of murder.

Even at its budget release cost, the brief length and lack of interesting content mean Chase is still overpriced for what you get. Ultimately, I cannot recommend this game even for Cing fans. If you want to read a short story detective mystery, there are hundreds of better options available through an online book retailer—and certainly, many of them have a main character with at least some redeeming qualities.


Shows just enough promise to hold your attention, but is buried under too many problems to be enjoyable.

GAME INFO Chase: Cold Case Investigations - Distant Memories is an adventure game by Arc System Works released in 2016 for 3DS. It has a Stylized art style, presented in Realtime 3D and is played in a Mixed perspective.