Bolt Riley: A Reggae Adventure is a very traditional point-and-click game with a decidedly nontraditional setting. The story of Bolt Riley, a 1970s Jamaican youth trying to survive life as an underdog in a world of rude boys and fulfill his dream of becoming a worldwide musical star, is analogous to the journey of the game’s production. Israeli developer Adventure Mob surprised the adventure world when they were selected as the developer for Leisure Suit Larry: Reloaded, but that assignment was later transferred to a more established developer instead. The concept of Bolt Riley was born in its place, and sent to Kickstarter where it promptly raised less than 50% of its original goal. Not content with being a defeated underdog, Adventure Mob stubbornly returned to Kickstarter for a second time with a more modest goal and came back to (barely) succeed.

Now after more than two years of development, the story of this Jamaican boy, his passion for music, and his journey to follow his musical dreams has finally arrived. Well, sort of. Actually, the Bolt Riley that was released on its much-celebrated and guaranteed release date of April 20th at 4:20am, a date and time that was set in stoned just in case you didn’t get all the drug references that were baked into the game’s Kickstarter updates—is a Steam Early Access game and is called Chapter 1. But with only four scenes and less than an hour of playing time, it is much more akin to a prologue—or in reality, a demo.

Bolt Riley uses a very traditional 2D interface, with a slightly clumsy change to the traditional two-button mouse control: left-click is always set to “look” by default, but instead of right-click performing the logical action (if any), instead it merely cycles the cursor to that option, requiring an extra left-click to perform. This is even true in inventory, where it’s likely you’ll want to “use” an item most of the time. A few extra clicks is nothing serious, but it’s a rather inelegant modification to established genre conventions. There is one interesting new feature: a separate quasi-inventory referred to as your “passion.” This is where you permanently store the things in life that inspire you, which you can make use of as though they are standard inventory items. This mechanic fits well with the story of Bolt, the young boy making his way from slums to stardom, though it does not get much use in this abbreviated episode. 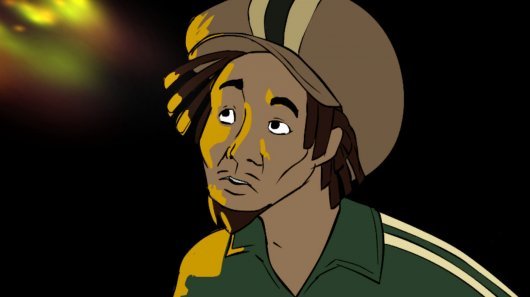 The game’s puzzles are of the traditional inventory-gathering and combination strain. Items are never obscure or difficult to find, and their usage is always sensible. The dialogue trees are a little bit more challenging to get through; some move forward regardless of which option you choose, while one requires you to re-initiate many times to entirely exhaust the options. Neither of these actually meets the goal of a well-designed dialogue puzzle, which is to pick one correct option around many, but at least the inventory puzzles seem to be in line with the lighthearted tone.

Despite the painful attempts to connect the game with references to marijuana, which one can only assume were done to give the game an edgy attitude, the writing is positively mellow and family-friendly. It’s also not a very funny game, with the jokes that are present a lot more of the juvenile variety. The game opens in the future with you as Bolt Riley about to lead your band in a triumphant concert. We’re ready to go, ready to count off the first song, and then suddenly—“Wait! I forgot me drumsticks!” says your overly-relaxed drummer—something you’d think would have come up before this exact moment, but that’s the type of harmless but less-than-subtle humor that you can expect to find. In fact, with the positive tones of Bolt Riley’s heroic journey, this could actually be an adventure to play with the kids… if you’re prepared to explain away the occasional weed humor.

There are only a handful of locations to explore but the painted backgrounds look nice, if a little too washed out in places with the heavy sunlight effect. What does not look good, unfortunately, is the amateur animation of the characters. The NPCs inhabiting the world do so with very few frames of animation, causing their appearance to be very stuttery. Bolt’s turning animations while walking are equally awkward. Most distracting is the lack of lip-synching, replaced by big repeating mouth movements that don’t even stop when the character’s voice-over is finished, though it’s worth noting that the developer stated on release day that lip-synching was a high priority addition. 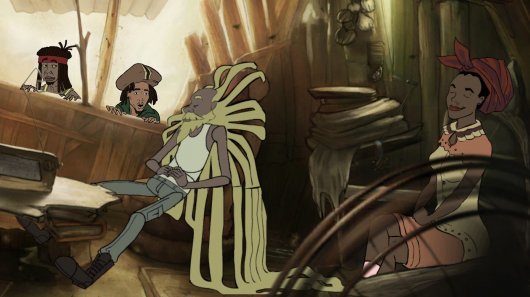 The game is set in Jamaica, a land with a very distinct dialect, so the voice acting is very capable of making or breaking immersion. Thankfully this is one of the stronger areas of the game. Professional voice-over artist Jason Linere White is outstanding as Bolt Riley, and frequent indie adventure contributor Jesse Lowther’s deep and dry baritone narration shines here with a bit of an island affectation. The voice actors commit to the performances and often bring humor to lines that the script itself doesn’t necessarily provide. One of the game’s best ideas is the ability to switch the language from English to Jamaican; although the latter isn’t voice-acted (add that to the list of things that Adventure Mob promises to add), it does flip the text to authentic Patois dialogue, which is actually quite a bit of fun to read aloud. The soundtrack by Omri Lahav is also very enjoyable, when it’s playing. The laid-back original reggae music is flawlessly in accord with the setting, but goes away for stretches of time. It’s hard to tell if that’s by production design, or if it’s perhaps one of many bugs.

Of course, games of any genre have a hard enough time releasing error-free no matter how much of a runway they give themselves, and with Bolt Riley irrevocably tethered to its 4/20 release date, some glitches and bugs could be expected. The occasional occurrence of dialogue lines with no apparent voice-over, skipping by with text only, are distracting. The bug that causes the use of an improper item-on-item inventory combination to close your inventory entirely is forgivable. I guess I shouldn’t even mind the fact that the game crashed back to desktop at the end, since I was done anyway. However, there is a ridiculous bug that occurs when loading a saved game that freezes everything. Pushing the Esc key wakes the game back up and allows you to continue, but it’s a rather alarming example of something that should have been fixed before release, even for a game still insisting it’s in Early Access. It’s no surprise that it features the largest “Report Bug” button I’ve ever seen in an in-game menu. Saving your game, though, may not be an issue since the game is so short and can really be completed with no difficulty in one sitting.

Overall, Bolt Riley—based on the small portion of it that is present here, which I again would submit is little more than a demo—is a cute game with a couple beautiful backgrounds and some very cool music, but overall is far too juvenile in its humor to incite a lot of interest in mature gamers. We are not expected to receive the remainder of the game until the same cannabis holiday in 2017, and even if you were excited to visit the rest of Trenchtown, you’ll have forgotten why in a year—with or without the potential aid of forgetfulness-stimulating narcotics. My advice would be, unless intentionally purchasing it to support the rest of the game's development, is to find something better to play for an hour and consider revisiting this one when it’s fully available. Or, you know, just grab some munchies, lay down in a dark room, and ponder things, man.

WHERE CAN I DOWNLOAD Bolt Riley: A Reggae Adventure – Chapter 1

Bolt Riley: A Reggae Adventure – Chapter 1 is available at:

What our readers think of Bolt Riley: A Reggae Adventure - Chapter 1