N.E.R.O. (Nothing Ever Remains Obscure) review

Adventure games by Storm in a Teacup

A small boat on a vast sea is propelled toward a rocky shore at sunset with one passenger aboard. You are nameless, robed in black and masked in eerie blue. Words echo in the distance: “Out beyond ideas of wrongness and rightness, there is a field. I will meet you there my beautiful hypocrite.” Though the title promises transparency, N.E.R.O. (Nothing Ever Remains Obscure) keeps its secrets bottled tight, releasing them languidly during its 8-10 hour length if you take your time to uncover them all. Like the story themes, the game is dark, set almost entirely at night, with neon-bright details illuminating the scenery. It’s an often impressive, sometimes murky, frequently frustrating journey through the landscape of grief that is part poetry, part mystery, and part puzzle-palisade.

It’s at first unclear who you are and why you have landed in a distant, out-of-reach place, one supposedly known only to a band of fierce sea brigands. Three characters guide the plot: the beautiful hypocrite, the ailing child and the truth-seeker. They are represented by dialogs overlaid against the backgrounds in glowing light, each preceded by a specific symbol. As the story unfolds, you will match the characters with the symbols, begin to sense their personalities, and eventually even catch glimpses of them. You will also start to build context for the fantastical texts that hover near the pathways along the way. The story takes a couple of bleak turns before a final epiphany, exploring themes of resiliency and the lack thereof in the face of tragedy. A few of the passages feature a pleasantly gravelly male voice, which speaks mostly during the opulent cinematic sequences. 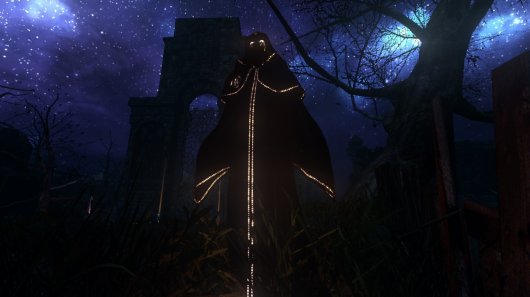 Though the exteriors are lovely, they are also a source of frustration. The constant darkness – despite its neon-burnished accents – is hard to navigate. It’s amazingly easy to get lost if you go off the main pathways, and you must go off the pathways if you choose to collect the story fragments that fit into a photographic frame. I spent a lot of time fumbling around, wondering whether I was wandering towards a goal or merely going in circles, and banging into barriers that were so dim I had to feel around to find where they ended. All this bumbling about means that progress can slow to a snail’s pace. You can see where you’re going more clearly if you adjust the gamma setting in the Options menu. Unfortunately, this washes out the graphics and emphasizes the background scenery that pops into existence only as you approach it. After trying both ways, I decided to keep puttering in the shadows.

Navigation through the gameworld uses the mouse to pan and the WASD keys to move; pressing the shift key allows you to run. The controls also work fine with twin gamepad sticks, which is no surprise as N.E.R.O. was originally a console exclusive, though a toggle-to-run option would have been greatly appreciated. The game uses autosave only, a function that usually activates immediately after completing a puzzle. If you find a photo fragment but don’t complete a puzzle after that, the save system will still remember that you have the fragment, though it will return you to the same physical spot where the last autosave kicked in.

Barriers abound in N.E.R.O., including contraptions that have to be activated, light poles that must be lit up, rings that should be aligned, and markers that need to be stepped on in sequence. These devices usually open up new pathways or gated areas. The puzzles start out easy but get tougher as you go, and a sprinkling of optional challenges will keep you even busier if you’re a completist. There is no traditional inventory feature. Instead, many obstacles are overcome by aiming and throwing orbs of light at targets (with left and right mouse/gamepad buttons, respectively). Although generally fair in difficulty, one late example is deviously unforgiving when figuring out the correct distance and angle. Aggravation ensues when the timing requires painstaking precision yet movement via the keyboard controls is never painstakingly precise. 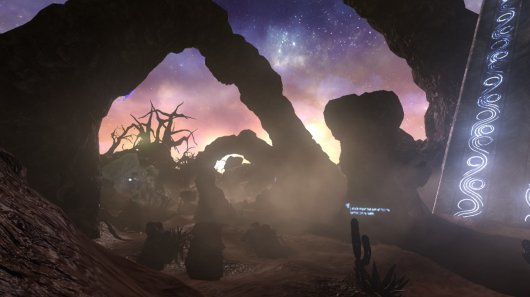 You also acquire a companion partway through the game – a person who, like you, is robed in black and with whom you never openly communicate. This sidekick follows wherever you go; you can control his movements with the spacebar, so he occasionally cooperates with you to solve puzzles. (Be warned that your companion, when used incorrectly, can make timed puzzles even more difficult.) Once you have completed the game, you can revisit the locales via a handy chapter-return feature that allows you to solve any remaining optional puzzles or find photo fragments that eluded you the first time through.

As annoying as I sometimes found the timed puzzles as they occurred, in looking back after finishing the game I think they also detracted from the overall experience. N.E.R.O.’s scope is already ambitious, with sometimes confusing environments to explore and photo scraps to find in the farthest corners, as well as seemingly non-related narrative texts to make sense of, plus characters that at first aren’t even identified by name. With such an already complex mix, abstract timed barrier puzzles – the type that requires lots of repetition – just end up abruptly halting the pace and don’t advance the plot in any way. 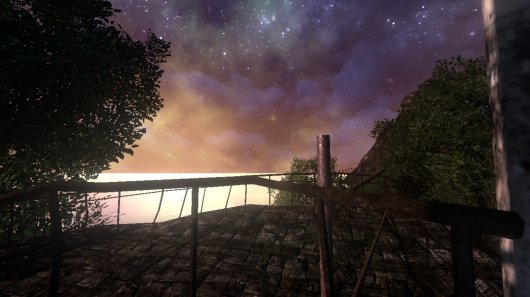 You won’t fully realize what’s going on until you see N.E.R.O.’s ending. Unlike some other adventure endings I could name, this one isn’t a disappointment – it is not a cliffhanger, it isn’t wildly ambiguous, and it doesn’t elicit a tepid “meh” reaction. This finale is beautifully animated and resolves much of the mystery as to the reason for your journey. It’s a sequence that everyone who plays the game really ought to see. Yet, according to the achievements page on Steam, only about 15 percent of players have actually managed to finish the game. What’s holding people up? Could it be (for instance) having to dash repeatedly across stone disks in order to reach the last one just as an electrical charge powers a door? It seems a pity if this sort of timed puzzle, combined with difficulties navigating in the dark, or perhaps the lethargic way the tale unfolds as a result, is keeping players from seeing how the story ends.

N.E.R.O. is a work of art shrouded in darkness, both physical and thematic. The locales are cryptic and enticing and the cinematics are marvelous. The plot explores aspects of human brokenness, including despair and denial, as well as devotion and true grit. This game will appeal to those who enjoyed Dear Esther but were hoping for puzzle challenges to balance the exploration. It will also reward players who delight in piecing together disparate aspects of a story, despite a sluggish pace and fiddly timed puzzles that drag out the chance for closure. And for gamers who can embrace darkness while waiting for the light, it provides a touching final revelation.

GAME INFO N.E.R.O. (Nothing Ever Remains Obscure) is an adventure game by Storm in a Teacup released in 2015 for PC and Xbox One. It has a Illustrated realism style, presented in Realtime 3D and is played in a First-Person perspective. You can download N.E.R.O. (Nothing Ever Remains Obscure) from: We get a small commission from any game you buy through these links.
The Good:
The Bad:
The Good:
The Bad:

What our readers think of N.E.R.O. (Nothing Ever Remains Obscure)