The idea of a seemingly happy place hiding dark secrets isn’t exactly a novel premise at this point, but when a story based on the idea is done well, the suspense and intrigue can be thrilling. Such is the basic conceit of Mystery of Rivenhallows, the first foray into the traditional adventure genre by Mexican indie EnsenaSoft. Unfortunately, aside from a handful of mediocre puzzles to provide a mild challenge, there’s nothing at all thrilling to be found in this casual puzzler, with a near-non-existent story and bland environments topping off this brief, uneventful snooze-fest.

The first-person point-and-click title centers on the eponymous orphanage and the unexplained disappearances of various children placed under its charge. You, as a former resident of the now-shuttered Rivenhallows Orphanage, remember a time before the disappearances began, when the orphanage was, in fact, a happy and peaceful place. Now, many years later, you have come back to investigate the long-standing questions surrounding the disappearances and hopefully uncover answers.

All of this sounds promising for a mystery-adventure story, but there really isn’t anything you could identify as a plot here, aside from expositional cutscenes book-ending the opening and closing moments of the game, providing a bare minimum of context for the puzzling. There are no journals to read and no other characters to interact with, unless of course you count the ghost-child who briefly appears near the beginning of the game. It would have been at least a minor improvement if the game followed through with its tease of supernatural goings-on, but sadly this attempt at a jump-scare doesn’t lead anywhere. The ending, which is predictable in the extreme, falls flat as well, mainly because the attempts to invest the player in the outcome, in the form of a few narrative tidbits from the unnamed main character when encountering certain items or rooms, are uninteresting themselves. 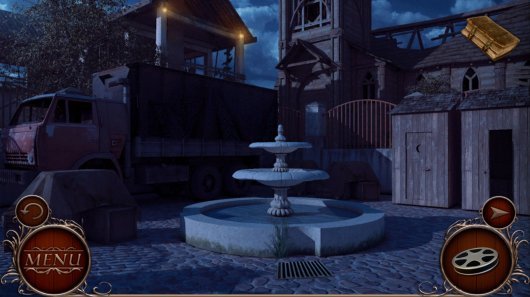 Puzzle-wise, Rivenhallows fares somewhat better, but not nearly enough to make up for the complete lack of story. There’s a good mixture of both logic and inventory puzzles scattered around the deserted halls of the orphanage, with clues that you click on to place in your guidebook (which sits in the upper-right of the screen), such as various pictures and writing on chalkboards. Inventory puzzles generally (though not entirely) involve matching keys to the correct lock in order to gain access to a new item or area. A few of the logic puzzles are clever, such as a dollhouse safe that requires using colors on old-timey drawings found around the orphanage to determine which window shutters should be opened or closed to reveal a necessary trinket.

However, most of these puzzles are very easy to solve. In fact, I “solved” several of them accidentally simply by fiddling with buttons or dials a few times, only to come across the now-unnecessary clue some time later. While plenty of games allow you to potentially solve puzzles without actually having the clues first, this is really only acceptable if the solutions are difficult enough to make stumbling on them by accident unlikely. There were a few times I wasn’t completely sure what to do next, primarily because there is no hotspot indicator to show what can be clicked on in a scene, leading to some frustrating “click everything” moments in the more-cluttered environments.

Players interact with the game using the mouse, and while the slideshow-style presentation is reminiscent of games like Myst, the odd navigation scheme takes some getting used to. You are locked into a predefined path in a way that’s reminiscent of a rail-shooter game, complete with a starting point (the front door of the orphanage) and an end-point (the orphanage courtyard). You can’t even turn and look left or right within a location. You can only advance forward by clicking in the scene, or back using the arrow icon in the lower-left corner. A few rooms, including hallways, have forks in the path so that multiple locations can be reached from one scene, but you must always “back out” of a location to go to a previously-visited scene. This kind of hyper-streamlining makes an already-bland experience falter even more by removing the prospect of exploring. 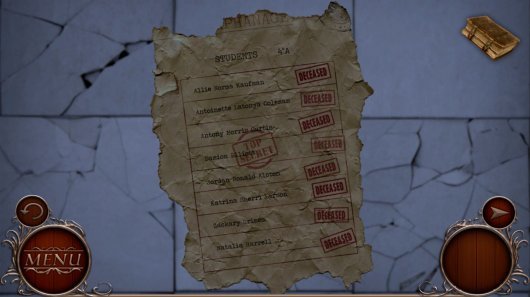 Not that I necessarily want to explore Rivenhallows Orphanage any more than I already have, with graphics as uninteresting as this. It’s not that the graphics are bad, really. In all fairness they are nicely drawn, and sort of occupy a grey area between photorealism and cartoonish, but there are a lot of browns, greys, and other earth tones on display, which is a very drab palette. Interspersed throughout are a few colorful props and lightbulb-based puzzles that provide a small amount of color, but not enough to offset the overwhelmingly bland color scheme.

Aside from an old reel-to-reel film that you come across during gameplay (and no, it’s not story-related), there’s very little animation to be found anywhere, save for some puzzles that feature moving dials and other such features. The two cutscenes at the beginning and end of the game consist of a series of still images with elements that fade at appropriate moments, such as students fading from their seats as the main character describes how each of his friends disappeared while he was at the orphanage.

Sound effects such as rattling doors and clicking dials are well done, if sparse and utilitarian. There is no voice acting, even though the main character has only a few lines of dialogue. The music consists of what seems to be a single looping orchestral track that miraculously manages to avoid becoming obnoxious over Rivenhallows’ 1-2 hours of play time, mainly by being longer than the typical adventure game tune. 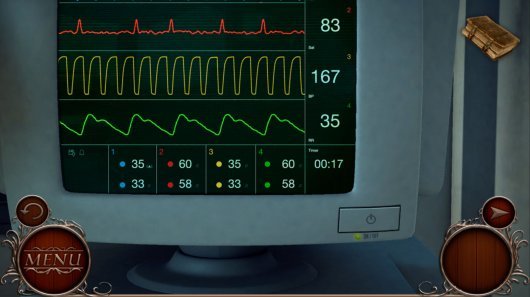 It always pains me to see a game like this, because there is a glimmer of a good idea, faint though it may be, buried somewhere beneath the problems. There might be some brief entertainment in the few clever puzzles the game offers, but the ease with which they are solved – to the point that you can solve some by accident – smothers most of the challenge. Playing it for the story isn’t really an option, considering that it mostly consists of an introduction and the denouement, and nothing much in between.

I’ve honestly tried to figure out who the target audience is for Mystery of Rivenhallows, and I have to admit that I can’t think of anyone, nor anyone I might recommend this to. Beginners can surely find better introductions to the genre than this, and veterans will likely just be bored to tears. It’s not a complete waste of money or time (as long as it’s cheap and you have no other titles you haven’t played yet), but don’t look for anything remotely fulfilling to come from the experience.

Mystery of Rivenhallows isn’t a terrible game so much as a terribly underwhelming one – a short, easy, bland adventure whose budget price is its main redeeming quality.

GAME INFO Mystery of Rivenhallows is an adventure game by EnsenaSoft released in 2016 for PC. It has a Illustrated realism style, presented in Slideshow and is played in a First-Person perspective. You can download Mystery of Rivenhallows from: We get a small commission from any game you buy through these links.
The Good:
The Bad:
The Good:
The Bad:

What our readers think of Mystery of Rivenhallows