Midvinter is Talecore Studios’ debut adventure game, though an extremely short one. Clocking in at only about half an hour in length for a single playthrough, the game follows a gnome as he attempts to save a family living on a Swedish farm from the evil troll that plans to take their human child and switch it with a changeling. Midvinter certainly has a cozy feeling to it with its hand-painted art and leisurely pace, so it’s a shame that the story falls short in capitalizing on its distinctive folklore and that some of the gameplay mechanics get tedious, particularly upon replay.

The plot of Midvinter is a simple one: you play as Nisse the gnome, who must gain power either by helping the humans around the farm or by doing favors for the Skogsra, a powerful spirit of the forest. You have only two nights available to grow strong enough to defeat the troll before it returns to take the human child. One of the best parts of the game is the fact that there are four different endings, though only one is truly happy. Which ending you get depends on how much power you accrue by doing chores around the farm and how firm your alliance is with the Skogsra. Unfortunately, seeing a new ending means replaying the game over from the start and simply attempting more tasks or in different combinations.

No matter which ending you get, the premise remains simplistic and the characters very shallow. Every creature you meet comes across as generic in personality, which is especially disappointing because apart from the human family, they are all based on creatures from Scandinavian folklore. I learned so little about characters such as the Nacken (a forest spirit who sits naked with a violin) and the Vattar (basically cranky dwarves) that I had to look them up on Google to find out what they actually are. The game does little to capitalize on its use of lesser known mythical beings – it could remove all the snow and swap them out for English folklore equivalents and it would not make a difference, even though it should. In addition to expanding on actual characterization, at the very least Midvinter could have been improved by adding informational tidbits, either via pop-ups to click on throughout the game or by having an encyclopedia accessible from the menu screen, maybe by way of optional collectibles. 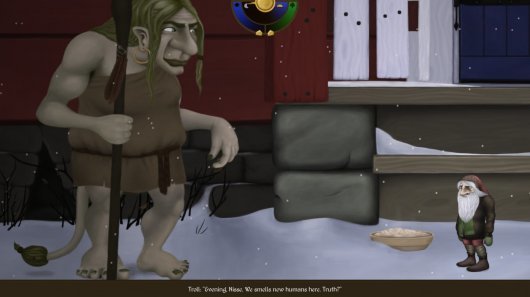 The mechanics are easy enough to grasp, but there is an optional click-through tutorial on the menu screen that explains how to move and use items. Clicking on a hotspot brings up both eye and mitten icons, the eye for examining and the mitten for interacting with the object. The inventory is accessed from the bag at the bottom corner of the screen, and you move around the farm by clicking your desired location on the map that Nisse finds at the beginning of the game.

Additionally, there are three bars at the top of the screen, one that indicates the time till morning, another that shows your level of friendliness with the forest spirits, and a third that displays your power level from helping humans around the farm. In order to achieve a perfect ending, the latter two bars must be filled completely. While that may seem like a simple enough feat, Midvinter has a fast-moving clock which makes it extremely difficult to accomplish both over the course of just two nights. The clock advances in simulated time regardless of whether or not you perform actions, though moving around the farm does speed it up. I would have preferred a little wiggle room added, as playing the game more than a few times can get frustratingly dull.

Navigating within the individual environments is done by clicking where you want Nisse to go. Thankfully, if you double-click it jumps straight to the end with Nisse already at his destination. Though this is a bit jarring, it’s a much better alternative to sitting through what may be the slowest walk cycle I’ve ever seen in a video game. Even an average walk speed would be a nice compromise between the two. 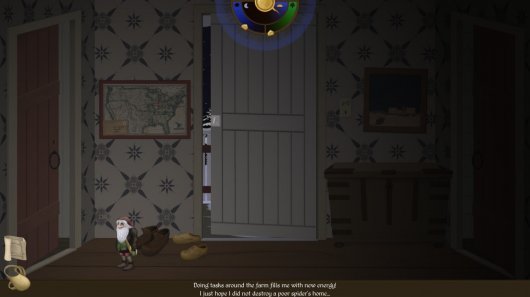 The sound design is basic but it works quite well. There’s background music of soothing Scandinavian folk tunes playing the entire time, and a few appropriate sound effects that punctuate the experience, such as digging holes in the snow and the Nacken’s violin playing. There is also voice acting for conversations with an attempt to provide different accents and speech patterns for different creatures, though it’s generally not very well done, conveying very little emotion throughout. On the plus side, the game avoids some of the common amateur mistakes, such as using only one or two actors or having ridiculously overdramatic performances.

The artwork in Midvinter is quite pretty. According to developer Anna Jenelius’s own description, it takes inspiration from John Bauer and Alvaro Tapia, among others. The style is like a soft acrylic painting with uncluttered landscapes and an adorable little mitten icon as the mouse cursor. It’s wintertime in the rural 19th century setting, and there’s snow everywhere. All of the locations you visit are in and around the farm, as it is implied that Nisse can’t leave. My favorite scene was the stream where the Nacken plays his violin, surrounded only by snowy evergreens. Details for many scenes are sparse and there’s a minimum of ambient animation, apart from some snow falling or the horse in the barn eating hay. While Midvinter doesn’t boast a polished professional style, being neither realistic nor stylized enough to really stand out, it does look better than many games, and indeed the painterly look is the main reason the game evokes such a charming feel. 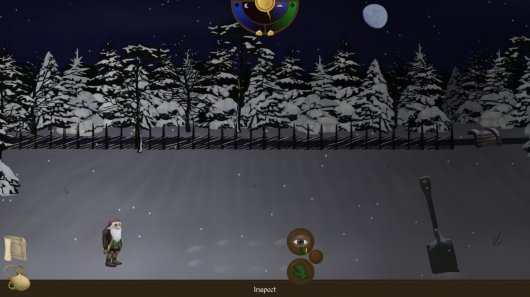 The gameplay in Midvinter doesn't really involve conventional puzzles so much as simple obstacles to overcome. There are some very basic inventory tasks, but there’s never anything so complicated that you spend a while searching around for the right item to use, as the game doesn’t give you enough time to do so. The biggest and hardest “puzzle” of all is probably just figuring out how to get all of the chores done in two nights so that you can achieve the perfect ending. They need to be done in a precise sequence to fit them all in, and even the best ending doesn’t feel like an adequate payoff for all the extra trial and effort required. By the time you achieve it, you may be so annoyed by that point that you wondered why you bothered. The chores themselves are extremely basic like “get potatoes for the Vattar” and “untangle yarn.” The latter involves nothing more than pressing a button to complete the task, and none of them actually require much thinking.

Midvinter is actually a decent little game, though for something that touts itself as a cross between Monkey Island and Over the Garden Wall, it is neither funny, deep, nor imaginative enough to really warrant such a comparison. While it is impressive that the game was created by just one person (and a composer), its flat characters, sub-par voice acting, and lack of story and gameplay depth left me feeling like it might have been improved by collaboration to expand its scope. Still, if you have an interest in the unique setting and culture of Scandinavian mythology and want a relatively challenge-free game to finish in a single sitting, Midvinter would certainly fit the bill.

While Midvinter starts with a unique premise and a lot of cultural history to draw from, its extremely short length and lack of complexity leaves it feeling rather shallow.

GAME INFO Midvinter is an adventure game by Talecore Studios released in 2016 for Android and PC. It has a Stylized art style, presented in 2D or 2.5D and is played in a Third-Person perspective.

What our readers think of Midvinter

Cute but far too short and simple

Before I started playing, I was reminded of the excellent The Frostrune, which I had played and thoroughly enjoyed 3 months previously. I was hoping Midvinter would be something similar. Well, it partly is, but... Read the review »