The Detail: Episode 1 - Where the Dead Lie

Thief of Thieves: Season One

The sprawling concrete jungle has been host to more than its fair share of gritty crime stories and police procedurals. In any given form of media, it provides fertile ground for great drama, intriguing characters, and edge-of-your-seat action. Small wonder, then, that developer Rival Games tapped into this setting for its three-part crime thriller, The Detail. What emerges, though, is a game with a lofty premise that struggles with its own format, not quite able to overcome the limitations of its episodic presentation, even after the fact.

The Detail, which debuted with Where the Dead Lie in 2014, followed by From the Ashes and Devil in the Detail in 2015 and 2016, respectively, splits its time between a trio of characters as they trudge through the red tape and corruption inherent in the justice system of an unnamed contemporary metropolis. The main protagonist is Reggie Moore, a veteran Detective who, over time, has taken to viewing the letter of the law as more of a mild suggestion than the rule. Through years of dealing with the lowest of the low, it’s Reggie’s jaded outlook on the system that colors much of the game’s bleak tone. As Reggie and his partner Tyrone begin to investigate the brutal execution of a well-known player in the city’s drug game, murdered under an abandoned overpass on a rainy night, they bring in former gangbanger-turned-informant Joe Miller, who has been trying to get away from his old life and raise a family. Over the course of the game, control switches between Reggie, Joe, and Katelyn Hayes, a rookie cop with her own personal stake in seeing the perps taken down. By the end of episode one, these characters are reassigned from their respective duties to form the specially appointed task force from which The Detail takes its name.

Certain sections of the game sport a distinctive comic book look, with black-and-white panels – some partly animated – sliding across the screen with accompanying speech bubbles and phonetic sound effects. In some of these scenes, a particular element may be emphasized with a single splash of color in an otherwise starkly contrasting monochromatic world. It’s a style reminiscent of such Frank Miller books as Sin City, and it fits well with The Detail’s mature tone (apparent from the first few moments of gameplay, which involve stopping a psychopathic serial killer from abusing and killing a kidnapped child). 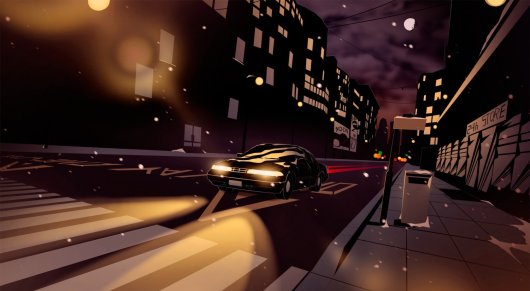 The visuals soon take a different tack, however, with the majority of the game taking place in full-color point-and-click sets. While I have no problems with the different graphical approaches for different beats in the story, especially on a shoestring indie budget, the inconsistent implementation left a few things to be desired. Some characters’ in-game models look jarringly different than the hand-drawn comic-style cinematics, to the point of being barely recognizable when the visual mediums change, while a few others look like each other’s long-lost twins, their dialog close-ups using the same model with different hair attached. In one unfortunate case, a character’s portrait simply doesn’t exist and has been replaced with a large pink rectangle during conversation.

For much of the first episode – that is to say for about 90 minutes or so – events are centered around the slaying of drug boss Arkany, as Reggie and Tyrone follow up on leads found at the crime scene. However, each of the two subsequent similar-length episodes largely follows its own track, with a different crime taking center stage. With the overarching story only occasionally connecting and moving forward, it is hard to really follow the meta-narrative with any gusto, and by the time events come full circle at the end, it barely feels like anything has really been solved. Instead, the game serves up a surprise twist that marginalizes most of the entire preceding investigation – and the player’s choices – as irrelevant. It’s not that such unpredictable moments are necessarily a bad thing, but this one certainly takes the wind out of the game’s sails at least a little.

And that’s a shame, because The Detail’s story features some genuinely good ideas: undercover gang infiltration, a detective battling his own demons at least as much as he battles the system, and a city-wide political conspiracy. But on the gameplay side of things, it’s less exciting. Each episode features a major crime scene to investigate by examining evidence, drawing conclusions, following up on leads, and even solving a mild puzzle or two, like unlocking a door or correctly deducing a vital clue. 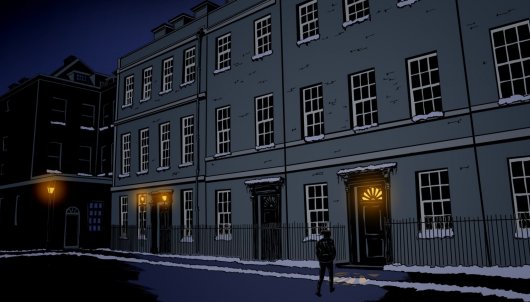 A few more engaging puzzles do exist, such as using a map of gang territories and a photo lab watermark to determine the location of a suspect in the murder of Arkany. Yet even then, once they’ve arrived Reggie and Ty must find a way to enter the building without a warrant. Seems like a perfect opportunity for a more traditional adventure game puzzle, but in the end there’s very little thought or reasoning required to gain entrance, as the solution is made obvious after a quick peek in through the house’s rear entrance. Even the actual “detective work” is a pretty drab affair of simply clicking on each item of note at a crime scene, reading text, maybe selecting the best choice from a list of possible interpretations of the clue, then moving on to the next location. There isn’t much deduction taking place, nor any actual investigating using the tools of the trade to offer some gameplay variety.

When not spending time at crime scenes, Reggie & co. travel to different locations like the police station, the local strip club, and various residences around the city. You are free to explore each location at your leisure, though the scope of the areas turns out to be limited, with only a small handful of hotspots in a room available for examination. More often than not, the goal is to initiate conversation with a particular character, which will then automatically move the story forward, though on one or two occasions after being deposited at the police station, an unexpected puzzle presented itself to be solved: Why am I here, and what am I supposed to accomplish? 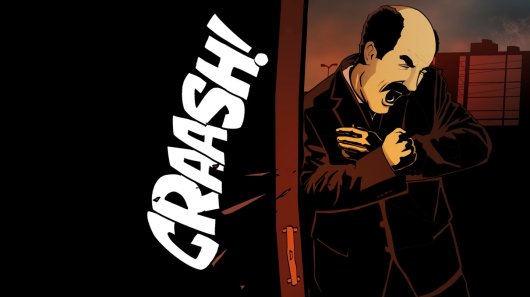 The Detail is almost entirely linear, much more than one would be led to believe by the presence of certain choices in both dialog and gameplay. In one instance, you can decide whether to break down a door without a warrant during an investigation or come back later, potentially giving the suspect time to do away with evidence. Another time, Joe is sent out to extort protection money for his gang and send a message to the rival mob boss, which can be accomplished in various ways. But these decisions amount to little more than window dressing, with the exception of one or two choices near the end of the game that subtly impact the ending. Still, there are a few high notes that lead to some nice character-driven moments, such as when Joe tells his daughter a bedtime story to put her back to sleep, which changes based on player input at certain points within the game. It may have no bearing on the greater plot, but these personal touches are something The Detail could have benefitted from having more of.

Lacking any voice-over, it was really up to the writers to capture and sustain player attention. In attempting to present situations as realistic, particularly within the ethnically-segmented gang world where one consists of Latinos while the next is made up of African Americans or Asians, the dialog is faced with a tough balancing act. It has to convey an authentic tone without straying into stereotypical over-the-top “Hollywood” territory. Though it does sometimes come dangerously close to crossing this threshold, the writers were largely successful in keeping the script grounded.

It’s actually the music that gets in the way of immersion instead. There isn’t much variety in the score, and what’s offered doesn’t amount to much beyond background filler. Uncomfortably noticeable, however, are the times when a track ends mid-scene, letting the remaining events play out in complete silence. Then, during the game’s climax and ending credits, music meant to make the ending more dramatic kicked in while the normal background track was still playing. 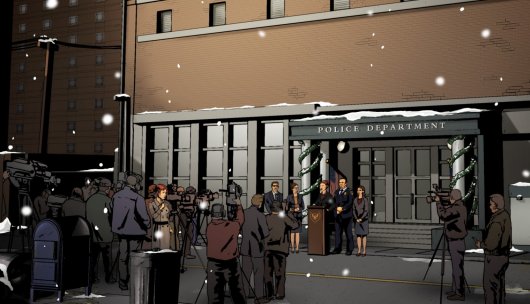 One aspect The Detail expertly nails is its uncompromisingly grim mood. It is filled with heinous acts committed by criminals who rarely shy away from extreme violence. Early on in the first episode, Joe Miller unwittingly bears witness to several muscled thugs sending a strong message by dunking another’s man face into a deep fryer filled with hot oil. At a later time, a boat propeller is used to gory effect to punish a henchman’s poor performance. Human trafficking, prostitution, child abuse, and police corruption are just some of the foul deeds the game confronts.

Still, it feels that for each step forward there is another step back. In a major misstep for a narrative-driven game, many of the characters and events aren’t given enough interesting on-screen time to be truly fleshed out. To name just one case, you will encounter a certain man multiple times in the police station. The lack of pleasantries between him and Reggie suggests some bad blood, something that would have been great to learn more about. Although he pops up several times and is casually referenced in conversations between Reggie and Ty, it took a special detour into the menu’s character dossiers to learn that the mysterious man is actually an Internal Affairs detective, and has had a history of butting heads with Reggie and his methods for some time. This is par for the course, as The Detail’s short episodic format doesn’t do itself any favors when it comes to character and story development.

In the end, The Detail is a gritty crime thriller that shows good potential, though these moments only shine through its shortcomings occasionally. The graphics, at times, feature a stylized, darkly mature comic book look, but suffer from inconsistent quality. The story aims and delivers an adult look at crime in the big city, but shortchanges itself when it fails to develop any of its three main characters enough to form a connection with them. Similarly underwhelming is the shortage of any meaningful gameplay, which just feels boiled down to the bare essentials, particularly given the opportunities for engaging in police work and methodically examining crime scenes for clues. The developers set out to create a grim, atmospheric story about crime, corruption, and the cops that deal with these issues and inevitably get caught up in them. However, the result is a three-part game that becomes immediately forgettable  once the final credits have rolled across the screen.

The Detail sets out to provide a memorable police thriller with visual flair, but can’t quite seal the deal in either storytelling or gameplay across its three-part narrative arc.

GAME INFO The Detail is an adventure game by Rival Games released in for Mac, PC and Linux. It has a Stylized art style, presented in 2D or 2.5D and is played in a Third-Person perspective. You can download The Detail from: We get a small commission from any game you buy through these links.
The Good:
The Bad:
The Good:
The Bad:

What our readers think of The Detail