Like the shambling hordes for which it’s named, it’s impossible to keep The Walking Dead down. From Robert Kirkman’s ongoing graphic novel series to the long-running television show to Telltale’s adven… err, interactive storytelling experiences, zombies are everywhere! After two full seasons, plus a single bridge episode and a mini-season in between, Telltale is back with their third five-part series pitting the living vs. the undead (and vs. the other living). Though the new season is subtitled A New Frontier, this iteration of The Walking Dead covers a whole lot of familiar ground. It looks a little glossier than ever, but otherwise this is essentially more of what we’ve seen before. Whether or not you consider that a good thing will depend largely on your appetite for revisiting the same themes with the same kind of choice-driven, gameplay-lite approach that we’ve come to expect.

Based on the twin-episode Ties That Bind debut, this season could well have been renamed “Los Muertos Vivientes” instead, as there’s a decidedly Spanish flavour this time around. That’s because the story primarily centers around Javier, a young man whose family we see both physically and emotionally torn apart in the opening flashback scene. Fast-forward several years, and Javy is on the run with his sister-in-law Kate along with the children of his volatile brother David, having been separated from him in the initial confusion. At least for now, this is very much their tale as we follow the four of them from the frying pan into the fire. There’s open but unfulfilled flirtation between the two young adults (they are ostensibly “family” after all, if not by blood), while Gabe is a brooding young teen and Mariana is a remarkably grounded and surprisingly optimistic youngster who’s content enough to listen to music on her headphones and find some occasional chocolate. There’s nothing particularly remarkable about them, other than their circumstances, but it’s a family you can find yourself rooting for – knowing full well that in The Walking Dead, that may be a bad idea.

The other playable protagonist will be instantly recognizable to series fans, as young Clementine returns from the first two seasons. She’s a little older now, on the verge of adolescence, though of course she has always been forced to be far more mature than her years. She’s also far more hardened than before, with some serious trust issues – an entirely reasonable development in a post-apocalyptic world where simply staying alive is a day-to-day struggle, and any attempts at community have ended up with betrayal and heartbreak. A far cry from her earliest days under the protection of Lee, here she is comfortable swearing, stealing, and threatening people as need arises, all in the name of survival. Clem plays a vital role in Javier’s story once they meet up on less-than-friendly terms, but we also get glimpses into her past as we begin to piece together what happened since last we saw her. 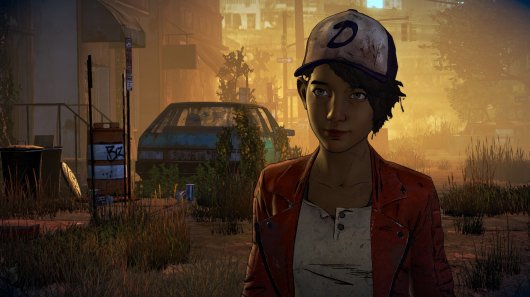 In my game, the flashback sequences consisted only of Clementine and baby AJ, whom Clem had taken under her wing at the end of season two. I say “my game” because A New Frontier gives players the chance to import saves from the previous season to resume the same narrative thread, or to create your own backstory with a series of decisions before you begin play. Having a sieve-like memory for details, I could barely recall how my previous actions had played out, and I found the initial options to be very difficult to choose between. I ended up with the “lone peacekeeper” role, so it’s possible your mileage may vary with different decisions made. Presumably none of it impacts present-day events, as AJ is conspicuous by his absence from the start, but it may well offer up some flashback variety. 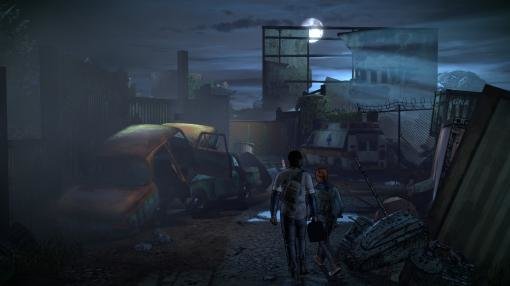 The ever-present threat of walkers is a constant source of tension, but while the zombies may be the brainless monsters, it’s the worst of people who are often the heartless ones. There are upstanding people too – or at least those willing to cooperate so long as it suits them – but soon enough you’ll find yourself caught in the middle of personal conflicts with no cut-and-dried answers and no way to appease both sides. Decisions are once again “remembered” by the affected party, for good or ill, though it’s not clear from a single playthrough how that impacts your relationships. I know some people resent Telltale games for the illusory nature of such choices, but I don’t mind so long as I feel the weight of my decisions the first time through. Not unlike life itself, you only get one crack to make spur-of-the-moment decisions, and must then live with the consequences without ever knowing how things might have turned out otherwise (unless you play again). 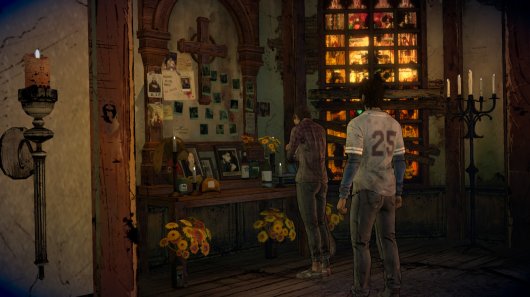 Where my acceptance breaks down somewhat is twofold. First, it’s not always clear from the options displayed what the protagonist’s actual response will be. One decision in particular played out FAR differently (read: worse) than I anticipated. I plowed on anyway, hoping it wouldn’t have serious repercussions, and fortunately it didn’t seem to, as it had the potential to be disastrous. My other reservation is being confronted by a blatantly binary choice between two BAD options. Granted, that’s a very real possibility in a world gone horribly wrong, but it can feel excessively manipulative, especially when you’re immediately browbeaten for your choice no matter which option you select. I am absolutely not advocating a “good” or “bad” choice instead, merely a more nuanced presentation of no-win scenarios. Picking the lesser of two obvious evils and waiting for the inevitable guilt trip doesn’t feel like genuine player agency. 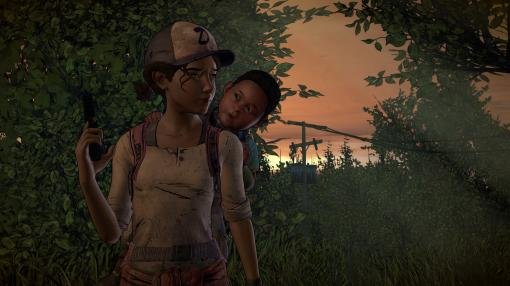 Timed choices are really the main gameplay element of A New Frontier, and some decisions are way more important than others. In between the lengthy interactive conversations, there are a handful of standalone wander-around-and-explore situations at a junkyard, a makeshift town built on a former airstrip, and an abandoned gas station. Here you’ll pick up an item or two to overcome an obstacle, but even these don’t really qualify as puzzles. The few hotspots are automatically highlighted by default, and there are so few interactive objects that their uses are blindingly apparent. It’s so easy that a walker could probably eat your own brain and you could still finish this game before you turned. There is also some fighting to be done, once again in the form of Quick Time Events in which you must button-mash, direction-swipe or timed-click your way through several encounters. It’s all fairly simple stuff, whether controlled by the keyboard/mouse or gamepad, but should you fail you’ll simply be returned to the beginning of the sequence to try again. 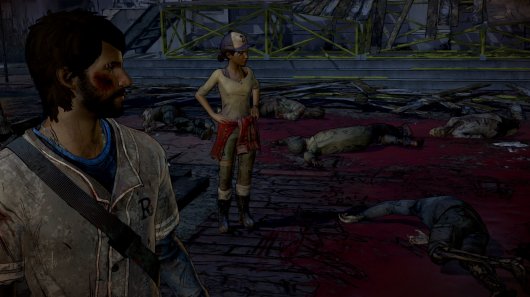 With gameplay taking a backseat, it’s the story and characters that represent the driving force once again. Unfortunately, there really isn’t much “story” here that we haven’t seen before, at least so far. The names and faces have changed, but the formula has not. Javier and his family are simply trying to stay one step ahead of the traveling “herds” when they encroach on the territory of some ruthless thugs who turn out to be a gang known as the eponymous “New Frontier”. A nearby town offers at least the promise of help and sanctuary, but confrontation is inevitable, both with fellow survivors and the undead. Where the story really packs a wallop, as it always does in this series, is its willingness to make death a very real and prominent feature. Ties That Bind is no exception right out of the gate; obviously I won’t spoil anything, but suffice it to say that no one is ever truly safe in The Walking Dead. 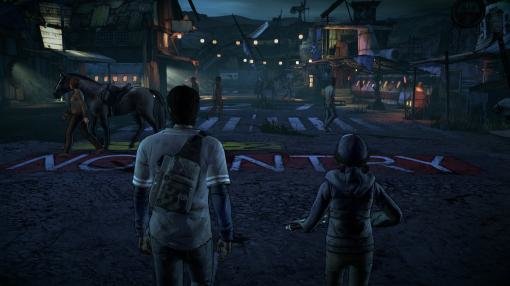 Whether you’ll miss anyone who experiences an untimely demise remains to be seen. Besides Clementine, who has the benefit of ten previous episodes of character development, none of the new additions are particularly noteworthy. Javier’s slightly sketchy background is alluded to once or twice, but never with enough conviction to make you think it’ll turn out to be important. As usual for this series, there’s a welcome cultural diversity on display, and most of the newcomers seem like genuine people doing their best in trying times. The villains, on the other hand, are nothing but bloodthirsty punks. Again, that’s probably realistic, and it’s a useful storytelling device to have someone to thoroughly hate, but I prefer a little more moral complexity. Of course, it’s early in the season yet, and a “holy crap” cliffhanger suggests there’s plenty more intrigue ahead.

Speaking of realism, A New Frontier takes the series a small step towards a more lifelike presentation, though it’s debatable whether that’s a good thing. Faces are now smoother and shinier, but this seems somewhat at odds with the thick black character outlines and sketch-style shading that hearken back to the series’ graphic novel origins. Lighting effects are much more prominent this time around, and the artists were eager to show them off, as much of the first episode takes place under the glow of moonlight, while the second installment includes a creepy tunnel crawl illuminated only by flashlight. Otherwise, the game looks much the same as its predecessors, notable more for its highly cinematic style than for its actual set design.

What our readers think of The Walking Dead: A New Frontier - Episodes One/Two: Ties That Bind