Every gamer from the ‘80s and ‘90s will vividly remember large pixels staring at them on a CRT monitor, with characters moving across the screen as they pointed-and-clicked. It’s surely when some of the best adventure gaming memories occurred for many of our readers. This retro style has been making a return in recent years in new titles like Paul Pixel: The Awakening, a game that is all about giving you that feeling of playing the early classics. The creation of German studio Xoron, released for iOS and the Mac, is reminiscent of a bygone era that is trying to draw you right back in. I’m a sucker for pixels and nostalgia, so I was naturally very interested in diving right into the game to see if it lived up to the era it’s trying to emulate.

The adventure starts off with a big spaceship approaching Earth, alarms sounding worldwide due to the impending attack. As a massive alien craft starts landing on a beach, a tractor beam is activated, sending the first wave down to invade. Did I say aliens? More like zombie aliens! Enter Paul Pixel, your average joe who’s at home while panic spreads outside. As Paul turns on his television, we see the latest news bulletin announcing that zombie aliens have overrun the entire world. If The Walking Dead taught us anything about when streets are infested with zombies, it’s that you get the hell out of the city!

We don’t get any further context on who Paul is or why he is the protagonist. There seems to be no particular reason beyond representing the everyman. Due to a chain of events that pan out while playing as Paul, you end up needing not only to escape the city but save the world from an impending apocalypse. This quest sends you off on a goofy adventure that leads you to driving your creatively repaired minivan around while dodging zombies and eventually, purely out of self-interest, deciding to be a hero. The game could have gone a lot deeper into the protagonist’s actual character, as there’s very little attention given to what his life is normally like, what he’s good at or anything that really enables you to create a deeper bond with him. More could certainly have been done in this area (or rather, simply anything) so that you relate better with Paul. 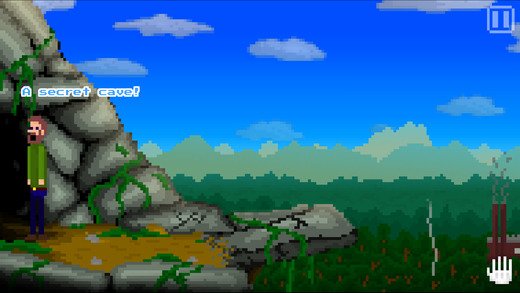 What stands out about Paul Pixel is its sense of humor, from sly nods to other games (like Mario in an abandoned petrol station’s dirty toilets) to references to our past and current times (like President Obama or a Baywatch babe that looks familiar) that make you smile, depicting a comedic touch throughout. This specific sense of humor gave me a good few chuckles and set the tone for the game itself.

In a pixel-filled environment, the backgrounds are nicely painted and characters can be recognized quickly. Although simple in design, the large pixels still clearly show what's going on. It’s a smart way of doing art as a small indie studio, making the most of each scene while not placing too much burden on the actual art creation. There are cutscenes on occasion, albeit quite short and to the point. In-game animations are extremely basic and could have been used a bit more, even for a game like this that shines due to its blatantly retro style. This was a bit of a letdown; if you’re depicting a certain era visually, you should at least meet the same standard that existed back then or ideally even complement it with some newer techniques.

Listening to the music as the introduction scene is playing, you’ll immediately notice the classic Commodore 64 SID sounds. They are modernized but still give you that strong nostalgic sense that goes very well with the aesthetic. The main theme was composed by the Pixel Lovers Orchestra and sets the stage for the type of music you’ll experience throughout the game, filled with the kinds of chiptunes you may remember from ‘back in the day.' 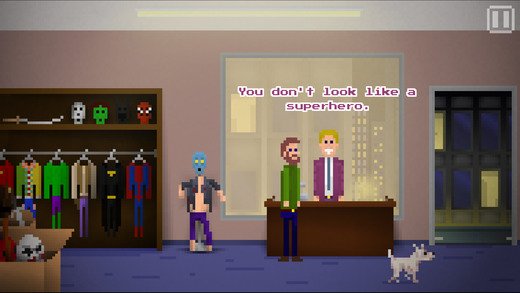 The action is accompanied by sound effects that at times feel off-balance, with varying volume levels that take you from the atmosphere that is so excellently established by the music. From a car scene early on in which there’s a jarringly loud engine sound, to other noises that can be quite basic, they are not bad but not great either. They feel bolted in, unlike the score that enriches your experience of the game itself.

You won’t find any voice acting here, which with the overall look and feel suits the game well. The font used for the dialog text is reasonably legible and supports the pixel art style. A main frustration with the text is that it’s non-skippable (or I’ve been unable to figure out how to do so); nor can you increase the speed at which the lines themselves disappear and move on to the next bit of text. If you click on a character again, either impatiently by accident or intentionally to see if they have anything new to say, you are forced to read the entire conversation once again, even if you’ve just gone through it moments before. This frequently happened with me.

The game explains some of the fundamental interactions as you start off playing Paul in his living room. Like most adventure games, you use the mouse to point-and-click on objects (or touch with your finger, if playing on iOS). The game only shows you in the beginning what you can interact with; later on it returns to the old-school guesswork approach of clicking on items to see if you can pick up or interact with them. There is an inventory that has vast space in it; you shouldn’t be surprised to fit half a boat in there! Although there’s no way to combine items you’ve acquired, a distinct difference from most adventure games is that Paul will actually hold an item as you take it out of your inventory, before using it in the environment. 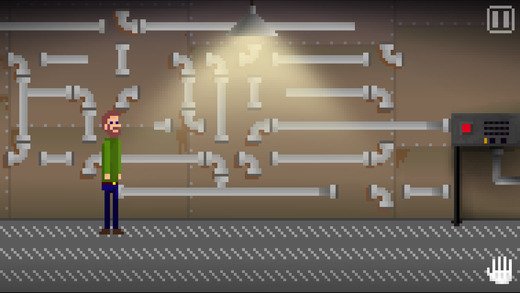 Any adventure gamer will grasp the gameplay within a few clicks and easily get into a story that is humorous and original, albeit incredibly short and over way too soon. This is due to a few different factors, the most important of which, unfortunately, is that none of the inventory-based puzzles are very difficult to figure out and are often boringly straightforward. I’d describe Paul Pixel more like an interactive story, just with added freedom to interact with hotspots. This isn’t an open world to explore by any means, as you’ll progress through the game scene-by-scene. Each location has specific actions you have to perform and might consist of a few different rooms to complete them in before you can go to the next. In general, you won’t return anywhere after finishing there, except for the hospital.

Despite its unapologetically retro design, Paul Pixel: The Awakening is an adventure game that would be best for gamers new to the genre who want a short and comical game that's incredibly easy to get into. It’s a snack-content type of game that better suits the iOS platform with casual gamers playing periodically for short amounts of time, perhaps even on the go. For the experienced adventure gamer, like myself, looking to spend more than two hours on a quest which has a compelling story with interesting puzzles, this really isn’t the one.

If you enjoy retro sounds and graphics, Paul Pixel may be worth the amusement it provides in its very brief play time, but you’ll need to accept a lack of any depth in both story and gameplay.

GAME INFO Paul Pixel: The Awakening is an adventure game by Xoron released in 2016 for iPad, iPhone and Mac. It has a Stylized art style, presented in 2D or 2.5D and is played in a Third-Person perspective.

What our readers think of Paul Pixel: The Awakening