While the uneven Devil’s Daughter doesn’t reach the heights of previous games in the series, there is enough here to warrant a playthrough and fans can safely add this to their expanding collection of the super sleuth’s adventures.

Readers rate this game as Decent.

Average based on 5 ratings

The eighth installment starring the Great Detective from Frogwares.

See all games in the Sherlock Holmes mysteries series

Adventure Games DB
Advertisement
It will take you about 2 minutes to read this review.

When Sir Arthur Conan Doyle first introduced Sherlock Holmes to the world in the late 1800s, I doubt he could have foreseen the immense longevity of his creation. The fictional master sleuth and his faithful companion Dr. John Watson have been solving crimes for well over a century now through a multitude of mediums, and they show no signs of slowing down. It was inevitable that the duo would make the move into video games, and for years now they have run the gamut of play styles, from the early INFOCOM text adventures to FMV point-and-clicks through to the latest 3D graphic adventures.

Frogwares have been releasing Sherlock Holmes adventures since 2002 and their latest offering, The Devil’s Daughter, spins a strange tale featuring liberal doses of murder, mystery, madness and the dark arts. Despite dealing with separate cases, the story rockets along and feels slightly more cohesive than the previous game, Crimes & Punishments, so fans of the series and those who love a good mystery in general will appreciate the narrative. However, your enjoyment of the gameplay this time will depend on your tolerance for faster-paced action sequences and an overabundance of minigames and Quick Time Events.

The story presents us with Sherlock solving five distinct cases and confronting deep personal issues. Although the investigations themselves are largely unrelated, there’s an ongoing narrative involving the arrival of Sherlock’s young adopted daughter. The presence of a mysterious clairvoyant neighbour who takes an interest in her initially at first only annoys the great detective, but eventually draws him down the path of suspicion and paranoia. As you progress through each crime, the overall story arc is slowly revealed and as the tension increases, you'll be desperate to find out what ultimately happens in the finale. 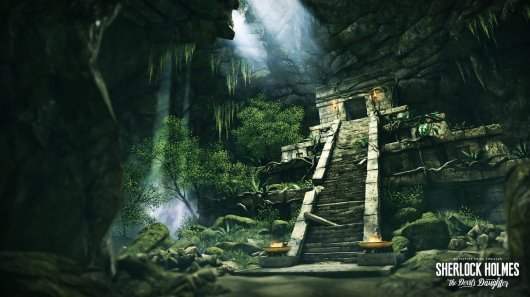 The five cases presented are varied and interesting. Controlling Sherlock and sometimes Watson, Wiggins of the Baker Street Irregulars and Toby the faithful canine, you'll look into missing persons, murders and abductions. In doing so, you'll need to figure out how a horrific accident between multiple carriages occurred, disarm explosives and conduct a rather humorous "exorcism", all in the name of evidence gathering.

There is quite a thrilling set piece in the first case where you must try to evade a hunter; even the minigame required to hide and escape traps couldn't derail the tension and excitement throughout the scene. One confusing turn is when Sherlock takes a sojourn into a Mayan Temple, which is filled with puzzles that feel like they were left over from a Tomb Raider game circa 1998. It's tedious, makes very little sense, doesn't really help the narrative, and just isn't all that fun to play.

While it is an interesting story that could have stood on its own, Frogwares made the unusual choice of completely redesigning the two lead characters whilst maintaining story continuity with previous games. In addition to the voice actors changing, this is a brand new, slightly more modern Sherlock and Watson. The two men look younger: Holmes now sports a full head of hair and looks more dashing than his previous incarnations, and Watson has gone from a bowler-wearing older gentleman to a younger chap who wouldn't look out of place in a Peaky Blinders episode. 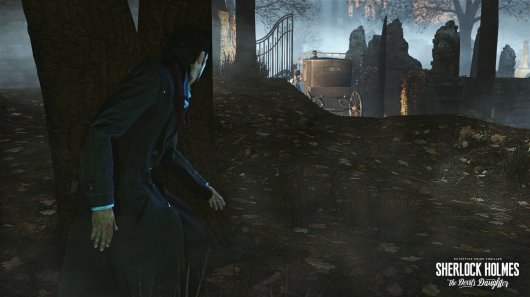 This would all be fine if The Devil’s Daughter were a total reboot or prequel. It's not the first time Sherlock has seen a retooling or different take on the lore; the characters wouldn't have stayed relevant if they'd never gone through changes over the years. However, other characters such as Inspector Lestrade and Mrs. Hudson look pretty much the same, while Wiggins has inexplicably stayed the same age, and Toby the canine is as old as ever.

Adding to the strangeness is that the game paints itself as a sequel. Plot points from previous games are referenced, including a significant one relating to Sherlock’s daughter in The Testament Of Sherlock Holmes (in which Holmes and Watson are clearly middle-aged). So while The Devil’s Daughter takes place at least a few years after the conclusion of Testament, they have apparently discovered the fountain of youth and de-aged themselves considerably. It really doesn't make any sense that Frogwares would go this far in redesigning the two iconic characters while still attempting to maintain story continuity.

The voice acting is well done: everyone sounds like they're from London and there are no glaring accents or odd vocal deliveries. The script doesn't suffer from any translation errors either, so that's always a plus. The soundtrack was also a highlight for me, as the moody music that accompanies the deduction scenes really helped immerse me in the task at hand, and the bombastic orchestral score really pushed the intensity of the action sequences. 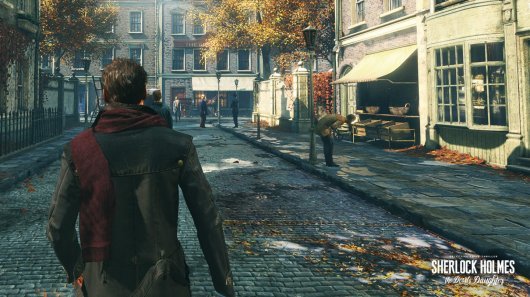 Gameplay is a bit of mixed bag, unfortunately. Essentially, if you have played Crimes & Punishments, you'll be right at home with the adventuring basics here. By using either a mouse and keyboard setup or gamepad, you set about in your choice of either first- or third-person partaking in the type of sleuthing that's par for the course in a Sherlock Holmes mystery, plus a few that are not. Standard activities include scouring scenes for clues, solving some very light inventory and logic-based puzzles, and interviewing people whilst examining them to glean details to confront them with.

While you do get to play as other characters in certain sections, there really isn't that much difference in their control set: Wiggins trails certain characters, Toby sniffs out suspects and Watson runs errands, essentially. The ability to switch perspectives on the fly continues to be a staple of the series and is always a welcome addition, as I personally know quite a few people who suffer from motion sickness whilst playing in first-person. 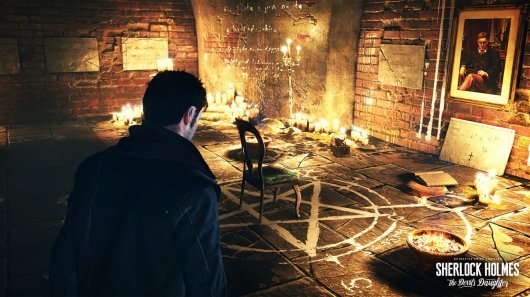 My favourite part was connecting all the deductions in Sherlock's mind to bring the case at hand to its conclusion. I found it an absolute joy to stitch bits and pieces of clues together to form a hypothesis of how each crime was committed and by whom. The satisfying feeling of seeing related words light up to form revelations became addictive, but would also cause me to second guess my hunches, as it is possible to come to an incorrect conclusion, leading to slight variations to the ending of each case. Whoever you end up accusing doesn't change the ultimate conclusion of the game, but it was still a tense kind of fun considering the implications of my choices throughout the five cases.

While the detective gameplay elements are serviceable and entertaining enough, the minigames and QTEs that are liberally used throughout are not up to the same standard. With the huge increase of these sequences from previous games, it seems as if Frogwares wanted to quicken the pace and pander to a more modern, action-orientated audience, but they didn't actually know how to incorporate it properly. The clunky additions are varied though: use your mouse and WASD controls to keep a cursor within a wavering circle to eavesdrop on some suspicious people, tap the right keys to win a bar fight, lawn bowl with poorly implemented physics, play what looks like a clunky Guitar Hero-styled sequence to forge a knife, and the list goes on.

You do have the option to skip any of these activities, but you'd be significantly reducing your overall play time, as it feels like for every major action there is some sort of minigame to complete. I would have preferred these events to be simply cutscenes, instead focusing more on sleuthing, puzzles and questioning suspects. While this approach more closely evokes the style of the Guy Ritchie films, the world of Sherlock Holmes has never struck me as a vehicle for action set pieces like these, especially when the previous games in the series haven't featured them to this extent. I personally hope these sequences are either toned down or eliminated completely in further releases. 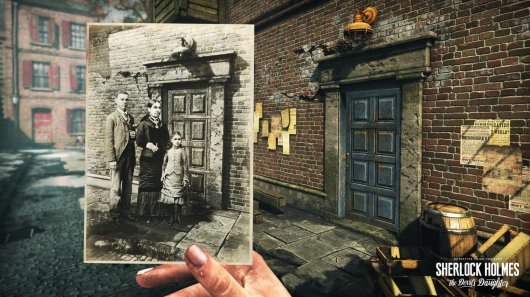 The Devil’s Daughter also features a sort of semi-open world, where you can leave 221B Baker Street to venture through the surrounding areas. There really isn't much to do apart from the odd quest or two early in the game before it's forgotten by the developers, and most likely by you too. It sure does look pretty, however, in gorgeous real-time 3D. Frogwares has been improving graphically with each release and this game is no exception. Victorian London drips with atmosphere; side alleys are grimy and dirty and hint at the possibility of dark secrets hidden within.

Other locations you visit with Sherlock and the gang are equally stunning, from dingy pubs to luxury mansions, spooky cemeteries, burning steamer boats, and yes, even the Mayan temple is pleasing to the eye. Seeing these settings on a 2k monitor is an absolute sight to behold. The characters are all well-designed too, moving naturally within the environment and featuring emotive faces, good lip synching and some pretty realistic looking hair... well, except maybe for Watson's weird facial hair.

The game ran without a hitch on my rig, and apart from the odd screen tearing, no glitches were to be found. The load times between scenes were a little bit longer than I would have expected, but they were masked by travelling sequences where you're given the opportunity to review evidence, so it wasn't a big deal at all. Since the game is quite graphics-heavy, I can't say for certain how it would perform on a computer with lower specs.

Ultimately, The Devil’s Daughter can be seen as a slight step back in the long-running series, especially since the last few games have been on a definite upward slant. It's uneven and features some strange design choices, both in its characters and gameplay, but overall it still manages to capture that wonderful Sherlock vibe. Frogwares obviously love the character and aren't afraid to experiment and try new things with the source material. The story admittedly won't set the world on fire, but it is fun and has enough mystery and intrigue to keep armchair sleuths playing throughout the 8-10 hour campaign until the satisfying conclusion. The minigames and ramped-up action may appeal more to twitch-based newcomers, but series fans shouldn't be too turned off by them, as the game will still satisfy those familiar Sherlock cravings in between. 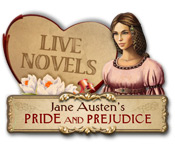 What our readers think of Sherlock Holmes: The Devil’s Daughter

The Devil's daughter is a stepdown from it's predecessor. I didn't like the heavy oriented action scenes as some of them were unpractical with a mouse/keyboard (balancing). The puzzles are great, some hard ones. The cases aren not that interesting nor are...
Read the review »

Action... and a little bit of adventure

From the start you know you're not going to have much control in this one. A strange woman has moved next door and is insinuating her way into the life of your adoptive daughter. Despite it being only 1894 and women only just now being able to smoke in...
Read the review » 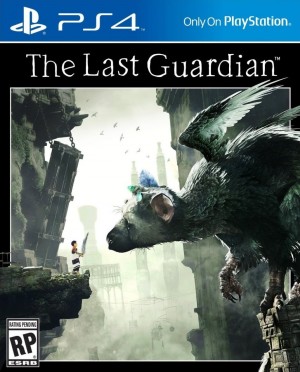 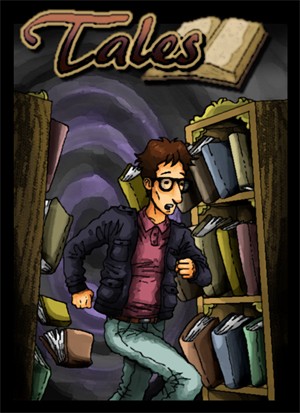