Monumental is such an anachronism, I assumed its appearance on my PC could only be explained by a temporal vortex that connected directly to the bargain bin section of a late ‘90s / early 2000s-era Electronics Boutique store. It channels an awkward adolescent phase of adventure games, where a post-Myst world was convinced that the future of the genre was wandering desolate landscapes solving obtuse puzzles, and the growing popularity of nascent 3D graphics meant that those previously pre-rendered landscapes were replaced with an assortment of unwieldy polygons. Eventually the genre learned how to deal with hormones and growing hair in funny places, but apparently Monumental didn’t see the after-school special and grew up to become the twenty-five-year-old who works at the Gas-n-Gulp and still goes to high-school parties wearing his letter jacket and makes everyone generally uncomfortable.

Almost everything about this game feels like a throwback to a bad Myst clone from back in The Day. Ancient civilization that mysteriously vanished? Check. Lone wanderer solving a series of inexplicably-placed puzzles for no apparent reason? Check. Okay, to be fair, there is a reason, but it’s just as flimsy as any other game of its ilk that has you roaming around solving puzzles inexplicably placed by an ancient and/or alien civilization.

In this case, you’re an astronaut or a space policeman or something to that effect, but you’re sent to some planet where a group of scientists mysteriously vanished while researching the ruins of an alien civilization that…wait for it…mysteriously vanished, but not before leaving a slew of cryptic puzzles in their wake. Because if the adventure genre has taught us anything, it’s that any sufficiently intelligent civilization (alien or otherwise) on the verge of collapse will immediately divert all of its resources to constructing a series of elaborate puzzles, presumably to entertain future tourists. Which is why, if you’ve ever visited the Yucatan, you can hardly make it through any of the Mayan ruins without having to stop and solve a slider. 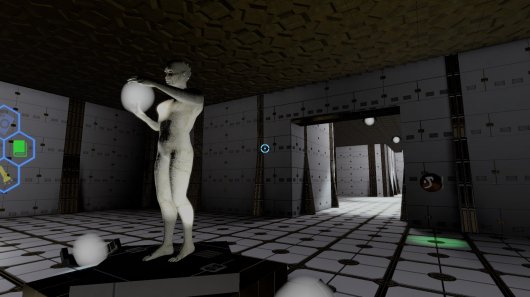 You can collect some journal entries scattered about if you’re hell-bent on trying to stitch together some kind of story, but it’s not really worth the effort. There’s no narrative redemption to be found, so whatever salvation there is lies in the strength of the puzzles. There are plenty of games with naff stories that I’ve given a pass because of the puzzles. Most of Monumental’s challenges can be distilled into two types: alien glyphs and audio puzzles. The only “trick” to solving the majority of the glyph puzzles is to simply find the glyphs’ translations, which are randomly scattered throughout the game. The audio puzzles are the typical game of “Simon says” where you hear a series of random notes and then have to reproduce them in the same sequence using some alien contraption. Neither of these types of puzzles are particularly compelling or interesting.

And just to make sure that all of the adventure game clichés are adequately represented, there’s a maze, of course. I’ve previously discussed, at length, my complete disdain for mazes in adventure games. I won’t go into detail here, but suffice to say, I was annoyed in principle at its existence. In fairness, it isn’t a particularly difficult maze. It isn’t good either, but I tolerated it and didn’t actively dislike it. But then the game forced me to backtrack through the maze, and I was condemned to traverse it no less than three times, and my tolerance soon turned to frothing rage and thus the circle was complete.

There are roughly three legs a game can solidly stand on, and if story and gameplay are a bit wobbly, it’s possible for a game to balance precariously on that third leg if it looks good enough. I’ll give a reasonable amount of leeway to games that are visually striking if all else fails. And I’m not a graphics snob; I don’t need tessellation or fancy hair physics or other buzzwords that I probably don’t understand. A lot of small-time indie games I’ve played in the past few years have managed to look fairly impressive. Which is why it’s puzzling that Monumental looks like it was created around the same time that Sierra gave us a 3D-rendered game in which the greatest danger was the possibility of impaling characters on Gabriel Knight’s spiky coif. I’m exaggerating, but not by as much as you would think. The environments are primarily a collection of drab-colored corridors and blocky fixtures. It’s not that the graphics are “bad”, but they’re generally simple and generic to the point that when I try to picture them in my head, I keep seeing a Quake 2 map. 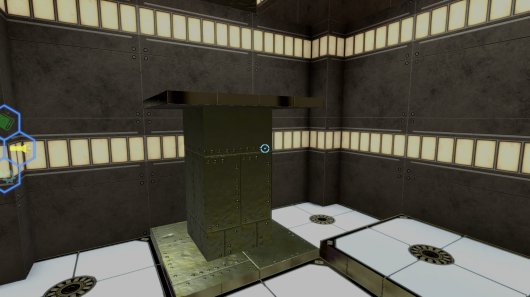 But more than that, some of the design choices are just deliberately odd and add to the feeling that this game was actually designed 15 years ago, give or take, when 3D games were still something of a novelty. It uses the familiar first-person perspective, but when you move, the head-bob (at least I assume it’s supposed to be a head-bob) is so insanely pronounced, I assumed my character either had a severe limp or one leg was several inches shorter than the other. Combine that with the rather large elliptical cursor in the center of the screen that’s constantly rotating for no apparent reason whatsoever, and I spent the first 15 minutes of the game fighting off a migraine.

While the movement is standard first-person stuff, the interface in general is a bit odd. You don’t have an inventory, but you’ve got a number of tools to use (including a flashlight, notebook, etc.), which are all controlled with a combination of various left-clicks, right-clicks, mouse wheel and middle-clicks. It’s perfectly functional, but it’s not very intuitive, so it takes a while to get the hang of it. I would have preferred mapping or re-mapping some of these functions (to either keyboard or mouse), but the game has precious few customization options, so it was having none of that. 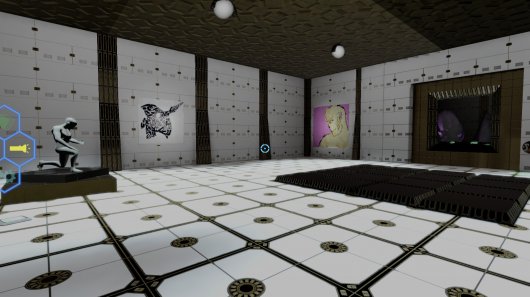 Of course, for all of my bitching, I’ll be the first to give credit where it’s due, and Monumental includes both a camera and audio recorder in your toolbox, letting you take pictures and record audio clips at any point. I could have made do without the camera, but given the number of audio puzzles in the game, I would have likely gone into a murderous rage without the recorder. More importantly, the interface is set up in such a way that you can view your pictures and play back audio clips while you’re working on a puzzle. This is a fantastic thing and more developers should latch onto these concepts. Unfortunately, the game screws this up a bit by not giving you the ability to at least delete or edit your pictures or recordings, so if you’ve accidently snapped useless pictures (which is fairly easy to do), you’re stuck having to scroll past them for the rest of the game. Two steps forward, one step back.

Much like the graphics, the soundscape is rather sparse. There’s minimal voice acting, which is probably for the best, and the sound is otherwise adequate, meaning that I don’t really remember it. Similarly, the background music is fine, which is to say it didn’t particularly inspire me, but it certainly didn’t bother me. But more tellingly, I was having some strange issues with the game volume, where the music would become inexplicably muted in the settings on occasion, and so I ended up playing significant chunks of the game without the background music and I hardly ever noticed.

That is the least of my complaints so far as technical gremlins. For reasons that I can’t possibly begin to fathom, the game takes an incredibly, stupendously long time to load, and even though I’m given to hyperbole at times, this is not one of those times. On the one occasion when I was feeling rather sanguine about the whole affair, I literally timed the loading screen at just over two minutes, and I would say that tended to be around the average. On other occasions, I either ctrl-alt-deleted my way out of the game in a fit of frustration or quietly contemplated my life’s decisions, which I tended to be rather okay with up until the point where I decided to load the game. 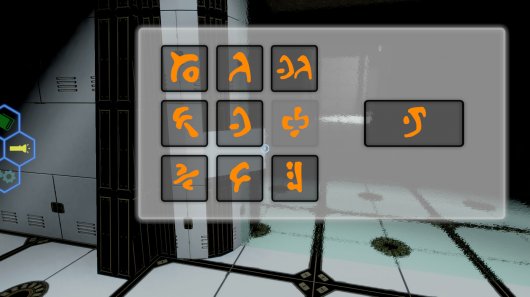 There are very few instances where I’ve abandoned a game altogether, especially one that I’m supposed to be reviewing. I had more than one crisis of faith during my play-through of Monumental, but I persevered even though I couldn’t help feeling that this game was deliberately trying to stick it to me. It’s fitting, then, that the final Steam achievement I unlocked was called “Dunce Cap”, which I earned per the following: “Use way more hints than you should in order to complete the game.”

Yes, Monumental has an in-game hint system. I’ve probably played better than a hundred, if not hundreds, of adventure games in my life, and I’ve always prided myself on not taking any hints unless I was stuck beyond any hope, and thankfully that hasn’t happened very often. On a few occasions during this game, I used the hint system because I was stuck beyond any hope; after taking those hints, in retrospect, I have absolutely no idea how the hell I was supposed to possibly divine the solution aside from dumb luck or clairvoyance.

At some point during the game, I started reading all of the hints, not because I felt I needed them, but because by then I just didn’t want to leave anything to chance. (Hints or no, the game probably shouldn’t take more than 3 hours to finish, although there’s an achievement for finishing in under 45 minutes, so interpret that as you will.) So because of that, in the closing scene my character was wearing a literal dunce cap, which is oddly fitting since I probably haven’t seen that reference since the ‘90s, either. At the end of the day, I saved an alien civilization from extinction and they mocked me for it. I didn’t really want to, though. If there had been an option to flush their frozen carcasses into the nether-regions of space, I would have done that instead.

Monumental feels like an homage to the heyday of bad Myst clones that no one should be particularly nostalgic for.

GAME INFO Monumental is an adventure game by Whipstitch Games released in 2016 for PC. It has a Illustrated realism style, presented in Realtime 3D and is played in a First-Person perspective.

What our readers think of Monumental