Based on a painfully true story, this is a game in which the young hero has cancer, a child named Joel Green. Most video game heroes are not this young or this defenseless. Usually they show off their quick reflexes, dexterity or puzzle-solving abilities. Often they die and then come back to life over and over again. At one point Joel does get his chance to don armor and fight his dragon face-to-face, but this sequence – like many other passages in That Dragon, Cancer – is played out allegorically in a vivid, surreal landscape. The death that Joel actually faces is gut-wrenchingly specific and entirely fatal, and it’s a battle that is sure to impact any player on a deep emotional level. Yet the story of Joel’s life is not one of purely hopeless despair, drawing on universal themes of innocence, fear, faith, and love as well.

The background of this game is as harrowing as it sounds: the real Joel Green was diagnosed with a brain tumor as an infant and wasn’t expected to live much beyond the age of two. Yet Joel’s fighting spirit, plus his family and doctor’s care through grueling surgical, transfusion, and radiation treatments helped him fend off this “dragon” far beyond all expectations. Spearheaded by Joel’s parents, Ryan Green as lead designer and Amy Green as writer, this game is both a tribute to Joel’s courage and a thoughtful, soul-searching journey through one family’s traumatic ordeal.

That Dragon, Cancer begins in a park with giant trees, rock formations and a duck pond. Joel kneels at water’s edge, the patter of his siblings and parents in the background. He is luring a duck closer by throwing bread in the water. You control the duck, swimming to Joel by following the path of bread crumbs. The graphics consist of 3D stylized shapes and vast swaths of luminous color, finely textured. The trees billow slightly, evoking a gentle breeze. Joel is stocky and his face is abstract, without eyes, mouth or nose. One of his siblings asks why, if Joel is almost five, he still can’t talk. Their father explains that Joel’s speech is delayed – his sibling concludes the delay is due to “you know.” 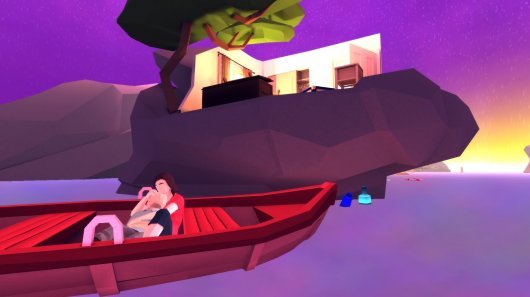 As an unidentified first-person onlooker, you stroll around the park, accompanied by gentle piano and string music. In one spot you see a black, angular tree. It’s clearly out of place here. But the whole landscape is so soothing that it’s easy to pass it by. Now and again, voices whisper or ask questions. 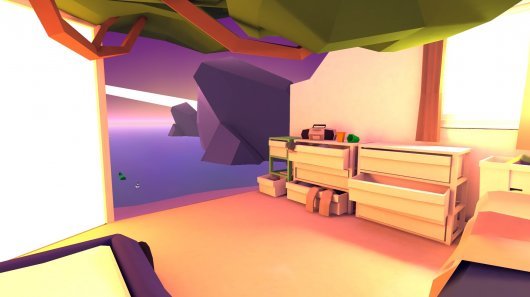 “…no one ever realizes how short the time is.”

Further into the park you reach a playground. Birds are chirping, the sun is shining, and Joel is laughing as you push him on the swing. It’s like a scene from a lyrical poem, tinged with grace. But there’s another black, spiky tree in the background. This one is larger. And more dark brambles emerge from a nearby stream.

The game then reveals a series of roughly chronological flashbacks, some set in hospital corridors, others in a dreamlike setting representing the fallout from Joel’s illness. Rooms without roofs, sliced into disjointed sections, and other disrupted scenes from “normal” life are strewn about a purple lake, a place where you can (literally) sink or swim. You will also venture into a starry expanse with dancing constellations and visit a temple with scaffolding, high-tech screens, and nubby, filtered light. 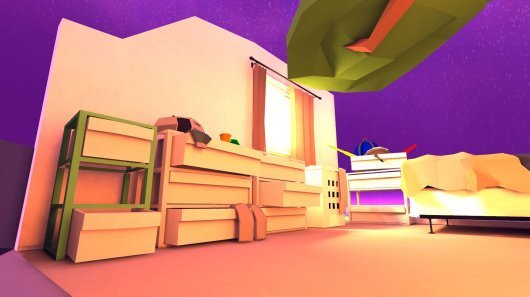 One of the most potent uses of surreal imagery takes place in a conference room. Joel sits on a sofa, playing with a Farmer Bill See ‘n Say toy (“The horse says neigh.” “The cow says moo.”). As Joel giggles over the toy, its responses become more eccentric: “Farmer Bill rides the cows to the store for milk.” “It’s the horse’s birthday. Farmer Bill makes a carrot cake.” “Farmer Bill plays Go Fish with the ducks. The ducks always win.” Joel’s parents are there and the doctors have closed the door (never a good sign) to talk about test results.

The doctors matter-of-factly begin the horrific diagnosis. The See ’n Say device transforms so that its animals are replaced by the people in the room, and manipulating the toy gives voice to their hidden thoughts. Disbelief and anguish wash over Joel’s parents. Suddenly, the orange carpet turns gray and is drenched in waves of water. The participants sit, statue-like as rain falls and lightning flashes. The diagnosis repeats, the words echoing oddly. The doctors begin shouting over the downpour and the thunder. Finally, the entire room disappears in a massive deluge.

This succinct scene packs a heartrending punch. In a few short minutes via an unorthodox presentation, I caught a glimpse into everyone’s soul – except for Joel’s, whose main vocal contribution is laughter. Since he can’t understand what’s happening, he can’t react to it. He can only ride the waves of emotion without a clue as to their source or meaning. 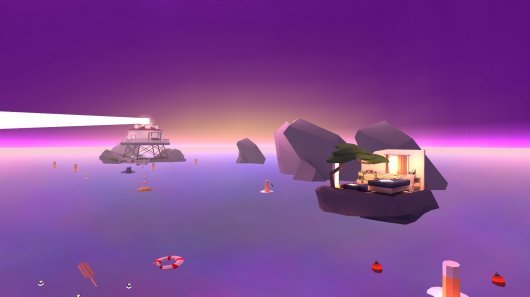 Like Joel, the other characters in this game have blocky faces – though unlike Joel their features are more distinct, displaying hair and eyebrows. Voice-overs are effective, most of them provided by Joel’s family. The siblings in particular give a surprisingly natural performance. The result is that you, as an observer, are snooping into brief domestic interactions. Though there are sequences when a character – particularly Joel’s father – feels powerless and alone, there is also the sense of a larger community. One scene in the pediatric cancer ward reveals a slew of colorful cards with messages from family and friends, as well as the gaming and Kickstarter communities (the latter having helped to finance this game). Another, darker scene has an ambient layer of voices praying fervently for Joel to be healed. Doctors appear and disappear, delivering help, causing confusion, and sometimes issuing glib statements, such as: “We’re very good at managing the pain.”

The Green family’s Christian faith is woven into the storyline as they wrestle with questions to which there aren’t obvious answers. One parent is certain that God will produce a miraculous cure. The other isn’t convinced that the crisis will be so easily resolved. One parent wants to get on with things and keep life as ordinary as possible, while the other wrestles with every possible aspect of what’s happening to Joel, the result of which is desolation full of aching loneliness. Joel’s siblings try to understand what’s happening to him; they are fearful of the consequences and eager to be reassured despite the evidence of their own eyes and ears.

That Dragon, Cancer does not contain puzzles, but it does have lots of interactivity throughout its two hours of gameplay. You use 360-degree panning to view the environments via mouse movement and clicking on hotspots triggers cell phone messages or opens close-up views of objects. Occasionally the hotspots are hard to find, so you’ll have to search around before progressing. Some sections require you to make Joel laugh, evade prickly organisms or gain information. Messages in bottles and cards are sometimes scattered about, but reading these is mostly optional. A few of the challenges are mildly timed, like a wagon race and the arcade video game in which Joel is a knight taking on a fire-breathing dragon (this game-within-a-game requires the use of the keyboard). All the activities tie into the story as metaphors for Joel’s progress or physical decline, as well as what those around him are thinking and feeling.

The game auto-saves only, but once you have completed a sequence, the “Scene Selection” feature allows you to return and replay at will. I gulped down this game in several short drinks. It was easier to experience one segment at a time because that allowed me to think about events and character reactions, and to process my own emotional response. I was surprised that, though it touches on the depths of mortal distress, I did not find the story manipulative or cloying. The scenarios are often rapt and dreamlike, and much (though not all) of the suffering is left up to the player’s imagination. It’s typical of how deft the storytelling is that, after immersing me in sorrow and concern, the ending made me chuckle.

GAME INFO That Dragon, Cancer is an adventure game by Numinous Games released in 2016 for iPad, iPhone, Mac and PC. It has a Stylized art style, presented in Slideshow and is played in a First-Person perspective. You can download That Dragon, Cancer from: We get a small commission from any game you buy through these links.

What our readers think of That Dragon, Cancer