Frank Sinatra isn’t the only one who’s had a few regrets, but unlike ol’ Blue Eyes, who made peace with a life spent doing things his way, you’ll have a much more difficult time reliving your sins as the protagonist of Distraint. A bite-sized, side-scrolling psychological horror adventure created in just three months by indie Finnish developer Jesse Makkonen, Distraint sees players perform three soulless deeds and suffer the consequences that result, with no way to alter the course of events recounted in flashback. The game slides a little too indulgently between the real and surreal, and it only superficially delves its rich themes of greed and guilt, but the modest presentation evokes an effectively creepy atmosphere throughout, while the light puzzling provides just enough substance to carry it through to its dramatic conclusion.

In this “story of regrets” starring a young man named Price, you control a lowly representative of the money-grubbing corporation of McDade, Bruton & Moore. Three different residents around town are no longer able to pay their housing bills, and it’s your task to slap a distraint on the properties, forcing the tenants out of their decrepit homes by month’s end. The first is a kindly old woman with a permanent smile on her face but no place to go, who so sweetly forgives your role in her cruel fate that it’s sure to tear at anyone’s conscience. Sure enough, you’ll immediately start second-guessing your involvement in such a heartless deed, but your bosses will brook no weakness, and promises of promotions and riches spur you to keep going. 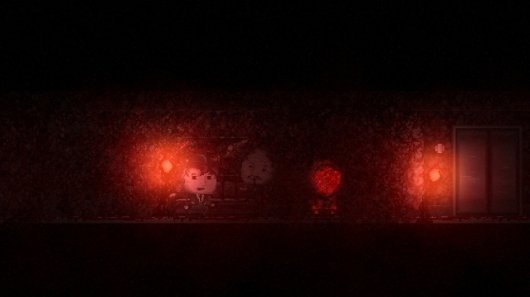 Price’s remaining two business quests, plus some nightmare scenarios and real-world attempts at penance (or at least self-consolation), take him through such settings as a forest and sprawling log cabin within, an old age home that disposes of former residents the cheapest way possible, a ritzy office building, and a rain-drenched cemetery, but these are no ordinary locations. The more Price wrestles with the results of his actions, the looser his grip on reality, leading to any number of hallucinatory effects: ghosts appear with paternal concern, nurses with bleeding eyes attend to elderly retirees, blood flows down walls, and a food grinder churns disgusting remains in a darkened basement, to name just a few of the disturbing scenes you’ll encounter. There are some decidedly gory moments, but Distraint rarely, if ever, relies on cheap jump scares, opting instead for slow-burning horror to elicit an ever-present sense of unease and dread in a pursuit that’s doomed to go horribly wrong.

These scenarios are displayed in a simplistic pixel art style that fills barely the horizontal middle half of the screen, the borders around it permanently engulfed in darkness. In fact, much of the viewable area often is, too, illuminated only by the barest of light sources or the inexhaustible lantern you carry with its limited glow radius around you. It’s kind of a cheap trick to conceal the simplicity of the environments, but it works remarkably well. There isn’t much ambient animation in the game, but the lighting ensures a constant supply of dust particles floating about. Often a new area is tinged slightly in another colour, whether purple, red, green, or grey, and the art has a surreal, almost unearthly feel. This is especially true of the characters, who have tiny bodies and bulbous heads. When Price moves he shuffles sideways, ever facing the player, his little legs bobbing about and his hat bouncing slightly on his head. It’s akin to watching a really eerie puppet show in the dark.

The music contributes greatly to the changing moods as well, ranging from ominous tonal, industrial backdrops to more upbeat, almost jaunty tunes when appropriate, and even a blues piece played by a band you recruit for a party. Silence is used just as effectively in between, giving way only to background sound effects of traffic, birds, creaky faucets, and steady drizzle on an umbrella overhead. 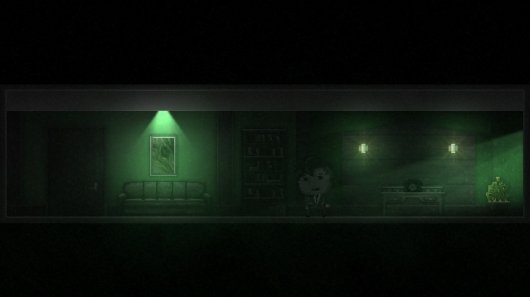 Each location consists of long hallways or outdoor passages that are easily navigated using the keyboard or gamepad. When standing in front of a door or interactive object, a marker will appear to let you know that a prescribed action is possible. When carrying an inventory item, Price will attempt to use that instead, which sounds fine in theory but is needlessly cumbersome in practice. The inventory holds only three items at most, and to activate one you must call up the inventory and cycle through the three slots (even the empty ones) until reaching the object you need. That doesn’t sound so bad, but in order to deactivate it so you can interact regularly with the environment again, you must go through the same ritual, this time choosing a blank slot instead. It’s certainly not a big deal, just a small nuisance throughout. Other minor nitpicks include the game occasionally throwing up invisible barriers to prevent you from wandering too far off course, and not making it more apparent which dead-end “walls” are really doors to exit from the side.

Given the relative dearth of inventory items at any given time, you’d be correct in assuming that the puzzles in Distraint are not particularly complex. Each location has its own distinct objects to collect and use, so the materials you need are never too far away. Nor are there very many hotspots to try using them on, further reducing the possible challenge. Still, there’s a little thought required in order to progress, particularly later in the game when the objectives ramp up as you seek to cause distractions, track a stinky skunk-scented dog, and restore power on multiple occasions (neither, oddly, ever casting more light on the subject when achieved). You’ll also prove yourself the world’s most dubious cook at times, acquiring stomach-turning ingredients in order to proceed. One sequence, although maybe not a “puzzle” per se, involves a clever use of environmental layering as you make your way through a crowd of imaginary people to reach your target.

The only moderately difficult task involves both a bit of strategizing and a degree of rapid movement. At one point, for reasons never fully explained, you encounter a smoky green substance that alters the environment into a distorted version of itself for a very brief time. This not only looks a bit psychedelic, the screen zooming and wavering around you as a cacophony of noise and a rapidly depleting line gauge urge you to hustle, it also reveals hidden doors where none existed before, and blocks pathways previously accessible to you. Since you have so little time until your senses return to normal, you’ll need to hightail it to your destination or another smoke emitter to restore your allotted time and get back on the move. This requires some trial-and-error to work out the proper sequences, which wouldn’t have been so bad except this particular location is so labyrinthine that it takes some multiple-reality meandering just to get back where you started if you fail (and you will) the first few times. 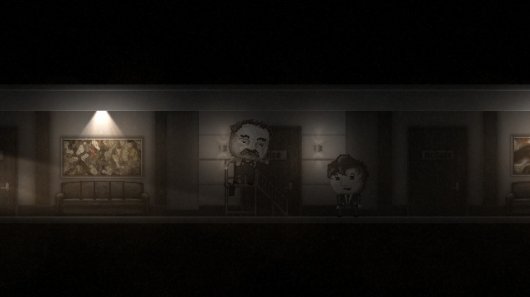 You’ll sometimes need to search for environmental clues to help you along the way, and there are a couple other timing-based tasks. One of these can actually result in death, but this is more a tension-creating moment than a test of reflexes. Rest assured, you’ll know it when you reach it, and there won’t be any “fight or flight” dilemma. The only option is to run like hell (or at least, move as fast as Price’s scrawny little limbs can move him). If you do die, you’ll know exactly what to do when the scenario starts again right away. It’s a good thing that death is so rare, because Distraint goes old-school with its save system, requiring you to manually save at predetermined points scattered throughout the levels.

In between the puzzles, there’s little more to do in Distraint than to thoroughly explore and talk to the occasional other character along the way. Conversations are non-interactive, so you’ll simply click through the scripted dialogue, briefly touching on Price’s feelings of remorse for causing people’s suffering, but rarely delving any deeper than that (and never stopping him from shamelessly committing even more immoral acts upon others). The game is unvoiced, but each character has their own text colour, and subtitles scroll out with a distinctive trill. Perhaps it’s just as well that there are no spoken words given the localization errors in the text. There’s nothing too serious, just minor grammatical issues to serve as a constant reminder of a flawed translation.

At less than three hours all told, Distraint is certainly not the longest of games, nor the deepest, but it clearly wasn’t meant to be. For psychological horror fans looking for something a little different, this side-scrolling adventure will provide a lightweight, but not at all lighthearted, look at one man’s descent into self-destructive madness, reminding us that the deepest-rooted horrors are those we inflict on ourselves. The gameplay won’t wow you, but the developer has managed his obvious budget restrictions cleverly, from the simplistic but surreal graphics steeped in perpetual darkness to the fairly streamlined quests that keep the action moving at a brisk pace. Ultimately, the real star here is the game’s atmosphere, which is unapologetically grim and foreboding, with just enough rays of hope to brighten the way from beginning to karmic end.

A modest but oddly compelling adventure steeped in perpetual darkness, the surreal side-scrolling Distraint is a low-cost exploration of the high price of selling one’s soul.

GAME INFO Distraint is an adventure game by Jesse Makkonen released in 2015 for Android, PC, PlayStation 4, PlayStation Vita, Switch and Xbox One. It has a Stylized art style, presented in 2D or 2.5D and is played in a Third-Person perspective. You can download Distraint from: We get a small commission from any game you buy through these links.
The Good:
The Bad:
The Good:
The Bad:

What our readers think of Distraint