Present day, somewhere in the Pacific Northwest. At 8pm on a Friday night, five teenagers arrive on the military base-turned-tourist attraction Edwards Island to hang out, drink, and go ghost hunting. They might not survive the night.

Chances are you’ve seen a horror movie with a setup like this, but you’ve never played a game like Oxenfree, the debut from Night School Studios. Let’s get this out of the way up front: Oxenfree is a story-focused, dialogue-heavy game with next-to-no puzzle-solving. If you’re looking for a traditional adventure game, look elsewhere. At the same time, it’s not a Telltale-style interactive drama (despite some of its team having previously worked there). Most of the 4-5 hour experience is spent exploring, conversing, and listening. A story does unfold, but it’s more like you’re living through it than directing the action, thanks to the game’s fluid dialogue system.

You play as a blue-haired girl named Alex and are almost always accompanied by one or more of her companions: her dorky best friend Ren, her nice guy stepbrother Jonas, the quiet girl Nona, and the queen bitch Clarissa. They’re easily stereotyped, but each of these characters has more going on than appears on the surface—you just might need multiple playthroughs to plumb their depths. 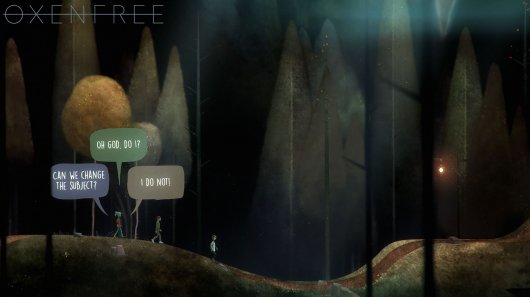 The third-person perspective is zoomed out, with the characters relatively small on the screen so you get a good sense of the area around them. I liked this aesthetic and only minded the lack of dynamic cameras and close-ups during a few “Do you see what I see?” type conversations where I didn’t know what I was supposed to be looking at. On PC you can play with a gamepad or the WASD and arrow keys (plus the mouse to select dialogue options), with navigation reminiscent of a side-scrolling platformer. Most movement occurs to the right, left, up, or down, but Oxenfree does have some depth with the ability to walk “into” or “away from” the screen. Compared to a platformer, however, Oxenfree’s navigation is low-key, with climbing a rock or jumping a gap as simple as pressing a button or key.

The creepy-island-at-night setting would be wasted if the group stayed on the beach drinking all evening, so of course they split up early. (Much like in a horror movie, yelling “Don’t go down there alone!” at the screen has little impact.) Thankfully Alex is rarely totally alone—she usually has at least one companion, with the non-playable character(s) following and chatting away like teenagers do. Alex can join in, with dialogue options giving you a choice of how to play her (friendly, bitchy, etc.). If you don’t respond quickly enough (or simply choose not to) she’ll stay silent, which can also have ramifications.

Oxenfree’s meandering conversations reminded me of Richard Linklater movies like Dazed and Confused: the dialogue is quick, entertaining, and authentic (at least to my 37-year-old ears). It’s a big step up from the dialogue in that other recent young adult game, Life Is Strange, which frequently tried too hard to sound young. One of the game’s strongest elements, Oxenfree’s script is natural and often funny, but it also takes surprising turns when the prattle turns to issues of consequence, such as recent deaths in the family that Alex and Jonas are coping with. Voice acting is consistently good, bolstered by writing and audio design that have conversations overlapping, trailing off, and suffering awkward pauses. Even the interface for conversations is fun and unassuming, with Alex’s dialogue options appearing as talk bubbles overhead that gradually fade away if you take too long to choose. 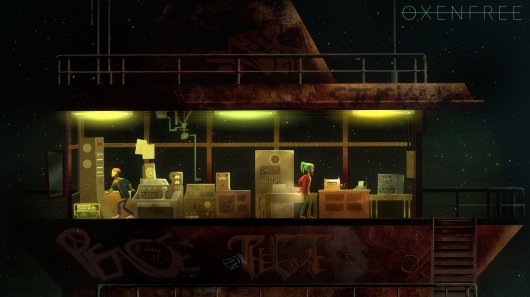 My only complaint about the running commentary is that it sometimes distracts from the present goal. I’d find myself pausing, waiting for a character to make their point, before I realized they were just making chit-chat while we traversed from one area to another. I guess I’m not used to conversation just happening in a game, without the usual “now let’s stop what we’re doing and pivot to face each other while a dialogue tree fills up the bottom half of the screen” pretense. But overall I loved the dialogue—just as well in a game that’s mostly dialogue! If you’ve ever stood in line at Starbucks about fifteen minutes after high school let out, you’ve heard these conversations firsthand. Oxenfree is the only game I’ve played that recreates them so well.

But do you want to play a game about kids hanging around in Starbucks? Probably not, so it’s a good thing Oxenfree has a scary story at its core. Formerly a military base and now home to a museum that honors the lives lost on a submarine sunk during World War II, Edwards Island has become a legendary hangout for teens looking to party and connect with the dead. For this purpose, Alex and company have brought along a hand-held radio—you can pull it up at any time and rotate the dial to try to find a signal. In certain marked locations you can tune into a guided tour that provides historical background and context for the island’s landmarks. Tuning to other channels offers up clues that enhance the suspense and may relate to the central mystery. 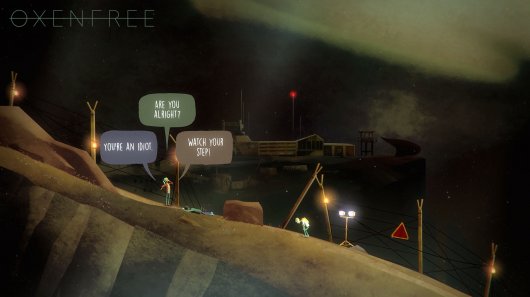 Using the radio—deciding when to take it out, then tuning to the correct station—is the closest Oxenfree comes to puzzle-solving, but that’s not saying a whole lot since all you really need to do is turn the dial until the gamepad starts to shake or on-screen cues indicate you’ve hit the right channel. I liked this from a pacing standpoint—the story keeps moving, with few stop-you-in-your-tracks obstacles—but there’s no challenge here. I have a feeling I missed many radio-related clues on my first playthrough; you may understand the backstory better if you take more time to play around with it.

Considering the teens came to the island hoping to wake the dead, it’s not a big surprise when strange things start to happen. What did surprise me was how truly scary Oxenfree can be, in spite of its cartoony aesthetic and fun writing. The supernatural goings-on relate to radio signals and frequencies, a theme well supported visually and aurally. At moments of extreme weirdness the screen goes staticky, as if reality itself has been tuned out. As you scroll through the channels in any given location, a mix of old-timey music, spoken messages pieced together from disparate recordings, Morse code, and indecipherable voices make the hand-held radio more than a gameplay gimmick—it’s a vehicle for storytelling. I’ll admit I couldn’t always follow Oxenfree’s narrative, but even when I wasn’t sure what was going on, I was genuinely freaked out thanks to the powerful audio and visual effects.

But this is more than a ghost story. It’s a people story, and in the end I found what’s going on with the characters more interesting than the ghosts. To varying extents, each of the teens is dealing with a personal struggle, from divorce to death to the ache of young love. You can learn someone’s backstory by asking the right questions, and once you do you may have a deeper understanding of their behavior toward the others. Some late revelations will make you want to go back and replay the early parts differently. Alternate outcomes reflected in the game’s closing scene, overlaid with a pie chart that shows how your ending syncs up with other players’, will make you curious about what you could have done instead. I ended up sharing one ending condition with only 4% of other players—but I didn’t do it on purpose, or even realize the game was keeping track! This made me question how I’d chosen to direct Alex and I wanted to immediately replay so I could make different choices and experience the nuance that many other players saw the first time. 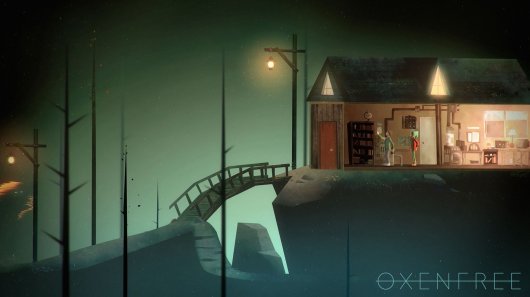 Sadly, a second playthrough was not to be. My first time through, Oxenfree crashed a few times but I was still easily able to finish. (My computer meets the minimum specs but it’s getting up there in years, so a few crashes to desktop are kind of par for the course.) Then an automatic game update happened through Steam. Ever since, numerous crashes have prevented me from progressing past an early scene, sometimes preventing the game from launching at all. I don’t know if the Steam update broke something that worked before or if my saved game is corrupted or what, but the takeaway is that a game I desperately want to play again and again until I’ve uncovered all its secrets—a game that invites and encourages this sort of replay—is now totally unplayable.

These crashes highlighted some other issues. Oxenfree has only one save slot, and you can’t save your game when you want to. Instead, the game auto-saves when you leave certain scenes… but not all scenes. So if the game crashes, or you regret a choice and want to backtrack, or you decide to quit midway through a lengthy sequence thinking the auto-save has your back, you’ll be forced to replay a portion. (There is an on-screen indicator when the game saves, but it can be easy to forget how long ago you last saw it.) Even if you never experience a hard crash, you might have to restart a scene if a navigation glitch causes your companion to get stuck somewhere and become unable to follow, as happened to me a few times.

Replaying a scene isn’t the end of the world, but it’s tedious because you can’t skip dialogue. Even if you choose to have Alex stand around and say nothing, the other characters’ conversation continues and you have to wait it out. In a game that’s virtually all dialogue, I can understand why the developers wouldn’t want people skipping it willy-nilly, but combined with the restrictive save game system it can make for a frustrating experience.

I finished my initial playthrough feeling very positive about the game and eager to pay Edwards Island another visit, but the technical difficulties I’ve experienced since then have unfortunately dampered my enthusiasm. Still, Oxenfree is a game I recommend for story fans, especially if you have a soft spot for teen drama. The larger story is at times hard to understand, but the superb writing, acting, audio, and visual effects more than counterbalance the occasional “wait, what just happened?” story gaps. It’s a game I would have loved to have played twice.

GAME INFO Oxenfree is an adventure game by Night School Studio released in 2016 for Android, iPad, iPhone, PC, Switch and Xbox One. It has a Stylized art style, presented in 2D or 2.5D and is played in a Third-Person perspective. You can download Oxenfree from: We get a small commission from any game you buy through these links.

What our readers think of Oxenfree

There's very little game play here. Puzzles are extremely simple and frequently don't even have to be solved for the game to progress. The story was... decent. I was still a bit disappointed... but it... Read the review »