My first hour with Cradle was incredible. After waking in a strange tent (a yurt, actually) filled with creaking wooden furniture, incredible high-tech gadgetry and a cryptic note, I began exploring. The yurt was filled with faded black and white photos, newspaper clippings and sticky notes, and examining these I began to piece together the story of a worldwide epidemic and the extreme measures humanity took to survive. Who I was, and why I was alone with a powered-down android woman in the middle of a vast plain in Mongolia remained unclear, but the pieces were starting to form a picture. I managed to discern what many of the devices around me were based on and got to work trying to power them back on. There was a sense of great mystery to be uncovered. It reminded me of the very best parts of games like Gone Home and Myst, adventures that trusted the player to have the intellect and patience to find their way.

Unfortunately, Cradle doesn’t remain that game. After that hour of glorious wandering, reading, and poking around I had finally managed to activate the mechanical body on the table. We spoke, and within two or three minutes she had bluntly and blandly explained the entire backstory that I had spent the previous hour exploring on my own. At the end of the conversation, she gave explicit directions for what to do next. I did that, and then she told me what to do after that, so I did that next. Suddenly this was a very different game than the one I thought I’d be playing at first, and not a better one. Cradle continued in this fashion, telling me precisely what actions to take next, until it ended.

It’s still a fine game, but oh, what could have been! 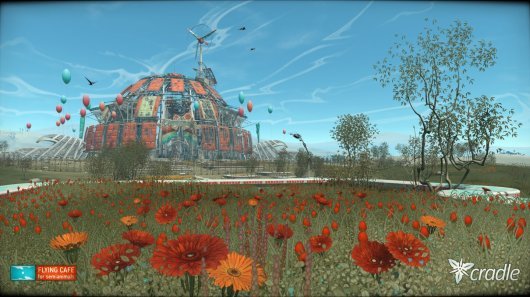 Cradle is the first game from Ukrainian developer Flying Café for Semianimals, which has to be the best consciously-quirky indie studio name I’ve ever heard. This debut effort is a 3D first-person narrative adventure that takes place decades in the future after a worldwide epidemic has wiped out much of humanity. The male protagonist, whose identity is unknown at first, wakes on the floor of the yurt with no memory – a tired but useful trope. The game revolves around his attempt to uncover the mystery of the robotic woman’s identity and how she came to be there.

The backstory to the game is fascinating. It’s a tale of a world dealing with an existential crisis in the form of a viral outbreak. Humanity, facing threat of extinction, is forced to rebuild its morals and mores around a new type of existence, one that leaps right over the clichés of post-apocalyptic fiction. It’s all wonderfully believable, told through dozens of news reports, magazine snippets, posters, old photos, and journal entries. Combing over the yurt and discovering the strange world of Cradle for myself was rewarding and memorable, until the game decided all of this information was better relayed in a droning info dump by the woman on the table. What was originally filled with mystery became rote exposition, over and over again. It is still a good story, one that stakes out its own identity in a crowded sci-fi subgenre. It’s also one I hesitate to go into more detail about because the most rewarding parts of this game lie in those details.

The story of the game itself, the one you partake in rather than just reading and hearing about, is much less intriguing. It centers on a few central mysteries: Who are you? Who is the woman on the table? And why is there an abandoned amusement park next to your yurt in the middle of Mongolian nowhere? Yet your own role in solving these mysteries is minimal. You’ll spend much of the game finding replacement parts for the robot woman who, upon receiving the replacement, suddenly remembers and dumps the next haul of exposition. Rinse, repeat. Even the core question of your identity is dismissed early with a definitive answer, and when the game later reveals secret truths, they answer to questions you probably haven’t asked. 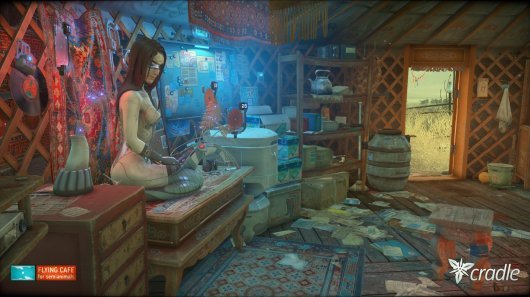 Even more disappointing is the game’s continual reliance on rehashing the same repetitive, time-consuming minigame. The amusement park holds several VR pavilions, each containing a similar arcade-y game that involves digging through layers of Minecraft-style blocks and avoiding falling into a pit below. It’s not difficult, but it’s surprisingly easy to paint yourself into a corner if you’re not careful with certain special blocks that are necessary to win. Failure means starting the entire minigame over. The first time you play the game, it’s an amusing aside. By the fourth time in a row that the game drags you back to play an ever-so-slight variation on the same game in order to gain a required item, any fun has been replaced with tired frustration. It feels like desperate padding, a strange thing for a game of only four or so hours in total.

Outside of these minigames, Cradle throws obstacles at you that could more accurately be called “tasks” than “puzzles.” Find and collect flowers from around the plain. Recharge some solar batteries to power up machinery. Cook some stew for a guest. Generally the game provides exact instructions as to how to accomplish things, which means the only challenge is sorting through the clutter to find the right items you’ll need, then slotting them into your limited inventory space (this limit is not an issue, as you’ll never need more items on your person for a task than you have available). Not exactly thrilling, but not bad either – these tasks make up the meat of the game and serve more as excuses to send you to various corners of its world than as proper puzzles. The puzzles, such as they are, are serviceably interesting even if they do not force you to tinker and explore the way the game initially implies.

All of this culminates in a deeply unsatisfying and confusing ending that comes seemingly out of nowhere. For a game in which every character constantly and explicitly describes everything they know, feel and want, it is bizarre that the ending features the protagonist suddenly pursuing a goal that no one has discussed. Indeed, the ending revolves around minor elements of the backstory that can only be found in newspaper clippings scattered in random places throughout the yurt. While I did understand what was happening in the end, I was confused as to why it was happening and how the protagonist had figured out things that should have been beyond his knowledge and comprehension. 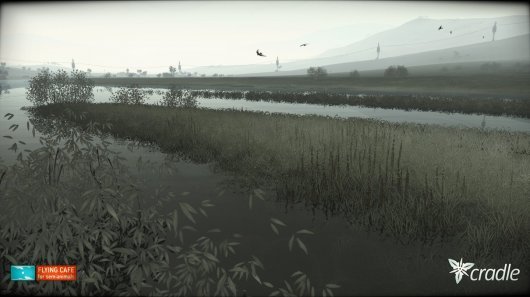 Even though the plot doesn’t exactly propel you through the experience, the world is a true joy to explore using the standard keyboard-mouse combination. The game features a fascinating and beautiful mix of bizarre future tech and relics of the old world. The yurt you wake up in is a simple cloth tent full of wooden furniture covered in chipped paint and rusting brass. Every detail, from the internal “organs” of the robot woman to the tins of spices in the pantry, is rendered in loving detail. The Mongolian plains stretch off seemingly to infinity and are full of small, atmospheric touches like flocks of birds darting across the sky and motes of dust lazily floating through the air. Machines litter the yurt and surrounding landscape, all with believable designs and specific uses. Many objects have modeled physics, allowing you to pick them up and either place them in your inventory or fling them around with the mouse – you’ll almost never need to do that, but it adds a sense of physicality to an otherwise fairly static world. It’s a science fiction future quite unlike what we’re used to seeing in games, and indeed most fiction. And it’s a technical achievement as well as an artistic one: the game looks great, excelling at both the intricate detail of the interior spaces to the massive scale of the wide open steppe.

Cradle’s audio follows the same general pattern of convincing world-building and underwhelming storytelling. The atmospheric sound design is excellent, while the voice acting is… not. The soft breeze, chirping birds, and rustling grass immerse you in the landscape, as does the yurt interior characterized by crackling stove fires and the hum of electronics. Characters move expressively – almost shockingly so – with smooth, seemingly motion-captured animation, yet as soon as they open their mouths the illusion is diminished. These are not real people speaking, they are voice actors reciting lines in a dull monotone with the strange cadence of actors who were never actually in the same room with each other (or so it seems).

In the end, Cradle is disappointing precisely because parts of it are so excellent. If there weren’t so many glimpses of a better game – one that trusted the player to explore at their own pace, one that gave players the tools to solve the mysteries themselves instead of dropping bricks of leaden exposition, one that didn’t recycle the same half-baked minigame to pad out its length – it would be easy to dismiss. Yet the world of Cradle is too compelling to ignore: the juxtaposition of old and new world, the unique Mongolian flavor, the exploration of the consequences of transhumanism. I just wish it was wrapped in a better game.

A passable game in a fascinating, unique sci-fi world, Cradle is fine to explore but constantly reminds you how much more it could be.

GAME INFO Cradle is an adventure game by Flying Cafe for Semianimals released in 2015 for PC. It has a Illustrated realism style, presented in Realtime 3D and is played in a First-Person perspective.