We get a small commission from any books sold.
Written by
Steven Watson — June 3, 2015

Hybrid adventure-RPG games are not a common occurrence. Even rarer are remakes of adventure-RPG text adventures designed for Apple II emulators. So rare, in fact, that Leadlight Gamma perhaps uniquely fills that niche market. Wade Clarke has remade his 2010 Interactive Fiction Competition entry, Leadlight, doing away with the Apple II emulator and making a more accessible game overall. It is still not without its flaws but it’s certainly an improvement, and if the idea of a fun horror romp with a heavily retro style appeals to you, then the game may well be worth your time.

In Leadlight Gamma you play as Belinda, an increasingly narcissistic, borderline-misanthropic schoolgirl who finds herself stuck in an horrific nightmare. Her teachers and fellow students have either become rabidly hostile or are suffering through incredible physical pain. The school itself has transformed into a place fatally dangerous to explore. Your job is first to survive, fighting off the school's inhabitants as well as its deadly traps, and secondly to uncover the truth about Belinda's past and the meaning behind this nightmare.

When the original version of this game was released, it was met with very divergent opinions. Some thought it too antiquated, that it would have been a great game in the 1980s but holds up miserably by today's standards. Others enjoyed it as the unapologetically retro horror game it is, finding much character in its brief descriptions, its mixture of puzzles and randomised combat, as well as its cruel array of sudden deaths. Taking these reactions on board, Leadlight Gamma tries to stay true to its original style while making it significantly more accessible. The prose and gameplay remain unchanged, but it no longer runs in an Apple II emulator and has been fitted with a tutorial, a soundtrack, a map and an extensive help menu. 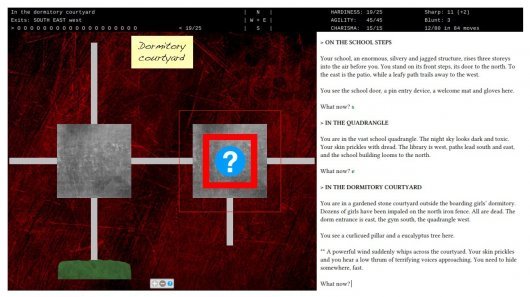 This compromise definitely helps. The tutorial makes the game very beginner-friendly, guiding you both through the basic Interactive Fiction (IF) customs and through Leadlight's more specific commands. The integrated help menu serves as replacement for a manual, while the zoomable map that tracks Belinda’s location mercifully saves players from pencilling out a map. But most significantly, the game has now switched engines and is bundled into a single executable file, which makes for a much more accessible and aesthetically palatable game. Unlike the stark white-on-blue text of the original game, with its oversized pixellated font, Leadlight Gamma adopts the mainstream design of modern IF: by default, a comfortable black-on-white layout, but with customisable fonts and colours. The map takes up a fair chunk of the screen, but both its position and size can be easily altered in the settings.

While the engine has been modernised over its predecessor by a few decades, the author has chosen to keep the two-word parser of the original intact – well, kind of. You can technically type commands that are three or more words long, but the game's designed so that all you'll ever need is two. The simplicity of the parser goes some way towards reducing confusion, meaning that you'll seldom be stuck trying to 'guess the verb' or otherwise reach an impasse on what command to type.

The one addition I take issue with is the soundtrack. It is incorporated into the game as a music player rather than an integrated backing track. In the main menu you can select to play the soundtrack, either through 'album’, 'track’ or 'loop’ mode. The album or track then plays over the game, basically as if you were playing the game along to an iTunes library. The music itself sets the mood appropriately, but it feels like a bonus feature to the game, one that many will doubtless miss. If it had been integrated into the game, perhaps with different tracks for different regions, it would have made the soundtrack both more accessible and more atmospherically effective. As is, it just feels hastily glued on top of the game as little more than a frivolous piece of bonus content. 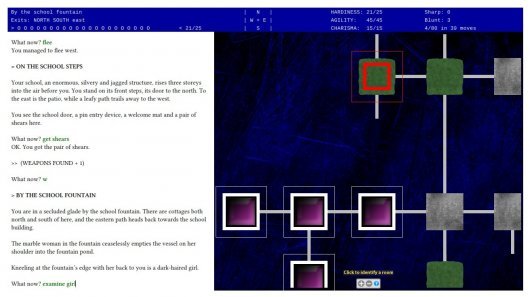 Reflecting on what's been kept, it was a wise decision to not change the prose. The terse writing makes for easy reading and suits the horror style well. Descriptions are often vividly repulsive but terribly good fun. The remains of your teacher, Mrs. Palmer, are described as 'horrid, stinking slush' – not to mention the 'strawberry swirl of blood' seeping from the remnants of a fellow student you killed. Clarke clearly had fantastic fun writing these. Granted, none of the writing will necessarily impress the reader, but it will often amuse with its brief, playful grisliness.

The story itself is nothing exceptional – a trite tale of cursed ancestry – but it does sustain somewhat of a mystery and provides a good backdrop to the rest of the game. The more interesting stories are the fragmented ones you find around the school. There's a backpack lying beside one corpse, for example; inside it, a note from the student's mother reminding her to have lunch. It's these touches where Leadlight Gamma is at its best.

However, it is the gameplay, not the prose, that defines Leadlight Gamma. This is a journey through battles with zombified classmates and into puzzles of incredible danger. The combat itself is uninteresting. You have only one command – >attack – and you repeat it for several rounds until you or your opponent is dead, performing the same sequence for the dozen or so battles in the game. There are several weapons and a few clothing items, but the difference they make is minimal, simply giving a mild boost to your handful of basic combat stats. The process can get tedious, often requiring you to save and reload during combat so that you can try again in hope that the randomised outcome will work in your favour on another try. You can attempt to flee and come back later, but you'll have to face most of them eventually, especially if you want a high score. On the plus side, fighting requires no skill at all, which means it shouldn't be an impediment to any adventure gamer who is RPG- or strategy-averse. 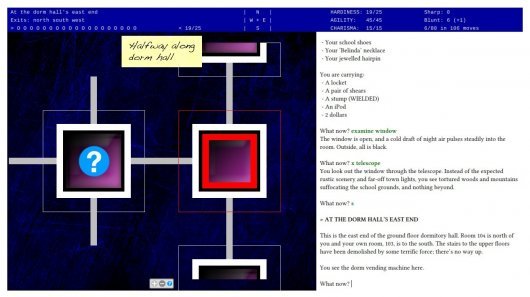 Fortunately, the puzzles are better crafted than the combat. None are particularly difficult, but some are actually quite inspired. Some are very abstract but nevertheless logical: instead of opening a safe by key or dial, you open it, in effect, by using colour. And on the other extreme, some allow for the most obvious and satisfying solutions. I was surprised, for instance, just how often I could solve problems by smashing things – a joyous affront to the obfuscation adventure game puzzles are often known for.

Even if you do get stuck – which this author will sheepishly confess may have happened once or twice – there's a clever hint sheet that will point you on your way. Each puzzle solution is coded in the form of numbers. These numbers correspond to words listed at the bottom of the page – 93 means password, 31 means smash, and so on. This makes it hard for impatient players like myself to rely too heavily on hints, as the process of decoding them, while simple, is laborious.

While playing you will discover various secrets and traps that help determine your final score. Secrets are little bites of narrative that you can discover by playing around with the game world, from returning a lost locket to coaxing a diffident mouse to come out of its hole. Traps are similar to secrets, but mean sudden death. Thankfully, you can always go back a move after encountering one. For me these were a highlight. At one point I came across a school tie, and naturally decided to wear it. Later in the game, however, I unlocked a ladder which automatically shot up in reach of a balcony. As the ladder rose abruptly, my tie got caught; I had inadvertently hanged myself. Many traps are even more ludicrous than this, but because they are so easily undone they are never frustrating and are frequently humorous. 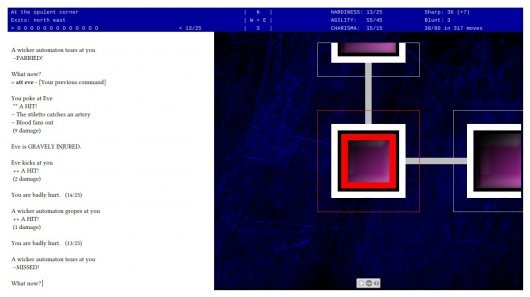 The traps and secrets do give a strong motivation to replay the game, especially as discovering every single one unlocks Easter eggs and extra content. But replaying can be a grind. The combat, already dull on the first playthrough, becomes an incredible chore the second time round. I imagine only the most dedicated and obsessive gamer will actually keep going to unlock everything and maximise their score. But even without replaying there is plenty to do in a single playthrough, probably lasting the average player nearly three hours.

Leadlight Gamma is a solidly fun game. Yes, the combat is too repetitive, and can make replaying the game more tedious than it needs to be. And the soundtrack feels superfluous and inaccessible, when it could have been integrated into the gameplay itself. But overall the terse, stylised prose and the delightfully gruesome setting sets the stage for an enjoyable horror game of ridiculous deaths and well-designed puzzles. If you're in the mood for an accessible retro text adventure-RPG hybrid that will amuse you for a good few hours, then definitely pick it up.

Leadlight Gamma is available at:

Packed full of horror-filled fun, Leadlight Gamma is a retro text adventure worth checking out for those not averse to some light RPG elements.

GAME INFO Leadlight Gamma is an adventure game by Wade Clarke released in 2015 for Mac, PC and Linux. It has a style, presented in Text Only and is played in a None perspective.