The Adventures of Bertram Fiddle: Episode 1 - A Dreadly Business review

The Adventures of Bertram Fiddle: Episode 1 - A Dreadly Business  (2014)

The Adventures of Bertram Fiddle is a planned three-part cartoon murder mystery series from Rumpus Animation. Originally released exclusively for iOS and Android platforms, now Episode 1 - A Dreadly Business has arrived on the PC, and proves to be a fun little mystery in its own weird little way, though without the memorable characters or genuinely amusing dialogue to make it a standout debut.

A Dreadly Business follows Bertram Fiddle, “Leading Victorian Explorator” and his Peruvian cyclops manservant Gavin as they hunt for a serial killer, the notorious Geoff the Murderer, who has accidentally ended up with custody of Mrs. Fiddle's precious dog. The plot is well written and easy to follow, though there's not much of a “whodunit” aspect. It's made clear from the start that Geoff is a distinct character, rather than the secret identity of one of Bertram's many friends and acquaintances that you meet along the way – or at least, Fiddle certainly believes he is, and pursues the case accordingly.

The first episode largely follows a questing format, as you trail Geoff from one area to the next in an attempt to both show up Sherlock Holmes and avoid being harassed by Mrs. Fiddle when she finds out her husband has lost her dog. There are of course smaller objectives along the way, such as recovering compromising pictures for a certain Lord Arthwipe and figuring out a way to vault over a locked garden wall, not to mention piecing together the missing components of a disembodied head. 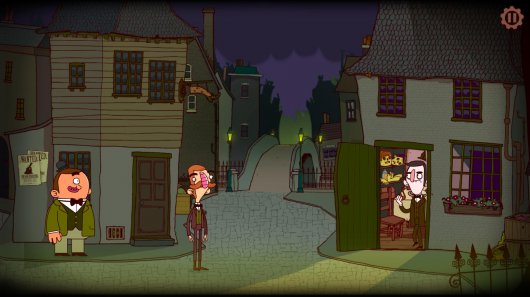 Gameplay is fairly linear, confined to a few scrollable screens at most at any given time. The mechanics are very easy to get used to; a single-click performs all functions, hotspots are clearly indicated when hovering the cursor over them, and the inventory is quickly accessed from the left-side of the screen. My only slip-up came when the gameplay abruptly shifted to a side-scrolling chase scene and it took me a few moments to recollect myself and realize I had to use the arrow keys to avoid obstacles. Though the minigame itself is a very refreshing change of pace, a little warning would have been nice. A second chase later on was much easier once I knew exactly what to do. If you do fail, the game automatically puts you back at the start of the chase to try again.

The game doesn’t require you to chase down multiple plot threads at once, but it’s no fun getting stuck and frustrated on your lone current task, and you can’t count on any kind of hint system, hotspot highlighter or journal to help you out. Due to the relative scarcity of items to collect, there are never too many inventory options at any given time, which makes the puzzles relatively easy to solve once you have everything you need. But most of the solutions require getting into the developer's head, using and combining objects in interesting ways, such as when you are required to rustle up some candy for small children (in the absence of real candy you are required to be disgustingly creative). I was more disappointed in the lack of variety as a whole, because other than the two chases, every other puzzle was inventory-based. Even Gavin, the manservant, is ultimately used like an inventory item the few times he’s actually utilized at all.

The inhabitants of Bertram's 19th century London have their own quirky way of talking, using words such as “bemuddled” and “photomographs”, which I found a bit jarring at first. I quickly got used to it, though the characters remain the weakest aspect of the game. The entire cast is a collection of oddballs, but they all come across as quirky for the sake of being quirky rather than contributing anything to the story. For example, one of the men Bertram encounters happens to enjoy getting massages by a gigantic dodo bird. While very peculiar, this oddity doesn’t change your approach to him or factor into the puzzle-solving required, which made it ultimately irrelevant. The man could have been sitting in a chair drinking a cup of tea and the end result would still be the same. 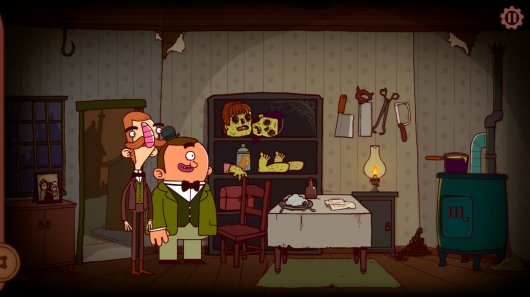 No one is particularly fleshed out or memorable; unfortunately that includes the bumbling Fiddle himself. The famous Sherlock Holmes and Watson make an appearance, but even they seem to be placed more for recognition factor than how they impact the plot. The characters do move the story along and no one seems to be out of place in the story, but it’s a wasted opportunity to have so much weirdness have so little significance.

Conversations are all pre-scripted, offering no choice of what Bertram talks about or what direction the dialogue will go. In fact, there’s no interaction at all once the discussion is started, as the rest plays out automatically. However, dialogue can be clicked through line-by-line if you accidentally re-start a long-winded conversation, which was a nice option to have. The script, while pleasantly lighthearted, feels like it’s trying very hard to be funny and inserts as many puns as it possibly can, but falls short of anything approaching truly hilarious dialogue or witty repartee.

The graphics are clearly Bertram Fiddle's strongest suit, which is no surprise considering Rumpus is an animation company. The character animation is clean and smooth with no jumps or breaks, and the character designs are fun and fit the whimsical atmosphere well (particularly if you like strange noses). My favorite is Gavin, the cyclops manservant of Bertram, who also happens to be the only person with a normal-looking nose. Roundly pear-shaped and colored with greens and browns, his tiny little bowler hat is a cute touch, and his palette perfectly balances out Bertram’s purples and pinks. 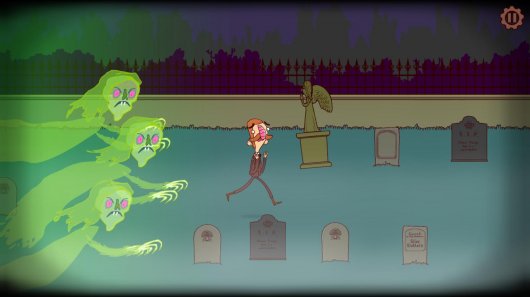 Background artwork also suits the story; even with its stylized cartoon aesthetic, the seedier parts of London look extremely gruesome, not to mention the disgusting sewers and a walled-in and clearly neglected garden. Fiddle's own house and a few other indoor locations are brighter and more colorful, with more hotspots to click on for Fiddle to offer up commentary on, such as the stuffed mythical creature heads and the porcupine canapés served at the Adventurers Club.

Rounding out the production quality, the game’s sound design is good, though nothing memorable. Music plays sporadically, ranging from sinister to jaunty with some odd accordion bits thrown in for good measure, but I especially enjoyed the faster paced music during the chase sequences and the creepy tracks playing in the back alleyways. The vocal performances are good, and the voices all fit the characters extraordinarily well, particularly Bertram’s high-pitched and slightly nasal whine, which is just bizarre enough to be distinctive without becoming annoying. Gavin doesn’t sound very Peruvian, but he’s not really given much to say anyway.

The episode can be finished in as few as 2-3 hours for experienced adventure gamers and comes to a satisfactory conclusion, considering it’s only the first of a three-part game. Ending without a cliffhanger, it manages to wrap up all the plot threads except for the key business of catching Geoff the Murderer. Overall, A Dreadly Business is a well-made game, though it isn't a particularly memorable one. While it doesn’t really do anything wrong, or even poorly, it does nothing spectacularly right either, instead landing somewhere comfortably in the middle. So don’t expect to be dazzled by its story or gameplay, or laugh yourself silly at its jokes, but if you enjoy Victorian London, oddball cartoon characters and strange noses, give The Adventures of Bertram Fiddle a whirl.

More quirky than funny, A Dreadly Business is by no means spectacular, but nor does it do anything wrong, settling for being a solid, well-made debut episode.

GAME INFO The Adventures of Bertram Fiddle: Episode 1 - A Dreadly Business is an adventure game by Rumpus Animation Ltd released in 2014 for Android, iPad, iPhone, Linux, Mac, PC and Xbox One. It has a Comic cartoon style, presented in 2D or 2.5D and is played in a Third-Person perspective.

What our readers think of The Adventures of Bertram Fiddle: Episode 1 - A Dreadly Business

2.5 stars out of 5
Average based on 6 ratings
Your rating