When I first started playing Belladonna, I had no idea of what it would be like. I knew that Belladonna was the name of a poisonous plant, and that the game was at least partly inspired by the story of Frankenstein, but that was it. I didn’t know that it was essentially a written short story told through numerous journal entries and framed by some light adventure elements. So that was unexpected, but the central tale is interesting and I was pleasantly surprised by the game’s atmosphere and sound design, despite the fact that it only lasted about 45 minutes.

Belladonna tells the story of a reanimated corpse with a giant wind-up clockwork mechanism protruding from her bald head, who walks around a deserted castle collecting journal pages. In doing so, she hopes to figure out what happened to the inhabitants of the mansion as well as discovering who she is, as she has no memory of her past before waking up on a mad scientist’s slab. It’s a premise with great potential, but it never really has a chance to develop naturally. As the game went along, I barely finished reading one journal entry before I found another, leaving no time (or need) between them to ponder the protagonist’s identity or investigate what she was doing there.

The pages are very easy to find, simply lying around the castle in plain sight because the puzzles in the game are pretty minimal. There are inventory items to collect and even some object combinations to perform, but they are few and far between and very simple. I can only think of two points where it wasn’t supremely obvious what I had to do for the next step, and even those parts were very much “puzzle-lite.” With a limited area to explore, adding puzzles in order to collect even half of the journal pages would have made the experience much more enjoyable, not to mention longer and more substantial. It would have been more logical thematically, too. Most of the journal pages are highly confidential, so it makes no sense for them to be strewn carelessly about. 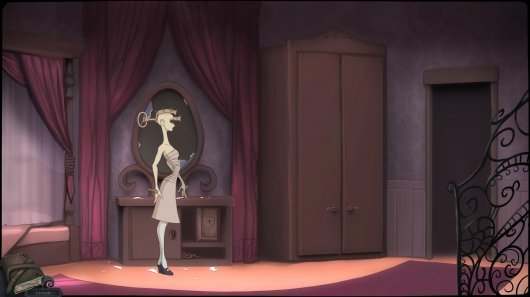 The tragic backstory of love and loss was interesting enough to hold my attention throughout, and the journal pages do a good job of fleshing out the former castle inhabitants from a distance, but the game does suffer somewhat from a lack of tangible interaction. There are two other characters in the game, only one of whom you can talk to, leaving little room for conversation or character exposition. The protagonist does offer comments whenever you click on hotspots or enter a new room, so there is at least some dialogue to break the silence, which I appreciated, though she never says much that’s very enlightening.

The atmosphere created is on the creepy side, as befits a story about the dead brought back to life, but it’s not intended as a horror story and I didn’t find myself spooked by it. The hand-drawn art is clean, with a consistent and appropriately dark and macabre color palette. Most of the castle is varying shades of grey with some darker browns and black, as well as a sickly green color for the underground laboratory. My only complaint is that the character design of the protagonist is a little awkward, and from a side view it looks like her back is broken, so squeamish people beware. Apart from the perpetually unwinding key on the back of the protagonist’s head, animation is limited and a little stiff, particularly noticeable when climbing stairs.

The sound design is good, though nothing memorable, with appropriate background noises and suitable background music throughout the game that complements the visual atmosphere. The voice acting is passable; I was having a hard time deciding whether or not the main character sounded awkward and somewhat stilted because she was a reanimated corpse or because it was simply mediocre voice acting, but either way it worked. 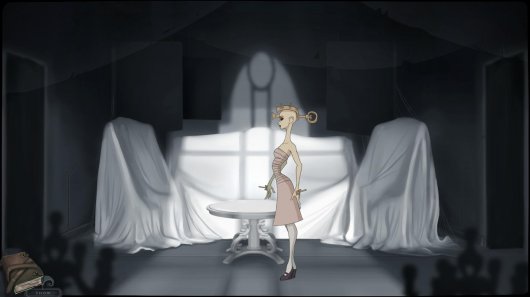 The interface is simple yet effective, and the lack of tutorial isn’t a hindrance given that the gameplay consists mainly of moving ahead in a linear fashion and collecting journal pages. It’s point-and-click in its purest form, with a single left-click performing all actions and a smart cursor highlighting hotspots when you pass over them. There are no help features of any kind, but in a game this straightforward and easy, none are needed.

The bottom line is that Belladonna is a decent game for what it is, which is essentially a collection of letters with some adventuring framework rather than the other way around, at least until the very end. At less than an hour from start to finish, it’s extremely short and feels more like a prototype or prologue than a full game, and the final splash screen hints that there may indeed be more to come. I hope there is, because this is a good-looking, well-made primer that holds a lot of potential for future expansion. But here’s hoping that any future installments attach a little more gameplay meat to the skeletal adventure structure offered up here.

Belladonna is a very short but engaging diversion for people more interested in reading than actual adventuring.

GAME INFO Belladonna is an adventure game by Niklas Hallin released in 2015 for PC. It has a Illustrated realism style, presented in 2D or 2.5D and is played in a Third-Person perspective.

What our readers think of Belladonna