When imagining a game based on the Italian pulp character Corto Maltese by Hugo Pratt, I envision a wide-open game filled with high adventure, sailing along shores and across European seas in the late 19th century. Given the rich history of the protagonist since he was originally created in 1967, there was a wealth of possible resources to be tapped. Instead, Corto Maltese: Secrets of Venice, by Kids Up Hill and now-defunct French developer Lexis Numérique, delivers quite a narrow representation of a beloved fictional adventurer. The present-day plot is underwhelming to the point of being boring, while the puzzles are isolated to minigames and riddles, almost never adding to the progression of the story. This game may be intended as a love letter to Pratt’s work, but it’s disguised as a very casual puzzler that really doesn’t do justice to its source material. Maltese fans may still enjoy it somewhat for nostalgic reasons, but newcomers will find very little here to understand the appeal.

Players don’t control Maltese himself, but rather take the role of an unnamed, unseen protagonist who wakes up in a café after a night of drinking and partying. Hungover and disoriented, you are greeted by the café’s mob-type owner. As a remedy for your hangover he you gives you a drink, but after consuming it you discover that you have been poisoned, and the only way to get the antidote is to do the man’s bidding. He asks of your knowledge of the sailor Corto Maltese, then explains that Maltese met with six women, each of whom was offered an emerald. When these jewels are assembled, they create a rosette called the Key to Solomon. In order for you to be cured of your poison—which is purportedly too old to be treated with modern medicine—you must journey across Venice and retrieve the fabled gems. The relevance of the Key of Solomon is not explained, and why the man randomly chose a drunken nobody seems completely irrelevant.

To get you started, the man equips you with a gazette—a magazine filled with background information about the six women Maltese encountered—and a compass, the one and only object you’ll use to solve all the puzzles. Rather than a traditional adventure, you don’t so much go exploring as find yourself being guided through scene after static scene, not unlike the developer’s previous Red Johnson series, though here you’ll (largely) be investigating the back alleys of Venice. There are only a few instances where you’re even allowed to move from one room to another, which isn’t nearly enough to offer any real sense of freedom. Each stop contains hidden symbols that must be entered into the top of the compass like a combination. Each combination then initiates a puzzle-like minigame or riddle that will reveal your next destination. 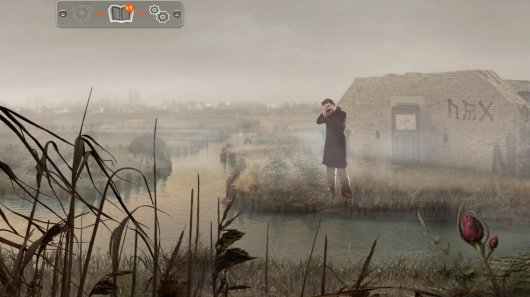 For every puzzle combination you find, there are two options to enter into the compass, one easier and one harder. I often chose the lesser of the difficulties, which I found quite manageable. The harder ones not only require more in-depth thinking, but the game even warns you that you may need external internet assistance to solve them. Many of the challenges consist of brainteaser-style logic puzzles, like drawing non-overlapping lines between colored dots on a grid multiple times in a row, or decoding a message of numbers into an answer (the first of which is, unfortunately, clued blatantly wrong). There’s a fairly decent variety of tasks, but not all of them are equally interesting. One puzzle involves simply looking at a series of landscapes and pinpointing numbers hidden in the lakes. If you find yourself stuck, there is a hint system that gives you layered clues on to how to solve the current puzzle. The last hint often tells you exactly how to solve it without directly giving you the answer.

The tasks themselves can be fun diversions, but there’s nothing you can’t find in your run-of-the-mill puzzle game. The problem is that they are so isolated from the story, acting only as a means to give you something to do while continuing along your linear path. None of the compass puzzles are related to any other, and puzzle-like environmental interactions are far and few between, like finding a specific object for someone based on the clues provided. The combinations to initiate puzzles are hidden throughout the environment, but are placed so obviously that it defeats any potential thrill of scavenging to find them. On the back of the magazine is a long list of ingredients needed for the poison antidote, yet the ingredients are simply collected and checked off as you go along, eliminating any sense of danger or urgency. I quickly realized that there would be no critical thinking required in order to cure myself.

The non-melding of story and gameplay gives the game a troubling identity crisis. Since the puzzles aren’t at all integrated into the plot, but rather seem to be competing with it, I couldn’t become fully interested in either. I didn’t really care about the puzzles since they distracted me so much from the story, but the constantly-interrupted story itself was too vague and poorly translated, missing a strong motive for me to grasp onto. With no real urgency to even heal myself, my only real interest lay in seeing the intermittent black-and-white Corto Maltese motion comics along the way. Although very basic they are beautifully stylized; I wanted to stay in them, wander around and click through them, but no such opportunity arose. Even so, they are quite a joy to watch. 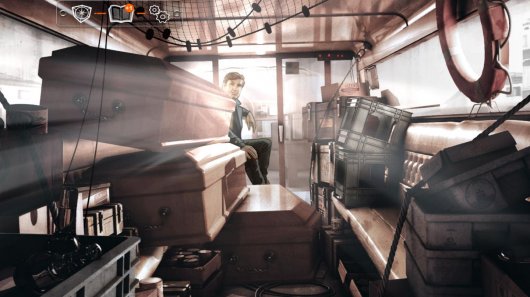 These motion comics represent a concerted effort to fuse Maltese’s past with your present, intercutting flashbacks as though you’re vicariously living his own journey by following in his footsteps. The game also tries to create a surreal atmosphere by having you encounter the ghosts of Maltese’s old friends, but then turns around and excuses it as the poison having hallucinogenic effects. You have no more control over conversations than anything else; aside from a few occurrences where you're given the opportunity to answer yes or no to a question, you’ll have no choice of what to say, which severely limits the opportunity to learn more about or become attached to anyone (including the protagonist). One of the more interesting characters is Occhi Di Cristalo, a boatman, taxi driver, and graveyard caretaker, who acts as your means of transportation as you travel between locations.

The gameplay interface is fairly minimal. In the upper-right corner of the screen are icons for the compass and gazette. Otherwise, the screen is left completely clear to view the environment. There is no smart cursor indicating hotspots, leaving you to guess at which items in the highly detailed backgrounds might be interactive. However, in an odd decision that must have been designed to cater to mobile devices, clicking anywhere on the screen and dragging the cursor moves the camera very slightly and causes hotspots to sparkle briefly. Within the close-up compass puzzles, sometimes you’re required to type in answers, while other times you’ll use the mouse to manipulate the screen in various ways. 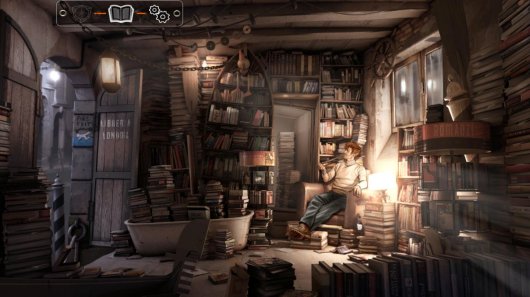 The background artwork is beautifully hand-painted, as are the transitional still images that display when travelling from place to place, but the realistic look simply doesn’t have the imagination of Hugo Pratt’s simple illustrative style. In-game characters you meet appear to be rotoscoped images of 3D models, and show very little variety in either stance or expression. In fact, there is no animation in the game aside from the motion comic. The absence of voice acting further contributes to the game’s serious lack of atmosphere. Thankfully, the music contributes some much-needed ambience: it’s mysterious and dramatic, with slowly-played distorted guitars lingering in the background.

The game spans seven chapters, each of the first six representing one of the women to whom Maltese gave a jewel. Depending on your ability to solve the puzzles, a chapter can be completed in under a half an hour. Thankfully, the game offers loads of memorabilia that can be unlocked by solving puzzles or clicking certain items in the environment. Bonus content includes additional stories involving Maltese and original watercolor artwork by Pratt that can be viewed in the gazette. At first much of the text inside the magazine is blurred and faded, but every time you solve a puzzle more of the text becomes visible. On occasion there’s a hint buried within it, but it isn't completely necessary to read as most of the text just provides additional backstory. This adds a little more time to an otherwise short game that takes only about three hours to complete. It's probably a little too long for one sitting, which is too bad, since the game inexplicably offers no way to exit it naturally.

Between the flashback comics and magazine extras, the game is very much a time capsule of Maltese’s history, recapping the tales of his most notable adventures. Unfortunately, in forcing the nearly 50-year-old pulp protagonist into a casual puzzler, both the story and gameplay are a letdown in comparison to the legacy they’re trying to uphold. Secrets of Venice does a great job of honoring Hugo Pratt’s original artwork, but the cinematic flashbacks couldn’t be more different than the style used for actual gameplay. And those expecting at least a scenic adventure through lovely Venice will instead see the great Italian city mainly through a narrow perspective of indoor rooms and alleyways.

For fans of the title character and his creator Hugo Pratt, Corto Maltese: Secrets of Venice will be a stroll down memory lane, albeit one constantly interrupted by meaningless puzzles. Puzzle fans, meanwhile, may be bored with the scattershot plot and history of a character they’re given little reason to care anything about, yearning only to get to the next challenge. Ultimately, this game comes with major caveats for all audiences, and is perhaps best recommended to casual adventurers who don’t mind a disjointed but slick-looking narrative framework for their puzzle-solving fix.

Hugo Pratt’s title character is nicely represented through collectible memorabilia and original artwork, but Corto Maltese: Secrets of Venice fails to deliver an engaging story or gameplay experience worthy of its source material.

GAME INFO Corto Maltese: Secrets of Venice is an adventure game by Lexis Numérique and Kids Up Hill released in 2014 for Android, iPad, Mac and PC. It has a Illustrated realism style, presented in Slideshow and is played in a First-Person perspective.

What our readers think of Corto Maltese: Secrets of Venice