Adventure games by The Domaginarium

There is no shortage of horror games that cram their dark corridors with spooky shadow men, smears of blood, and coils of barbed wire. What seemed so nightmarish ten years ago in the early Silent Hill games can now seem trite. A large part of the reason those early games were so effective was that the horrific imagery wasn't there simply for shock value, it was tied emotionally to the story. Monsters weren't just random collections of gore and spikes, they were symbols of characters' damaged psyches. The world was a physical manifestation of traumatic memories. The horror meant something.

Enola, by small El Salvadoran indie team The Domaginarium, understands that. The game spins an unsettling yarn that deals with mature themes we don't normally see in games, bringing it to life through unflinching writing and some deeply haunting allegorical imagery. It's a shame, then, that what could have been a truly memorable adventure is contained within an amateurish, boring, and at times broken game.

The story centers on two young women: Enola, the player character, and her girlfriend Angelica. Within minutes of starting, and without much explanation, Enola is thrust into a nightmare world generated by Angelica's traumatic memories. We don't know why this world exists, whether it is real or purely metaphorical, or what rules it follows, but that's okay. It's a place generated by strong emotion – it's probably not going to make a lot of sense. 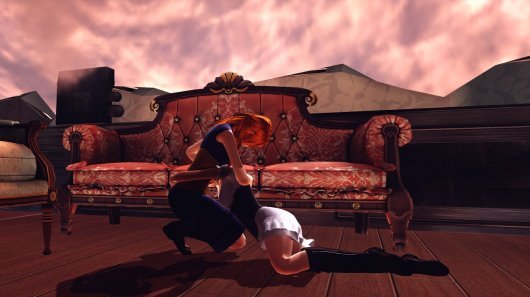 Enola finds herself on a beach in front of a massive, impenetrable vault door with a keyhole. Leading away from the beach is a path out into an open world where Enola must find her way into various levels that represent Angelica's dark secrets in order to find the key to the vault. An eerie moonlit forest serves as a hub area, populated with oddly-placed structures, from log cabins to cemeteries to massive concrete towers, which lead into the sub-levels.

The perspective is first-person, with only a few key controls beyond the standard WASD movement scheme. You press a button to interact with the world contextually, picking up items, opening doors, and flipping switches with the same key. You can crouch in order to hide (which never really seemed necessary) or to duck under traps. There's an inventory screen as well, since you'll occasionally collect a few items at a time. The controls work well enough, though they can feel a bit floaty and awkward during the few times when reflexes or care is required. These are rare enough that it's not much of an issue, however. While the game can only be saved manually at certain locations, save points are frequent enough that any semi-vigilant player will never lose more than a few minutes of progress.

Most of the time you'll be wandering through nearly empty, almost-identical corridors, devoid of danger or even the sense of it. The art design is generally poor, with maps that lack detail, appropriate scale, or consistency. The different levels are varied in theory – a nightclub, a church, and a mental institution, to name a few – but no matter where you are, you'll spend a lot of time in grim hallways covered in rust. The models and textures seem to have been plucked from stock art collections with little concern as to whether they share a uniform aesthetic. The nightclub’s dance floor, for example, is a cavernous room wrapped in a flat brick texture with a few stock tables and chairs spaced dozens of feet apart, a low-detail steel bar that must be eighty feet across with low-poly shot glasses spaced evenly every few feet, and a stock jukebox that has been plopped against the wall. The hub area similarly lacks detail, with buildings, trees, and rocks seemingly dropped in randomly with nothing but flat ground in between. There are some areas that look pretty nice, such as a surreal tower constructed in the midst of a swirling vortex, and a house that has been ripped apart by… a swirling vortex, but these are the exception that proves the rule. Collision bugs plague the game as well. I fell through the map more than once and occasionally got hopelessly stuck on the geometry, forcing me back to the previous checkpoint in order to continue. 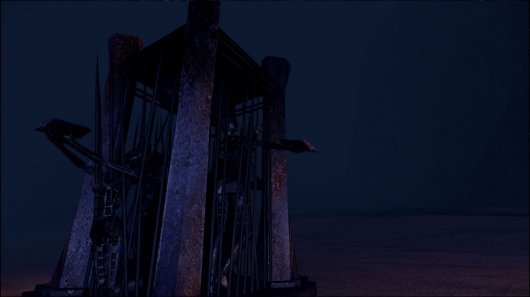 The sound also makes little impression. Most areas are more or less silent, except for some light wind or the noise of distant grinding gears. Musical cues play at scripted moments and represent one of the high points of Enola. It’s appropriately moody, and there’s a decent variety of mournful violins and detuned pianos. The voice acting, too, is generally serviceable, and certainly not as bad as one could imagine in a game of such limited production values.

It’s the gameplay that really matters, of course, but unfortunately the puzzles fall squarely into the "been there, done that" category. And they've been done much better elsewhere. You'll spend almost all of your time collecting coins or tarot cards that will go into slots on a door or cabinet in a specific order determined by a riddle found nearby. When correctly placed, they will open the door that leads to the exit. Again, this shows a Silent Hill influence, but not necessarily the good kind, as these puzzles feel arbitrary and unsatisfying to solve. There are environmental puzzles as well, like finding ways to move platforms around or activate strange machinery, but these are similarly rote. They often require items stored in an unassuming back corner of a room, and those that aren't confusing or nonsensical are simplistic and boring. It's less about figuring out how to use the items you have and more about finding the one or two interactive items in the level and the associated spots into which you can plug them.

There are a few enemies to be found, appearing at scripted moments, ostensibly turning the game into an Amnesia-style horror game. You cannot retaliate, only run from these shadowy wraiths. The intention seems to be to set up tense escape situations, but in reality these play out in one of two ways: 1) they are so slow to react to your presence that you can walk right by them without being attacked, or 2) they spawn so suddenly and so close by that you cannot get away, triggering a Quick Time Event to escape their grasp. They only appear a handful of times and never make an impression, good or bad. Their presence feels tacked on, never more than a momentary distraction. 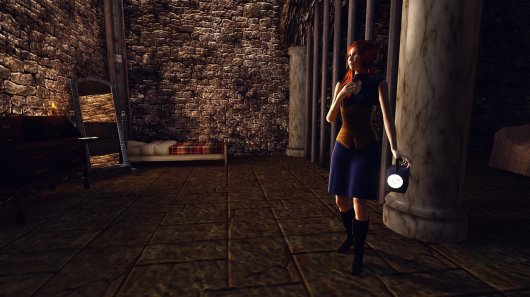 There are a few bright spots in Enola – or rather, some dark spots. The game is at its best when it refuses to pull punches with its story and imagery. Angelica has some truly tragic moments in her past, and the game attempts to portray them both realistically and allegorically. There are diary entries placed throughout the game that tell the "true" story that led to this nightmare world Enola is exploring. The content is horrific: sexual assault, torture, and gruesome murder are not treated with kid gloves. These writings are short but solid, often effective at portraying the confessions of the game's damaged characters, despite some apparent translation quirks.

Enola also contains some disturbing scenes that manage to overcome the otherwise lackluster art design: horrifying tableaus of twisted machinery, statues covered in nails, or corpses wrapped in barbed wire, encased in rust and blood-covered chain link – nothing we haven't seen in other, better games, but striking nevertheless. It's a shame that these are surrounded by so much bland ugliness that the effect of these moments is soon dulled. The vast majority of the three or four hours of time you’ll spend with Enola are frightless and bland.

I'd venture to say that Enola is a good story, badly told. The game tackles issues that are rarely seen in games, let alone handled with such maturity. There are moments where this quality shines through the layer of mucky amateurishness that coats nearly every element of the experience. The pieces are in place for a memorable psychological exploration of the dark side of love and lust, but the execution fails on critical levels. The end result is unpolished, awkward, and repetitive. It's also occasionally fascinating, but not often enough to make it worth your while.

Full of promise but little enjoyment, Enola is a unique and disturbing story wrapped in a bad game.

GAME INFO Enola is an adventure game by The Domaginarium released in 2014 for Mac and PC. It has a Illustrated realism style, presented in Realtime 3D and is played in a First-Person perspective.

What our readers think of Enola 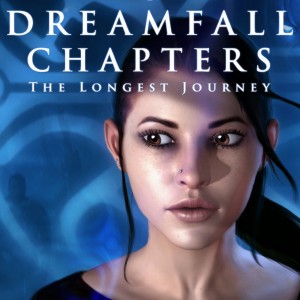