Often in horror games you’re faced with having to fight or run away from the evil that wishes to consume you, but what happens when that evil is in your own inescapable mind? Indie developer Matt Gilgenbach has wonderfully captured this horrifying possibility with his beautifully illustrated Neverending Nightmares. With its distinctive art style, it is a creepy, atmospheric game with memorable visuals that will continue to linger with you long after its short playing time. There's an intentional lack of any real gameplay other than exploration, and at times the pacing feels more slow and monotonous than moody and tense, but there is a lot to appreciate about this game, and it’s often awe-inspiring in the midst of its bleak, disturbing imagery.

Neverending Nightmares is a very personal project for Gilgenbach. Shortly after the release of his first game, the music-based rhythm shooter Retro/Grade, he admittedly fell into a deep depression. To cope with his own anxieties, depressions, and OCD tendencies, Matt turned to the drastically different genre of psychological horror and set out to make a game that he could relate to. (Though hopefully not quite to the degree depicted here.)

The game begins with the distressing scene of a little girl being stabbed from the player’s point of view, followed by the protagonist, Thomas, waking up from a horrible nightmare. From there you wander around a Victorian-style home, lit only by candles and the moonlight outside, to a graveyard where you discover that Gabrielle, your sister, is deceased. Suddenly Thomas wakes up again, as though this was just another terrible dream. This opening sequence establishes the recurring premise of the game: endlessly waking up from your neverending nightmares, only to find that you’re still in another that's even worse than the last. 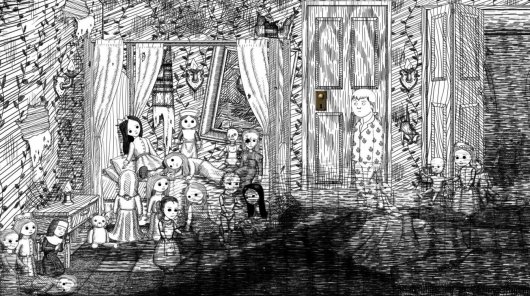 Upon each awakening, a small cutscene occurs, hinting as to what is going on with Thomas and what happened to Gabrielle. There are several paths that can be taken to complete the game, resulting in three different endings. The different paths result from rather arbitrary actions, but upon completing the game the first time through, a handy autosave system lets you pick up the story again in the general area where the branches split off. Explaining the results of these paths would inevitably spoil too much of the game, but I will say that they purposely contradict each other. This allows for multiple interpretations of Thomas’s madness, and a welcome distortion between reality and nightmare.

Featuring a completely hand-sketched, pen-and-ink style that is amazing to look at, any scene from the game could be mistaken for a page out of an Edward Gorey book. Aside from using color to signify the rare interactive objects, and an abundance of red for the large amount of spattered and smeared blood you’ll come across, the game is displayed primarily in black and white. The artwork doesn’t even have shades of grey to represent shadows and darkness, but instead uses layers and layers of scratch-like pen lines to achieve the same effect, which makes for a great, almost psychotic vibe. 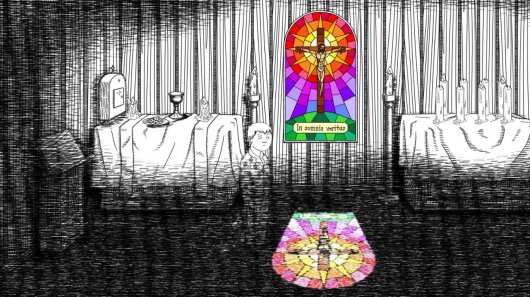 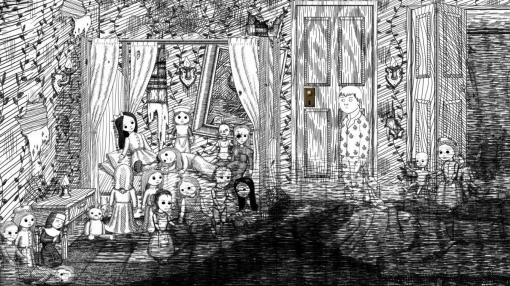 You’ll explore a variety of different rooms within just a few distinct environments, from a sprawling mansion to a psychiatric ward and through a forest and nearby cemetery. Every object along the way, including the many pieces of eerie art and portraits hanging in the hallways, has been illustrated with the same thin, scratchy pen work. Time and time again, I couldn’t help but just stop and admire the scenery.

While similar in style to a dark children’s book, Neverending Nightmares still managed to give me chills. As the game progresses through the nightmares, the setting becomes increasingly horrific and the lighting ever darker as the environments merge disturbingly together. Eventually the doors of your Victorian home will lead directly to cells of the asylum, the pathways littered with heavily-cobwebbed dolls, disembodied limbs, and even stacks of decapitated bodies. And yet, despite all the blatant gore, it still manages to feel almost tastefully restrained, offering just enough to make the horror feel authentic without burying you in excess. 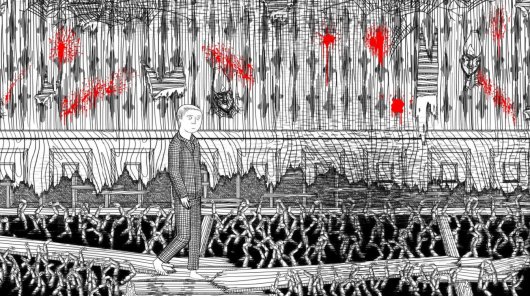 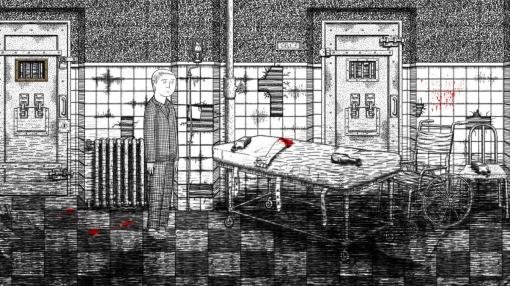 It’s a good thing the timeless artwork is so appealing, as the game is weighted much more on style than it is substance. In fact, I found virtually no challenge at all in Neverending Nightmares. Overcoming what few obstacles there are is a simple matter of finding the right intuitive object to proceed (e.g., an axe for a boarded door or a candle to get through a dark area). None require any thinking about a solution, just finding the specific item nearby to accomplish it.

There are some enemies, but even these are a matter of avoiding them rather than figuring out how to defeat them. You’ll hide in closets as a hideous, baby-headed monster passes, tip-toe around straightjacketed mental patients with their eyes sewn shut, or just outrun an axe-wielding doppelganger of yourself, to name a few. If you don’t evade an enemy, you may be diced by a giant-sword-bearing little girl or have your guts ripped out by a doll. But if this happens, Thomas simply wakes up in the nearest bed, which doubles as a checkpoint. Your death turns out to be just another a nightmare, which I found extremely clever. Checkpoints are very frequent, and require little backtracking when you wake up in the nearest bed. In fact, dying is necessary at times – some encounters are unavoidable, and occasionally you’ll find yourself performing reckless actions with no regard for your safety. 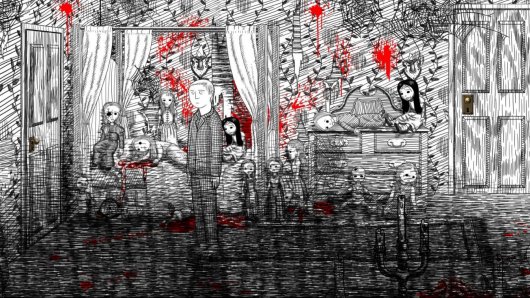 There is a lot of walking in Neverending Nightmares. In fact, that’s primarily all you do, and at times the pacing feels too slow as you wait impatiently for the next subtle scare. I entered every single room I came across, thinking they would hold major significance, when really only about 10% of them are relevant to the progression of a deliberately vague story. Interactive items are extremely few and far between (and typically only allowing you to look but not touch), and story details are doled out only at sparse, predetermined points. Rarely does the environment itself offer any hint at what exactly is happening with Thomas or Gabrielle.

At first all these extra rooms helped establish atmosphere and build suspense, keeping me on my toes in anticipating the next hidden grotesquery or something to jump out at me. But release of that tension came infrequently, and eventually it started feeling excessive and predictable. The assets are also recycled, with the same rooms using the same art over and over again, and even their deepening decay can’t sustain interest throughout. Though the game is short, standing at about three hours with all endings and paths unlocked, I think it actually would have benefitted from being a bit shorter, trimming out some of the redundant rooms and reducing certain hallways. It feels meandering and unnecessary at times, and wasn’t something I looked forward to doing again. 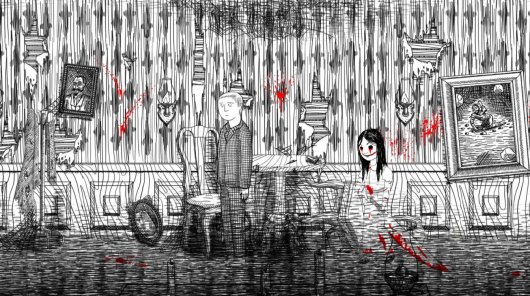 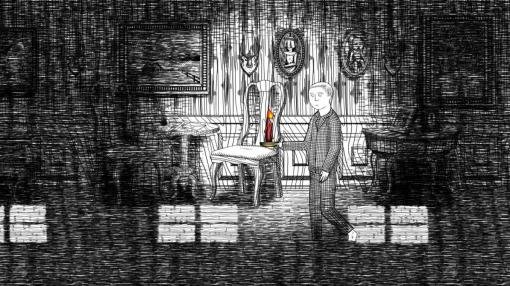 What all this extra real estate does is turn the game into a gigantic maze, and like a rat caught inside, the goal is mainly to find your way out. Not all rooms connect logically to the next, and waking up from a new nightmare usually results in a deteriorating design, if not a reconfigured layout or complete change of scenery. No area is so large that you’re likely to get lost for long, but if there’s one thing that can hold you back, it might be finding the correct path amidst the myriad doors available.

Compounding the matter is that although you can run, the ability lasts only a few seconds. If used for too long, Thomas will become fatigued, begin wheezing, and won’t be able to move until fully catching his breath. It’s clear that Neverending Nightmares was not meant to be rushed through, so limiting the sprint action  makes sense. It also adds to the tension of feeling vulnerable. However, upon playing through certain scenes again to unlock different endings, I couldn’t help but wish to speed through the parts I had already experienced, yet would inevitably have to stop until Thomas caught a second wind.

Neverending Nightmares plays more like an interactive illustrated horror book than a game, but its chilling art and sound design make for a memorably surreal experience.

GAME INFO Neverending Nightmares is an adventure game by Infinitap Games released in 2014 for Mac, PC and Linux. It has a Stylized art style, presented in 2D or 2.5D and is played in a Third-Person perspective.