AR-K: Episode 2 - The Girl Who Wasn’t There review

We get a small commission from any books sold.
All Bitmap Books
Written by
Drummond Doroski — November 4, 2014

A few years ago I reviewed the first episode of a new series called AR-K, a pretty if incredibly unpolished first offering from indie studio Gato Salvaje. Now the Spanish developer has released the next episode of this four-part series, The Girl Who Wasn’t There, and the good news is that there have been some noticeable improvements. The bad news is that the game still contains several notable flaws, both technical and artistic. The real tragedy is that behind all of these flaws, AR-K has all the potential to be a truly intriguing story with some fun characters. There are indications it may get there by episode three, but the series still falls short of the mark with this sophomore offering.

Episode two picks up almost right where the last one left off. Our heroine, Alicia Van Volish, has found the mysterious orb which led to a scandal years before that derailed her chances of attaining her dream job of law enforcement.  The orb remains as unexplained and mysterious as ever, but there are hints it may be connected to a conspiracy of upper-class citizens, one of whom may be the man she bedded the night before. The first episode ended with her meeting this man, named Blaine, once again in a nightclub. Naturally, the second episode begins with her crawling out of his bed.

Alicia spends much of this episode searching for clues about Blaine and his mysterious group, while also trying to pass her Journalism class despite her vindictive teacher’s attempts to fail her. There are three important new characters in this episode, if you include Blaine, and hints that all three are connected to something larger and darker. But hints are really all you get, as each character appears for only one or two quick scenes, and we still have no idea what that “something” might be. Obviously the developers want to save all the big revelations for the next two chapters, but an answer or two would be nice at the halfway point, as by the end of this episode I still felt like I was no closer to understanding anything at all of the overall plot. 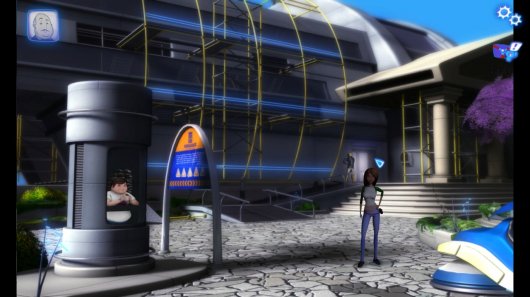 The gameplay remains much the same as before, with a couple of key differences. Each location has a variety of hotspots you can interact with. Left-clicking will do anything from examining an object, talking to another character, or picking up a potentially useful item. Hitting the spacebar or clicking the appropriate icon in the top-right corner of the screen will open up Alicia’s inventory. This time around, the inventory has an extra section where Alicia stores ideas rather than objects. As a hypothetical example, let’s say Alicia comes across a locked door. An icon of the door may appear in this section, allowing you to drag it onto a character you think might be able to help, or you could right-click it to get Alicia’s input. You can also drag it onto the narrator icon to get a hint on how to proceed, though these hints are seldom very helpful.

This brings us to another difference. In an interesting change of style, the second chapter introduces a narrator, a dapper gent who resides in a square at the top-left corner. Unlike most narrators, he is clearly heard by Alicia, who doesn’t seem to appreciate his presence or his comments very much at all. Blatantly breaking the fourth wall, he states that the game designers integrated him as a way to explain Alicia’s actions and thoughts a bit better, and to help make the story less confusing. He doesn’t do either of these tasks very well, but he does provide a good back-and-forth with Alicia, who seldom has anyone else to bounce her comments off.

Alicia’s comments represent another very important change, as they are now voiced by a brand new actress, Ash Sroka. I remember Alicia’s original voice actress being fairly competent, but I also remember the occasional intonation being off, and I felt the formal-sounding British accent clashed a bit with Alicia’s free-spirited style. While her name may not be instantly recognizable, Sroka is best known for voicing Tali in the Mass Effect trilogy, and while Alicia has a ways to go to be as likeable as Tali (one of the most adored aliens in the galaxy), the new direction is definitely an improvement for the character. The developers have also redone the first chapter of AR-K (and changed the title from the original “Sex, Lies, and Classwork” to “Gone with the Sphere”) and have replaced the original voice actress with Sroka, ensuring the voice is now constant throughout the series. While I couldn’t detect any other acting changes in the vocal cast, I didn’t notice any off-sounding lines as I did with the first episode, and the acting throughout is decent this time around, though the subtitles that accompany it still have quite a few typos. 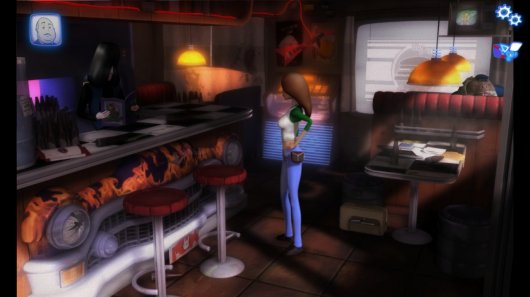 What hasn’t been improved is the gameplay itself, as I found quite a few puzzles to be as frustrating as I did in the first chapter. Towards the beginning of the game I grabbed an object that Alicia described to me, but an hour later I had forgotten her description of it and it looked like no item I had ever seen. The game gives you no way to examine inventory objects, so I couldn’t hear Alicia’s description again, and you can’t start the game over without deleting your current game as there’s inexplicably only one save slot, and it’s an autosave. I literally had no idea what the object was, which naturally made it fairly difficult to solve puzzles with. This almost becomes a theme with the game, as later you manage to retrieve the mysterious orb from chapter one from your overprotective dog. This orb is as mysterious to Alicia as it is to you, yet we’re expected to simply guess its function and use it to solve multiple puzzles. There’s simply no way to figure this out other than clicking the orb on random things. I remember feeling that translation issues might have clouded the puzzles for me in the first episode, but I don’t think that’s the case with this one.

Something I continue to enjoy in this series is its visual design. The characters and backgrounds all have a bright, somewhat cartoonish look to them that makes the world of AR-K feel very alive. The graphics are simple but fun, and everything from Franky’s somewhat cluttered diner to Blaine’s opulent apartment look great. The titular AR-K on which the game is set seems to be a futuristic attempt at a utopian city in space, though its purpose remains something of a mystery so far. Alicia even comments early in the game that “it’s always a good morning on the AR-K”, and the bright, sunny weather certainly shows what she means.  It’s worth noting that you’ll revisit many of the places you saw in episode one, as there are only a handful of new locations in this chapter. Some of the scenes are a little different, like the university now undergoing some renovations, but for the most part there’s a lot of familiar locales. The animations are done in the same cartoonish style, but to a somewhat lesser effect. What makes for decent graphics in the game itself ends up looking a little like cheap computer animation in the cutscenes. 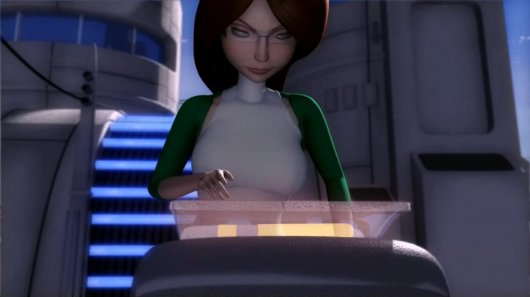 While the characters still badly need to be fleshed out in future installments, I was surprised by how many I remembered, considering how long it’s been since episode one. The villainous Reitherman and the friendly bull Franky especially stuck in my mind from episode one. But despite Alicia’s attractiveness and Ash Sroka’s excellent efforts, I’m still having trouble sympathizing with Ms. Van Volish. I had issues with her apparent lack of morals in the first chapter, which she refers to so casually throughout chapter two that one wonders if she’s even aware she did something most people would consider cruel. In addition to once again injuring her former roommate Nuno (who has moved out specifically to get away from her), she utterly trashes her new beau’s apartment. I guess this is more justifiable, as the guy may be connected to whatever conspiracy ruined her life, but many of her sociopathic acts still feel somewhat unjustified, even with the narrator critiquing her throughout the game.

AR-K continues to be a series I really want to like. I love the visuals, the voice acting is now top-notch, and it presents an intriguing futuristic world as a backdrop. But until the puzzles are improved, the characters are fleshed out, and the narrative really gets going, I still have to recommend waiting on this series. This episode takes around 3-4 hours to complete, but very little actual story drives the action, at least until near the end. One bit of promising news is that the studio has hired Greg Rucka, an acclaimed comic book writer to pen the next two episodes. Sroka states in a voice-over during the end credits that she’s excited about the scripts she’s seeing from him. I’m really hoping she’s not just stating that for PR, because I want to be excited too. AR-K has so much potential, and I would love to see it reach that potential in episode three. But like the girl in this second episode’s title, the series just isn’t there yet.

Episode two is a definite improvement over its predecessor, but the AR-K series still has a ways to go to fulfill its potential.

GAME INFO AR-K: Episode 2 - The Girl Who Wasn’t There is an adventure game by Gato Salvaje released in 2014 for Android, iPad, Mac and PC. It has a Stylized art style, presented in 2D or 2.5D and is played in a Third-Person perspective.

What our readers think of AR-K: Episode 2 - The Girl Who Wasn’t There

A Good Continuation to the Story

The game continues a short while from where episode 1 was left off. Some changes have happened in the surroundings but the protagonist will meet the familiar characters again, and a couple of new ones.... Read the review »