The Vanishing of Ethan Carter review

Adventure games by The Astronauts

We get a small commission from any books sold.
All Bitmap Books
Written by
Astrid Beulink — October 17, 2014

Many modern adventure games are becoming increasingly linear and streamlined, with nothing to discover for ourselves anymore. The Vanishing of Ethan Carter goes in the opposite direction, promising no hand-holding and a world you can freely explore right from the start. And explore you delightedly will, because clues to this paranormal murder mystery can be found anywhere throughout the remote Red Creek Valley, a visual splendor you’ll continually behold in slack-jawed amazement. It’s fairly light on puzzle challenge and a bit of environmental signposting wouldn’t have hurt, but the game’s open-ended approach and surprisingly poignant backstory represent a welcome breath of fresh air, in more ways than one.

The Vanishing of Ethan Carter starts with a brief narration outlining the barest minimum of information before dropping players into the game without any further guidance. From this opening, we learn that Paul Prospero is an occult detective who has received a disturbing letter from a youth named Ethan Carter and fears that something bad has happened to the child. Prospero decides to investigate how such a young boy could have knowledge of the things he described, though somehow he knows it'll be his last case.

The investigation starts in a forest near some train tracks. From a first-person perspective, you have almost total freedom to explore the immediate surroundings using the traditional WASD keyboard/mouse combination. You can either follow the tracks or wander off into the woods, but it pays to get off the beaten path, as you will miss many clues if you keep to the obvious routes. In the woods around the starting area, for instance, you will come across a series of traps that are sprung as soon as you come near them (they won't hurt you). Click-holding on them to 'inspect' will reveal a partial image that fills in more completely with each new trap you've triggered. Once you've found them all, the picture is complete, revealing a kind of ethereal memory world that you can investigate further. 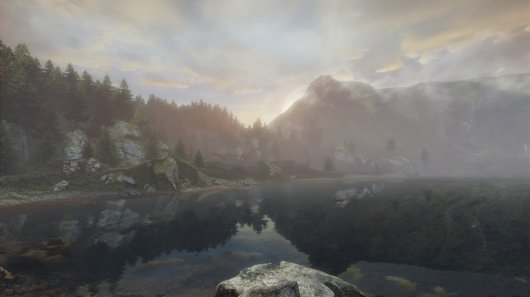 In trying to uncover what happened to Ethan, you'll explore a rundown village, a graveyard, a dam, and a mine sprinkled throughout the mountainous, forest-bedecked valley. The full 3D locations look absolutely stunning in the eternal twilight, and you will often find yourself pausing from your trek through the country just to stare at a lake reflecting the foliage or the butterflies fluttering around. Indie developers The Astronauts used the Unreal Engine and a special visual technique using thousands of photographs of real trees and rocks. They've done a great job, as no area looks alike and the changing landscape always feels totally natural. Better still, there are no load screens causing artificial interruptions along the way.

Although this is a breathtakingly beautiful game, it has plenty of scenes that aren't so pretty to look at. Throughout his investigation, Paul discovers many a mutilated corpse, such as a guy whose legs have been severed from his torso. The gore is very real and yet never overdone, as the goal is not to gross players out but to suitably convey the shocking horror of the mystery, which continually ramps up both your desire to find Ethan and the dreadful suspicion that when you do, it may be too late.

The juxtaposition between the serene, pastoral landscape and the gruesome horrors you uncover makes for an almost palpably unnerving atmosphere. For the most part there is no actual danger to Prospero, but a growing sense of supernatural malevolence is enough to evoke fear as you progress, as well as sadness at the tragedies you encounter. Bit by bit, the sparse but immersive backstory reveals just enough to make you want to constantly discover more. You’ll gradually learn all about an ancient curse that threatened to tear a family apart, but saying anything more would spoil the experience. 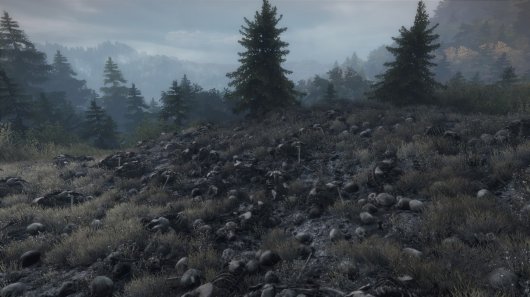 Much of this huge, open world has nothing at all to interact with, but scattered around the environment are small set pieces that represent significant new parts of the mystery. Within these scenarios, looking at certain objects causes Paul's thoughts to be visualized as words on the screen, such as ropes, a rock and the crank that belongs to the train. Some items can be interacted with directly, while others provide visual hints for tracking down other crucial details. A few objects can be collected as inventory, though these are used automatically in the correct situations later on. The objective is to recreate each scene as it was during the incident (was it an accident or murder?). When you’ve accomplished that, clusters of light appear and turn into ghostly holograms of the characters involved. Your task is to 'tag' these people in the chronological order the scene originally played out, using observational skills and imagination (or even guesswork in a pinch).

Once you are satisfied you've found the correct sequence, you can visually re-enact it as an animation shows how it happened in all its grisly detail. If you've made a mistake with the order, the cutscene will peter out after the last correct one so you can amend the tags. It's not hard to intuitively figure out that a person without a hammer needs to be placed before that same person with a hammer in his hand, so these puzzles are on the easy side, but it is an interesting approach to gameplay, as you literally feel like you are piecing together a series of mysteries. 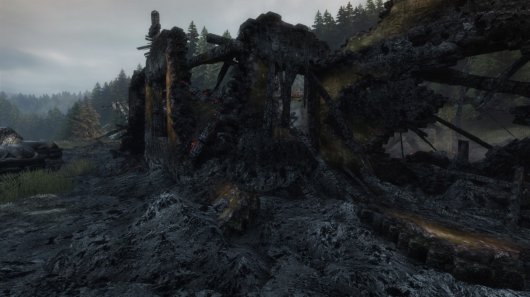 There is a much more complex, clever puzzle that involves recreating the layout of a house to find a secret room, but otherwise there aren't many challenges here. The other exception is a small mine maze with a couple of patrolling ghosts that need to be avoided (which isn’t hard once you've figured out what to look for) while seeking out all the dead bodies that carry clues to a cryptic symbol puzzle. Besides that, there is only one other sequence requiring a bit of dexterity, as you must follow someone through the woods while he constantly teleports himself ahead, and it’s very easy to lose him. Even there, however, the challenge isn’t one of reflexes, just finding him in the lush wilderness.

With gorgeous graphics, full freedom to explore, and interesting gameplay, The Vanishing of Ethan Carter sounds like a great game, but there are a few things that stand in its way of becoming an instant classic. First of all, there is the save system. The game autosaves after you've successfully solved a mystery, so if you've been roaming around and partially solving other puzzles without fully completing them, you will lose all that progress when you start the game again. This might work fine in other games, but for an adventure where vast amounts of terrain can be traversed and major chunks of time can pass between major accomplishments, manual saves would be extremely beneficial, or at least autosave checkpoints that are much more readily accessible. Since time of release, the game has been updated to be a little more save-friendly, but it still pales in comparison with manual saving or frequent checkpoints.

Another quibble is that because the world is so open-ended and you don't get any direction (the game isn't kidding about not holding your hand), it's very easy to miss something vital that you don’t even know exists. You really need to explore thoroughly to see everything, no matter how remote. Once you stumble upon one of the interactive sequences, all items related to that particular mystery are quite close, but with no map to help you get your bearings or allow quick travel, if you wander too far off you may have to backtrack to find the scenario you were working on again. At one point the path behind you is closed down, so if necessary you'll have to find an alternate avenue to return to where you were previously. 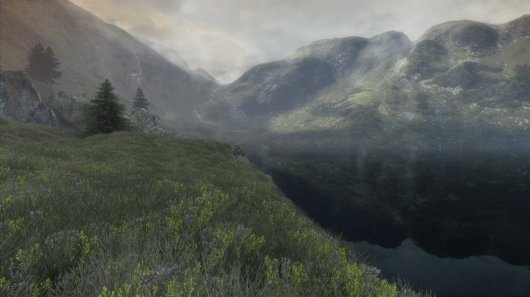 And it may be necessary. Although The Vanishing of Ethan Carter is largely non-linear, you can actually reach the endgame location only to be told the story can’t be resolved yet. Fortunately, there is an interactive chalk map on a wall that will teleport you to any mysteries you have missed. Strangely, it seems you can bypass some things and not others, as I ran past the first dead body on purpose on my second playthrough yet was able to finish the game.

Paul sometimes speaks his thoughts out loud in a deep, grizzled voice that suits his role, though he never shows much emotion – in fact, he never reacts at all to the emotionally disturbing scenes he encounters, leaving it up to the player to experience those first-hand. The other characters speak only during the re-enactment scenes, but everyone delivers a convincing emotional performance, and even the children sound like real children instead adults impersonating one. The music is sparse and forgettable, but the ambient effects are spot on, from chirping birds in the forest areas to creaking beams or floorboards inside.

Easily one of the most graphically impressive games, The Vanishing of Ethan Carter offers several hours of enjoyable gameplay as well. Gradually piecing together bits of evidence and sorting the order of tragic events is an intriguing way to approach a mystery and serves as compelling motivation throughout, although it’s not very challenging and the lack of manual (or more frequent) saves is a major letdown. The game succeeds in creating an emotional connection with the missing boy even in his absence, and is guaranteed to make you think about the fates of both Ethan and Paul long after you've finished. If you are into narrative experiences with lots of exploring and a thought-provoking backstory driving the action, you will definitely enjoy The Vanishing of Ethan Carter.

Though it poses little in the way of challenge, The Vanishing of Ethan Carter delivers a gripping, gradually unfolding tragedy set in a beautiful open woodland environment that you are free to explore at will.

GAME INFO The Vanishing of Ethan Carter is an adventure game by The Astronauts released in 2014 for PC, PlayStation 4 and Xbox One. It has a Illustrated realism style, presented in Realtime 3D and is played in a First-Person perspective. You can download The Vanishing of Ethan Carter from: We get a small commission from any game you buy through these links.
The Good:
The Bad:
The Good:
The Bad:

What our readers think of The Vanishing of Ethan Carter

Figuring out how the interface is supposed to work and placing events in the right order are not very funny despite gorgeous graphics. Read the review »

The dead do lie

The game has been patched a couple of times

The game itself might not have been perfect at release, especially the save system, but the patches released shortly afterwards took care of that and several other glitches. The game experience is unique and rewarding... Read the review »