Review for The Stanley Parable

We get a small commission from any books sold.
Written by
Drummond Doroski — December 13, 2013

Video game characters often lead such crazy lives that one wonders just how self-aware they are. Does King Graham question why he sets out on such dangerous quests without taking along a weapon? Does Atrus ever ponder why this stranger wandering around his worlds never says a word? Does Guybrush Threepwood realize that he got his name simply because of how ridiculous it sounds? Movies have toyed with this concept a little, with titles such as Stranger than Fiction, The Last Action Hero, and The Truman Show, but games have rarely delved any deeper than the odd fourth-wall-breaking wisecrack. The Stanley Parable was originally a free mod that playfully toyed with the concept of reality for video game characters and has recently been expanded and remastered. What was once a simple exploration has been greatly enhanced, and while it’s hard to think of the final product as a “game” in the strictest sense, it’s an amazing artistic exploration for people who like story-driven experiences.

The Stanley Parable begins by introducing the titular hero, an office drone who literally pushes the buttons he is told to push, yet is somehow content doing so. Upon realizing that his instructions have suddenly stopped, Stanley emerges from his office to discover that all of his co-workers have vanished, leaving him alone in an empty office building with nobody to tell him what to do next. Nobody, that is, except a narrator. But as the narration describes Stanley’s next actions before he performs them, it’s almost impossible to resist the urge to contradict them. As you move Stanley down a hall in front of two open doors, the narrator tells you how Stanley will proceed through the door on the left. I’m curious how many players did as I did on their first playthrough and entered the door on the right instead. I’m guessing it’s well above 50%.

I simply can't talk too much about plot details in The Stanley Parable, because the great fun of the game is experiencing it for yourself. There are many different paths and different endings to be found, and discovering them on your own is the best way to take it all in, though a couple of the “endings” are so tricky I had to go to YouTube to see them (one involves pushing buttons for literally four hours). Most playthroughs take somewhere between ten and fifteen minutes, sometimes less, so searching for the differences doesn’t take too long. Sometimes the paths are obvious, such as choosing which door to go through. Sometimes they’re a little more hidden, and you’ll have to pick up cues from the area around you to find another route or choice to make. And sometimes making no choice at all is, in fact, a valid choice. 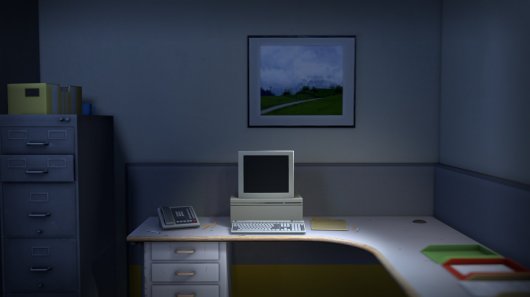 The interface is as simple as it gets. The game is set up like a standard 3D action game, as you see through Stanley’s eyes and control where he looks with the mouse and move him with the WASD keys. You can crouch (but are virtually never required to) and press buttons or open and close doors with the left mouse button. That’s pretty much it. There are no enemies to fight, and it’s hard to say there are any puzzles to solve, though finding an obscure path through the game brings the same sort of satisfaction that solving puzzles often does.

As simple as the interface may be, the game itself is anything but. It’s hard to say if there’s an overall point to the whole experience, as the tone shifts considerably depending on which path you take. Sometimes the narrator is a benevolent entity, guiding you towards a happy ending. Other times he’s a sadistic jerk, modifying the world around you to trap you or even kill you. Still other times he seems to realize that even he is a character in this story, and doesn’t have nearly as much influence over it as he originally assumed. The game even acknowledges these kinds of changes. At one point the narrator tells you what happened to your missing co-workers, but is sure to add that “that’s only what happened in this version of the story.”

Listening to the narrator try to fit Stanley’s actions into the overall tale, even when they contradict it, is one of the best parts of the game. At some points he becomes so exasperated by Stanley that he even talks directly to him, begging him to be more reasonable. While Stanley himself never says a word, the actions you take are still ways of communicating with the narrator, and these interactions get downright fascinating at times. On one occasion the narrator accused me of doing something simply to see what he would say if I did it – which amused me because he was dead on. In fact, most of my actions were motivated by seeing if I could get the narrator to comment on it. 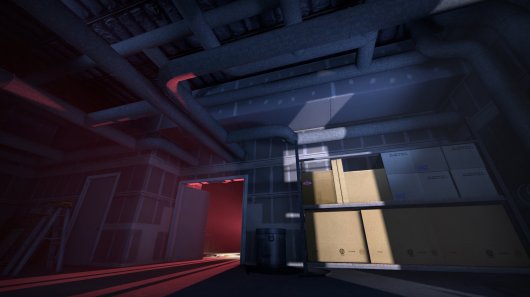 This brings up one of the greatest strengths of the game. The voice acting for the narrator, delivered by Kevan Brighting, is exceptional. One of the game's creators reportedly said Brighting is “half the reason this game has been successful”, and it’s hard to argue with that statement. While there are one or two other voices in the game, the experience is essentially carried by him alone, much the way Ellen McLain carried Portal with her portrayal of GLaDOS. It’s a fitting comparison because, while The Stanley Parable does occasionally get rather dark and serious, I don’t think I’ve laughed out loud at a game so much since the Portal series. Brighting’s crisp, British voice is a perfect match for one of the cleverest scripts in recent memory.

The rest of the audio is excellent as well; there’s just not much of it. The game begins with a little bit of music to set a mysterious tone, but after that it’s oddly silent, save for Brighting’s ever-present commentary. There are a handful of other songs to be heard, but only at very specific times and often for humor’s sake, such as when the narrator plays some “soothing jazz” when Stanley tries to get ahead of the story. Sound effects occur with the same high quality and the same degree of scarcity. A ringing phone, a beeping button, and an opening door all have convincing noises to accompany them, but there are only so many things in Stanley’s office that make noise.

Visually the game is a bit on the drab side. The Source Engine is showing its age, and despite the considerable leap in detail from the last iteration of The Stanley Parable, it’s still not the most detailed rendering out there. The graphics don’t look bad, just simple, but this is definitely not a game that cares about looking pretty. The basic design of Stanley’s workplace neatly ties into the theme of the game, so the aesthetic could be as much a stylistic choice as it is about budget issues. 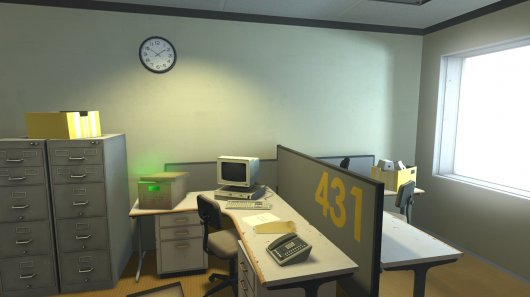 It should be noted that The Stanley Parable is clearly meant to be played as much as possible in a single sitting. Some things in the office building only seem to happen on multiple playthroughs. Sometimes the changes will be simple, like the office looking just a little bit different or having papers scattered all over the floor. Other times the changes will be more overt, and may in fact be a continuation of the path you were on previously. Some doors that were previously locked are now able to be opened. There was even one choice I made on a couple of playthroughs that annoyed the narrator so much he blocked me from making it in the future. The game fully expects and allows for you to occasionally restart it, and often restarts itself automatically when you reach an ending. Even the dialogue changes slightly on multiple playthroughs, making playing the same sections through again considerably less tedious, though you should still expect a fair amount of repetition along the way.

The Stanley Parable is not a game for everyone, as it can hardly be called a game at all. There's really nothing in the way of challenge encountered here, so if the idea of deconstructing video game flow and narrative tropes in bite-sized chunks doesn’t appeal to you, it would be best to give this one a miss. But for those who like clever writing and turning the notion of storytelling control in gaming on its head, this is a must-buy. The launch price might be a little steep given that most of the content can be experienced in just a couple of hours, but if you believe in quality over quantity, this is thoroughly fair value. Whether you grab it now or wait for a sale, I do recommend grabbing The Stanley Parable when you can. Experiences like this are all too rare.

The Stanley Parable is available at: 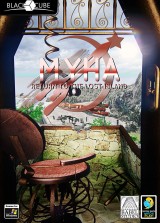