We get a small commission from any books sold.
All Bitmap Books
Written by
Randall Rigdon — December 6, 2013

Imagine a society where censorship has run rampant. A totalitarian regime reigns with tyrannical control and routinely monitors, limits, and sanitizes all forms of the public’s communication through a specialized "Department of Communication". Free thinking and subjective forms of self-expression are deemed criminal offensives and anyone caught exhibiting such dastardly deeds is subject to penalty. Breaking loose from such inhumane impediments is futile, but a rising underground movement of non-conformers has seemingly found a creative and risky way around the insanity.

The premise behind Neven Mrgan's and James Moore’s compelling iOS adventure Blackbar is immediately evocative of George Orwell’s Nineteen Eighty-Four, as well a number of similarly iconic, politically-charged science fiction novels. In fact, given that Blackbar is essentially a work of interactive fiction, the experience feels rather like playing through a hands-on version of Orwell's classic. But while the story content itself comes across as fairly derivative and commonplace, its absorbing format and unique presentation make for an intensely captivating experience. 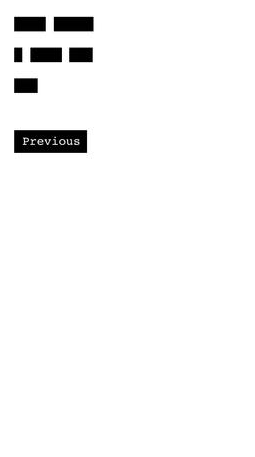 At first glance, Blackbar might appear to be much like a traditional '80s text adventure. The reality, however, is that its innovative approach ends up providing a gaming experience that is actually quite removed from traditional conventions. Rather than guiding the story forward through your own actions in the world, it's your job to decode what is going on in the world around you that others would try to prevent you from knowing.

The game begins literally as soon as you open the app. Instantly you are shown a letter from an acquaintance who has received a new job at the department. The first and foremost catch to this and subsequent letters you receive is that certain lines and words have been blacked out. Here’s where the gameplay lies, as it becomes apparent that your role is to fill in the words that have been censored to complete and transcribe the rest of the story.

Doing so simply involves tapping on the blacked out segments to cause the iOS keyboard to appear. Type in a word that makes sense in context and if you're correct, the segment highlights yellow. When all of the words are correctly filled in, a prompt for the next letter appears... and this formula essentially continues for the rest of the game with little variation. In terms of an interactive narrative experience, this makes for an often engaging and creative way to let players unravel the story for themselves. In terms of gameplay, however, Blackbar comes off more as an unconventional game of Mad Libs rather than a fully integrated adventure experience. 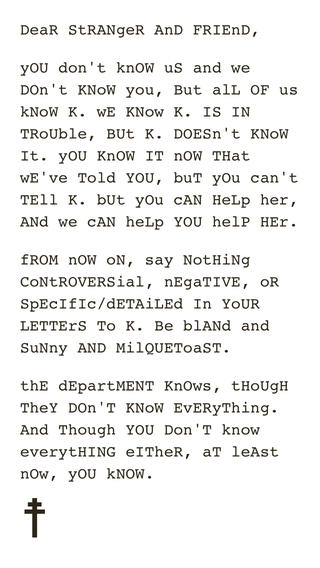 A large part of this feeling is driven by the fact that most of the solutions rely on guesswork. Rather than offering interpretive or diverse solutions to the puzzles at hand, you’re simply tasked with plugging in words until the right one fits. Occasionally the solution can be found through subtleties and context clues in the letters, sometimes Googling a specific word or phrase in the letter will reveal a deeper piece to the puzzle, and one challenge in particular requires plugging in words to a nursery rhyme. Puzzles like these, however, are very few-and-far-in-between, as most of the time trial-and-error is the only available method. Frankly, this created some frustrating moments and left me yearning for more substantial gameplay elements to break up the repetition.

That doesn't happen, unfortunately. The game sticks true to this form the whole way through, as reconstructing censored letters doesn’t really allow much in the way of other gameplay variations. The bare-bones nature of this design is also devoid of any visual or audio flair, though even a single layer of music would have worked nicely without hampering any of the original intent. The very, very last screen is the first and only instance of any true graphical component, featuring a photograph that slowly blossoms into a colorful splendor. Unfortunately, seeing such a display only furthered the sense that the rest of the game would have vastly benefited from comparable visual and auditory inclusions. 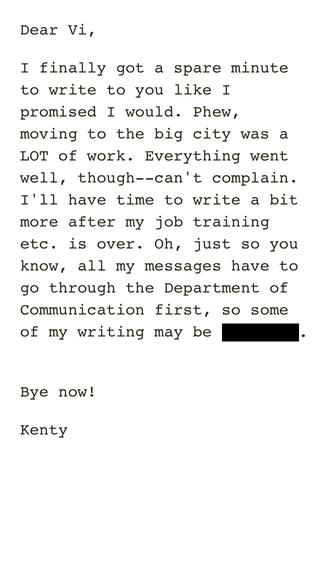 As a text adventure, thankfully Blackbar excels in its actual narrative. The story progresses in a fairly engrossing manner, only revealed as you slowly unfold the story for yourself. Without spoiling too much, it's safe to say that the letters you receive begin to extend beyond your lone acquaintance, as you start receiving warning messages from the department, and even stranger, cryptic messages from an organization that’s out to seek the truth. Your initial acquaintance even goes through a series of identities throughout the story and manages to communicate through all of the above entities in some form. The story is really more about your acquaintance’s life than your own, as you could be pretty much anybody just checking the mail each day while drinking your morning coffee.

None of your of actions ever really play any direct role in the actual backstory, as filling in words solely functions as your means of moving onto the next letter. However as the story becomes more complex and intense in its own right, you'll feel all the more compelled to push forward through the elusive tale, as sometimes a key plot twist isn’t revealed until you've solved enough letters. I felt this most significantly towards the end, when the revelation of two particular words tied the story together and actually managed to move me emotionally. It was at this point I realized how engaged I was with the story, and how effective its presentation was in making the tale seem something more than it would have been if told more conventionally. The actual process of solving the letters failed to go through the same level of transformation, unfortunately, as Blackbar’s gameplay mostly remains identical throughout.

Ultimately, if you’re looking for a poly sci homage with some light social commentary reminiscent of George Orwell, Philip K. Dick, or even Ayn Rand, Blackbar offers readers a unique means of experiencing some otherwise familiar material. As an interactive fiction piece it's a refreshing approach, though it's highly streamlined and relies on a single gameplay mechanic that can become both tedious and frustrating at times. As a mobile adventure, however, this makes it well suited for playing in short bursts that can satisfy you for a good week or two. You'll want to have a firm grasp of the English language to try it, but it's certainly the most innovative interactive reading experience in a long time. It’s only fair to say that in an alternate reality where censorship indeed is running rampant, Blackbar would be                                     for           to          .

The unique Mad Libs-style text presentation of Blackbar’s sci-fi social commentary is certainly engaging, but it works better as an innovative reading experience rather than a fully-realized adventure game.

GAME INFO Blackbar is an adventure game by Neven Mrgan & James Moore released in 2013 for iPad. It has a style, presented in Text Only and is played in a perspective.

What our readers think of Blackbar