We get a small commission from any books sold.
All Bitmap Books
Written by
Randall Rigdon — December 16, 2013

With its latest offering, indie developer Fire Maple Games provides a varying experience for the ever-evolving mobile consumer. As an on-the-fly adventure, The Lost City is a satisfying supplement for the hurried gamer looking for a light but heartfelt tribute to the golden Myst era of first-person adventuring. However, amongst the currently thriving movement toward richer and more substantial, innovative iPhone titles, the game fails to separate itself from the pack by providing something that truly resonates before reaching its sudden and unfulfilling end.

At first glance, The Lost City's visual presentation looks extremely pleasing. As many a first-person adventure has recognized in the past, the beauty and immersiveness of the setting is arguably the most significant part of its whole. This game doesn't once falter in that regard, providing a vibrant, tropical environment to explore. Through a distinct mixture of photorealistic and vibrantly cartoony imagery, The Lost City presents a world that is delightfully reminiscent of a heartfelt Indiana Jones tribute, albeit at a much more leisurely pace. A relaxingly beautiful, full-motion waterfall, a hidden treehouse with a gorgeously stunning view, and a calming pond filled with brightly colored fish are just a few of the many sights you can find amongst the hidden tombs and corridors that mainly encompass this adventure.

How these visuals are achieved from a technical standpoint, however, feels somewhat limited. All the lovely imagery is unfortunately hampered by low resolution, certainly far from utilizing any sort of iPhone retina display or HD capability. While artistically the sights are to be commended, they’re often presented in a static slideshow quality. An attempt to offset this flat, lifeless nature usually occurs through an animated overlay of rain or fog or something of the sort, superimposed over each screen. 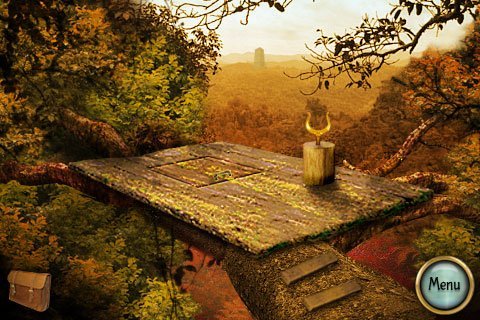 Occasionally, however, a creative and enticing animation will actually display, which further adds to the regret that the rest of the game isn’t similarly embellished with such moments. For example, one puzzle solution results in a simplistic yet striking animation of a bunch of rocks supernaturally emerging from a canyon to construct an ancient stone bridge. It was so refreshingly unexpected that my disappointment was heightened when the reward for the very next puzzle was just an already typical animation of a hidden door sliding open.

As its title implies, The Lost City is a world to easily get lost in... literally. Not even after completing the game twice did I ever have a full sense of where everything was. The nearly maze-like navigation is ultimately this game's biggest fault. Often a screen will provide you with three routes to choose from, resulting in yet another three random routes. It becomes a huge hassle figuring out which path you're trying to follow through, especially since the whole game relies on backtracking. Even the “map” provided is practically useless, revealing a string of numbered images that is an absolute pain to scroll through. Thankfully, the world itself is small enough so that the confusing navigation doesn't render the game completely unmanageable.

The small world actually allows for The Lost City's most creative element to function fluidly. Early on you discover a supernatural way to change the seasons at will, which subsequently alters the entire environment. The visual transformations involved are impressive and well-executed, and as a gameplay mechanic it's vaguely similar to the legendary traveling-through-time puzzling of Day of the Tentacle. None of the challenges here are as clever as getting George Washington to cut down a youngling cherry tree to remove a full-grown tree in the future, but you get a similar sense of satisfaction when you change the seasonal elements to traverse an otherwise uncrossable river. 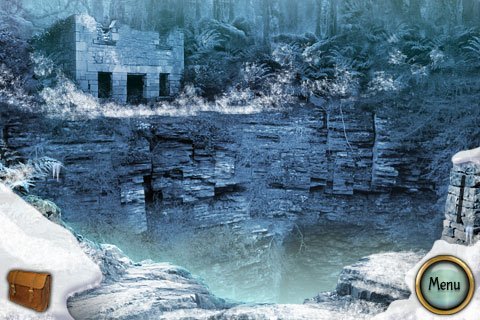 A musical switch in the seasonal changes would have contributed to a more immersive experience, however, as just one constant and seemingly endless piece of music plays through the entire game. Fortunately, the soundtrack works well as a backdrop and I never could determine where the loop started and ended, as just the one piece had a number of varying movements. A bigger omission is the lack of ambient background noise and voices, as the game offers none. When an action is completed, the expected corresponding sound effect will trigger, such as a shovel creating a digging sound, but in terms actually of establishing an atmospheric tone and atmosphere with sound, The Lost City leaves much, much more to be desired.

You've come to explore this lost city your grandmother used to visit when she was younger thanks to a map she recently imparted to you. With this backstory I was expecting to find a buried treasure or a deep, dark hidden secret, but the game really never has you find much of anything that I assume your grandmother hadn't already found herself. You could just as easily have been playing as the grandmother on her original journey, unless she's the one responsible for laying out all the puzzles for you on this quest in some sort of unspoken plot twist.

Such a twist would have actually better explained the scavenger hunt nature of the puzzles. In this non-linear open world, you frequently approach puzzles that, once solved, result in a clue that will help solve another puzzle elsewhere, which then yields yet another clue to another puzzle… and so on. This process continues further and further until the game finally finishes in an abrupt and easily obtainable ending. The entire "lost city" is seemingly built around these obstacles, and obviously a suspension of disbelief is in order to think an entire civilization was built around catering to a lone explorer on a festive adventure eons after its demise. Whereas a title like Riven famously featured puzzles that cohered to the culture and history of its multifaceted world, no such narrative integration is provided in The Lost City. 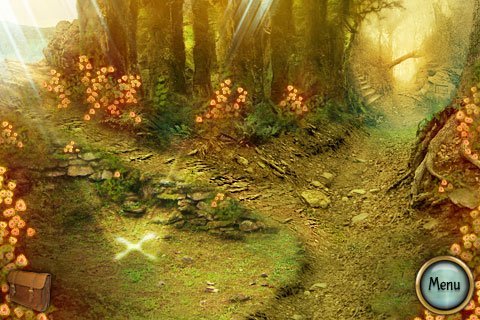 The puzzles themselves, however, are quite intuitive. They're all inventory-based and the touch interface is exceptionally smooth. Tap an item, tap where to use it, done. The scenarios offer a fair amount of variety, ranging from the most obvious means of reaching the bottom of a hidden cavern, to figuring out how to trigger a distant button from afar. One of my favorite conveniences in The Lost City was that whenever a hidden code or symbol was revealed for later use, the journal would automatically open and write the sequence down, instantly eliminating the need to grab your own pen and paper. A hint guide is also included, but The Lost City is just challenging enough but never so difficult that you'll have you rely on it. I did check it out though, and its hints are pretty strong without ever revealing too much.

Ultimately, instead of capitalizing on an opportunity to provide an in-depth and vividly intensive Myst-like experience that iOS platforms (as well as Android and Kindle devices) have the potential to offer, The Lost City chooses to skim on detail and depth to provide a fairly streamlined adventure with plenty of maze-like backtracking. It's mindlessly fun enough to sink a couple of hours of time into, but the basis for a fuller adventure still remains hidden somewhere within this lost city.

The Lost City is a swift, undemanding adventure that chooses to parade as relaxed mobile entertainment, rather than capitalizing on its potential to be a more memorable adventure gaming experience.

GAME INFO The Lost City is an adventure game by Fire Maple Games released in 2012 for Android and iPad. It has a Illustrated realism style, presented in Slideshow and is played in a First-Person perspective.

What our readers think of The Lost City