Review for The Raven: Legacy of a Master Thief - Chapter Two: Ancestry of Lies

Note: This review (paragraph 2) contains a minor spoiler about the ending of Chapter 1.

Last month I was thoroughly charmed by Constable Anton Zellner, the portly protagonist of KING Art’s The Raven: Legacy of a Master Thief. He was a breath of fresh air amidst a genre of other more generic heroes. The first chapter of the mystery trilogy offered a strong investigative story full of interesting characters, brought to life by fabulous voice work and an orchestral soundtrack. Although these elements remain in the follow up instalment, Ancestry of Lies, they don’t piece together quite as satisfyingly and fail to take advantage of what was originally so captivating. It’s still fun enough while it lasts, to be sure, but it’s short, lacks depth and doesn’t offer many new locations to explore, making it a rather unrewarding middle episode that feels very much like filler.

Ancestry of Lies begins right where The Eye of the Sphinx left off, with Zellner having been drugged aboard a cruise ship bound for Egypt and struggling to come to terms with what he’s discovered. It’s a well presented opening sequence, with blurry, slow motion visuals and voices fading in and out to effectively convey the effects of chloroform. After recovering, the other passengers gather and listen to Zellner retell the story so far by going over his evidence through dialogue options. It’s a neat way of getting you back up to scratch, just in case you’d forgotten the details of the case since last time.

Although both scenes work fine here, the sequence in the hospital ward should have occurred at the end of the first episode, which would have provided a much more satisfying and less abrupt cliffhanger. The recapping of events would have been a natural beginning for the second episode, and it’s odd that the decision wasn’t made to make it so. And indeed, whoever was responsible for serializing this adventure into three distinct parts still hasn't learned their lesson, as this game ends extremely suddenly as well, without a natural close. If you haven’t played any of The Raven yet, at this point the story would probably be more effective if you wait another month and play all three chapters as a whole. 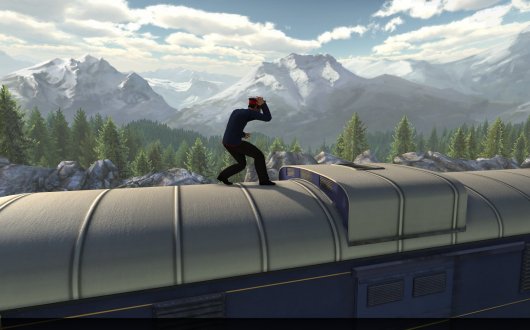 The first two-thirds of the gameplay takes place in Cairo at the museum where the precious Eye of the Sphinx gem is being showcased, allowing players to explore the exhibits and discover the secrets that lay within the museum walls. The building is nicely designed, with high ceilings and stone pillars adding to the sense of grand scope. The museum hall is very large and full of optional hotspots that let you to examine the Egyptian wonders on show and get a history lesson at the same time. The use of light is impressive throughout, with spotlights creating some dramatic shadows and dust kicking up from fresh rubble. A neat touch is how all the dialogue echoes slightly while inside. There is still some environmental restriction, in that this is clearly a huge building of which you’re only allowed to explore a smaller part, but what you do see is well done.

There were times when I wished the camera was a little more fluid, however, especially in the exhibit hall. The perspective here is fixed high above, which not only disconnects you slightly from the action, but I also found it hard to spot Lady Westmacott at one point when she was seated. Although the view does zoom in closer when conversation takes place, it would have been nice to see some alternative angles as Zellner moves around, just to make exploration feel a little more tangible and to make his discoveries clearer.

As you can imagine, the Eye exhibit doesn’t turn out according to plan, going badly awry even before it’s opened to the public. With Inspector Legrand out on errand, Zellner reluctantly teams up with the English bobby to make top to tail of the events that unfold. Albeit brief, the back-and-forth repartee between the pair is amusing, offering a nice change of pace from the uptight Inspector. You’re also introduced to the museum’s owner, a friendly enough chap who is keen for everything to run as smoothly as possible and crumbles when it doesn’t. 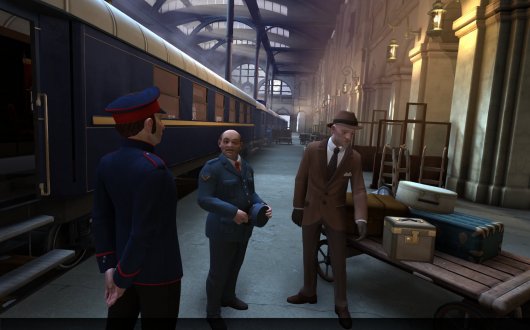 You'll discover who the Raven actually is (supposedly), but the reveal isn’t particularly strong. Having barely had any interaction with the character beforehand, the impact of the revelation is weak. Perhaps more will be explained in the final chapter, but as it stands the big unveiling isn't a dramatically satisfying pay-off for the build-up so far. Not only that, but it’s extremely disappointing how little conversation you engage in throughout. I loved how the first episode introduced an eclectic mix of characters, allowing you to spend time with each of them in turn, but here you have mere minutes with most. Zellner is still enjoyable to play, as witty and personable as before, yet the others' personal stories aren't fleshed out much, which was what was so enjoyable before. Nevertheless, the central mystery is still interesting: the struggling Inspector battling wits with the legendary thief he thought dead; Zellner keen to prove himself by exposing the secrets hidden within the museum. There's more to the museum than first appears, leaving you to investigate deeper and connect your new discoveries to the Raven’s illicit activities.

The latter section of the game is from the point of view of the villain’s sidekick, taking you right back to the beginning of the first episode, on board the train as the mountains whizz by. Although the character you play ultimately has bad intentions, you aren’t particularly malicious towards the passengers. Your voice is light and you're actually pretty likeable. It helps make this person easier to relate to for the player, but perhaps making him/her a bit more cruel or malevolent would have provided a starker contrast to Zellner.

It’s interesting to see the same events from a different angle and solve some unanswered questions. The trouble is, I found it disappointing to be back on the train again, which feels a bit like a cheap recycling of locations. You exchange minimal words with anyone, which is a shame, although it makes narrative sense not to draw undue attention to yourself. The puzzles here (and in the museum) remain relatively simple, but I didn’t have an issue with that. Finding ways to complete tasks aboard the locomotive while going unnoticed is quite fun, even raising a smile when Zellner’s path crosses yours. 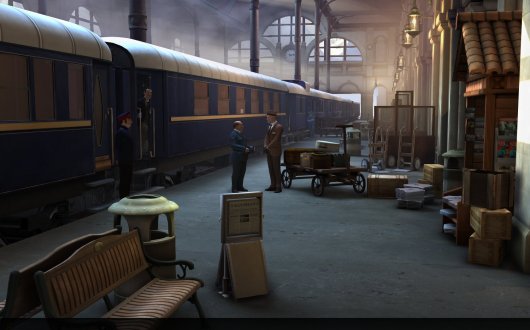 As with the first episode, the majority of puzzles are made up of using items in your inventory or from your immediate surroundings, sometimes combining them into a new object, whether to wedge open a security door or climb down a deep hole, for example. There’s actually a distinct lack of puzzles in Zellner’s section, the plot being advanced largely by stumbling across people and talking to them briefly before moving on again. There is one puzzle which involves setting some picture dials in the right order, but this is clumsily handled: examining nearby objects in the environment, all lined up in a row, then solving it simply by following the descriptions Zellner provides is simple and uninspired. The criminal’s section is more stimulating, like figuring out how to get onto the roof of the train or remove an air vent.

The music is once again brilliant, but most if not all are simply reused tracks from the previous episode. The soundtrack was one of the standout features originally, so it isn’t bad to hear them again, but it would have been nice to have some Egyptian-inspired tunes for the museum. There are a few instances where the score does not match up tonally with what is taking place on screen, like mellow music playing over a dramatic scene, which temporarily drew me out of the moment, so again it would have been better to have some new compositions.

Like before, the occasional technical issue persists that should have been fixed before release. There are a few oddities like unintended awkward pauses in conversation and some animations that lack proper sound effects. Certain hotspots are also misaligned and combining items in your inventory can even cause you to teleport to a different room without reason. There's nothing that ruins the game, but these are all things that are both obvious and preventable. 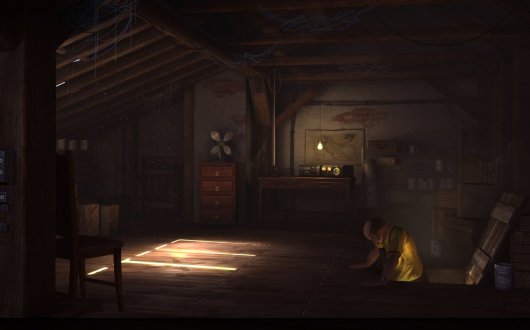 At just over three hours, this is a very short episode, especially when compared to the first, which ran over double the length. The play time would perhaps be forgivable if the content made up for the limitation, but as it stands it's simply another knock against the game. When all said and done, however, Ancestry of Lies is still a reasonably fun diversion. Zellner remains a likeable, offbeat protagonist, the museum looks great and the voice acting is once again brilliant. The characters, for what little time you spend with them, are intriguing and the plot continues to be interesting. If this episode were the middle part of a complete game, you'd probably excuse it as a lull between a engaging opening act and what will presumably be a dramatic finale. But the fact that it’s been released as a bite-sized episode only serves to highlight its weaknesses instead. Here’s hoping the final chapter will raise the stakes once again for the big finish The Raven deserves.

Since time of writing, this game has been re-released in a graphically-enhanced "Remastered" edition. This review deals only with the original release.

WHERE CAN I DOWNLOAD The Raven: Legacy of a Master Thief - Chapter Two: Ancestry of Lies

The Raven: Legacy of a Master Thief - Chapter Two: Ancestry of Lies is available at:

The story of The Raven continues to entertain, but the second chapter fails to reach the heights of the first, with a much shorter run time and a detour from what made the opening chapter so good.

GAME INFO The Raven: Legacy of a Master Thief - Chapter Two: Ancestry of Lies is an adventure game by KING Art Games released in 2013 for Linux, Mac, PC, PlayStation 3 and Xbox 360. It has a Illustrated realism style, presented in Realtime 3D and is played in a Third-Person perspective.