continue reading below
»   Home  /  Articles  / Reviews  / Jacob Jones and the Bigfoot Mystery: Episode 1 - A Bump in the Night review

Jacob Jones and the Bigfoot Mystery: Episode 1 - A Bump in the Night review

Jacob Jones and the Bigfoot Mystery: Episode 1 – A Bump in the Night

We get a small commission from any books sold.
All Bitmap Books
Written by
Jason L Blair — June 19, 2013

With its first foray into adventure gaming, Jacob Jones and the Bigfoot Mystery, Lucid Games mixes the tried-and-true formula of the Professor Layton series with the bite-sized delivery of episodic games. While it could use a bit more gameplay in its adventuring at times, this handheld exclusive is definitely worth playing, as it's served up in a cute-as-a-button wrapper full of humor, fun characters, and an original setting.

I considered whether I should start this review off with a direct comparison to Layton, but the fact is that if you know how Layton intersperses story and puzzles then you will know what this game is immediately. And if Professor Layton works for you, then Jacob Jones likely will as well. But I don't want to diminish this game by casting a shadow as a knock-off. It's not. Jacob Jones has a style very much its own.

This first episode, titled A Bump in the Night, sets the stage. Jacob Jones lives in a strange world where the bushes are painted cardboard, half the people don't have noses, and everything is very brightly colored. Also, there's a bigfoot. Jacob doesn't know that last part right away. When he first arrives at Camp Eagle Feather, he doesn't expect anything much beyond a boring summer with a bunch of kids he has no connection with while he'd rather spend his time exploring the world with his parents. But it isn't long before the presence of a sasquatch named Biggie pulls him into an adventure to find out the mystery behind the last thing the hairy fella's mother gave him before disappearing fifty years ago. 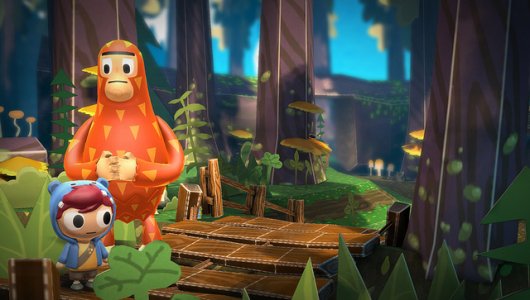 Along the way, Jacob will run across the faculty of Camp Eagle Feather, including the gruff, no-nonsense phys ed teacher, and hang out with other campers, including a dim-witted boy with a constantly runny nose, and the bossy Marion—who prefers to be called by the more metal-sounding Deathkill. You'll spend time with some characters more than others, with a few offering hints of bigger roles in future installments. The charming cast of characters are a lot of fun, each one well-realized and depicted in the same fun visual style.

The art is easily the most striking aspect of the game and is what drew me into buying it. The environment looks like it was crafted from everyday objects, but not overtly so. The cardboard-esque shrubbery gives it the feeling of an elementary school play. The characters look like toys in a way, with sculpted hair and big open eyes, with the titular sasquatch, Biggie, resembling a bowling pin with arms. Rendered and animated in 3D, in a lush and brightly-colored woodland camp, everything comes together beautifully.

When it comes to moving around on the PlayStation Vita, you can spin the camera with gentle swipes of the screen. As you transition from one camera angle to another, or from one area to another, the characters will take set positions on the screen. Tapping on something Jacob can climb or comment on will cause him to do exactly that. Tapping something he won't interact with does nothing. While you have an inventory, simply possessing an object and tapping on something you need to use it with is enough. You don't directly interact with the inventory objects, nor can you can use the wrong combination of items. 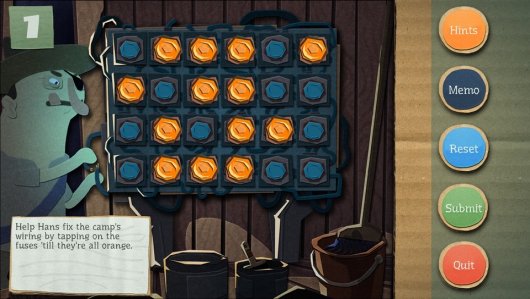 As polished as the art style is, the voice acting and sound design fares just as well. The characters engage you in fun and often quirky conversations, each having a unique personality that shows in the writing and the actor’s delivery. Some dialogues—and some monologues—go on too long but it's all delivered well. A sparse and joyful musical score gives exploring the world a playful feeling as well. Really, as far as presentation, Jacob Jones hits what it's aiming for perfectly.

The first episode consists of two dozen puzzles. You'll find most of these during play, but if you miss any of the side puzzles you can play through them, minus any story context, via the Pause menu. The puzzles are often tied to an obstacle in the real world rather than some strange aside. With one exception that I found, no one is standing around simply waiting to challenge you with a puzzle. Instead, when a tree blocks a car's path in the game, you have to figure out how to get it out of the way. When you and your friends order a pizza, you have to split it evenly, taking their dietary preferences into account. If you need to work a puzzle out, you can bring up the Memo function which overlays a sheer film atop the puzzle so you can use some notation tools to overcome what's troubling you. You’ll find a good mix of puzzle types overall, with a handful of sliders, arithmetic problems, and logic puzzles.

The puzzle instructions were clear enough for me, though I do wonder if folks who aren’t coming to this game with a background in Layton-style adventures wouldn’t benefit from a touch more explanation. Puzzle difficulty is graded in Merits. Easier puzzles are worth 1000 Merits while the harder ones will get you 5000. For the most part, the Merit level matched the actual difficulty of the puzzles. Providing the wrong answer will knock your Merit total down a bit. For the ones I couldn't noodle through on my own, I turned to the game's hint system. 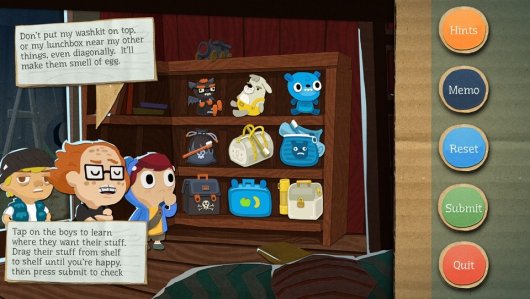 Throughout the environment, you'll find soda cans. Tilting the Vita allows you to peek behind signs and bushes to uncover even more. Getting the Vita to recognize that I was tapping on a can was sometimes a pain but the interface otherwise works fine. In addition to being eco-friendly, collecting soda cans earns you phone credits. You use these credits to check your hintbook, call Uncle Ed, or call your big brother. The hintbook is the cheapest but gives only the barest of clues while Uncle Ed and Big Bro will lay out respectively larger details. Even Big Bro never gave me the solution outright, which I liked, but did give me enough so I could figure out the puzzles on my own.

My playthrough took me just over 3½ hours. Timewise, I think that's a fair return for my money, but some areas seemed really thin on puzzles, often letting a funny conversation go on too long where I would have rather traded some of those lengthier story segments for another puzzle or two.

Not many games dare to challenge Professor Layton's throne, with its rich blend of polished narrative and top-notch puzzling, and those that do often fall very short, but Jacob Jones and the Bigfoot Mystery is a solid attempt that sets a high bar for the rest of the episodes to match. The story ends with an intriguing reveal and I definitely want to see where Jacob's summer takes him and Biggie next. Hopefully the next chapter will have a better ratio of story time to play time than A Bump in the Night, but it’s a minor flaw in an otherwise entertaining experience. If you're a fan of puzzlers and don't mind them cushioned in a thick dollop of story, you'll want to dip your toe into this series.

While the first episode is a little uneven in its story and puzzle pacing at times, Jacob Jones and the Bigfoot Mystery is a delightfully stylish debut that makes me want to come back for more.

GAME INFO Jacob Jones and the Bigfoot Mystery: Episode 1 – A Bump in the Night is an adventure game by Lucid Games released in 2013 for Android, iPad, PC and Vita. It has a Stylized art style, presented in Realtime 3D and is played in a Third-Person perspective.

What our readers think of Jacob Jones and the Bigfoot Mystery: Episode 1 - A Bump in the Night