Review for Haunting at Cliffhouse

After the death of her husband, Sarah Blake is looking for an escape from her everyday life. A conveniently-placed pamphlet showcasing a relaxing resort at Cliffhouse Bed and Breakfast seems to be the perfect getaway. Not surprisingly in a game called Haunting at Cliffhouse, however, her stay will be far from relaxing, as strange things start to happen as soon as she checks in. The game is anything but spooky, so don’t let its supernatural premise fool you, but as you begin to unravel the history surrounding the hotel, the forgettable story and poorly integrated puzzles may prove far more unnerving.

Haunting at Cliffhouse is the third game from Cindy Pondillo, the proprietor of the Mystery Manor website, whose latest casual puzzler is very similar in style to Hauntings of Mystery Manor and Intrigue at Oakhaven Plantation. It's a very linear, melancholy first-person slideshow adventure with beautiful but static environments to explore, and a variety of characters to meet and puzzles to solve as you slowly work out what's behind the hotel's mysterious past.

Though you never actually see Sarah during the game, you will encounter both the living inhabitants of the hotel and the ghostly apparitions that only she can see and hear. It's never explained why Sarah alone has this ability, but the ghosts themselves are not threatening when they appear, instead materializing to show bits of past conversations worthy of a soap opera when a puzzle is completed. Sarah is not frightened by anything, even when it seems like she should be, like the time she walks into a room and the piano is playing by itself. 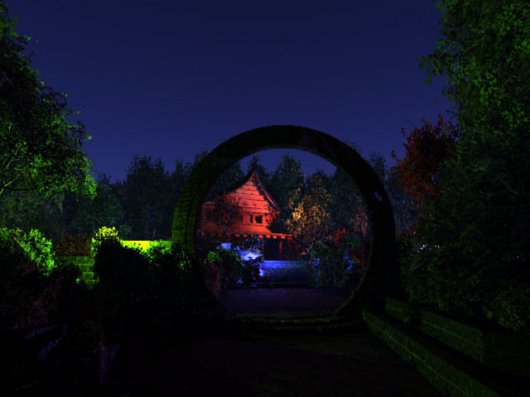 Unfortunately, none of characters leave much of an impression, from the haughty professor to an older couple staying at the hotel. They all seem very clichéd, never really breaking familiar molds. The story is equally predictable for the most part, with Sarah uncovering a ghostly love triangle as she probes the hotel’s hidden secrets while someone – or something – tries (though not very hard) to keep them concealed. The ending, at least, does include a twist that is refreshingly unexpected. The dialogue and descriptions throughout don't make up for the lack of surprises to that point, as they feel rather stiff, like when a certain character declares that she is "patiently waiting" for her coffee to be made. Sarah also does things without any obvious motivation, like when she helps an old sea hag by breaking into other guests’ rooms. The hag doesn’t give her any good reason to do so, yet she goes along with it anyway.

The areas in and around the hotel include many pretty locations, from a chapel hidden in the woods to a little hut on the beach and a grand ballroom inside the hotel. Each screen is filled with lots of small details, including portraits hanging on the walls, and flowers and vases on every table space. These little touches really help, since there are no animations at all, at least until the very end. This is true of the characters as well; the models are nicely designed – the ghosts looking appropriately ethereal – but they all stand in place, never moving even their mouths when they speak. There is no way to click on them to start a conversation either. If they have anything new to say, they'll simply start up a conversation whenever Sarah walks into the room. All dialogue is subtitled, and the text stays up on screen even when the character is done talking, so you must continue clicking the mouse to advance the conversation.

The sound in Haunting at Cliffhouse is an equally mixed bag. Soothing piano music lulls you into a false sense of security (or perhaps a true sense of security since you can’t die in the game, though you are occasionally meant to feel like you’re in danger) inside the hotel, while suitable Oriental music accompanies you within the Japanese garden outside. Unfortunately, the music stutters occasionally if you click to interact with something on screen. The voice acting can seem really corny at times, with pauses in weird places between words. A lot of the characters like to talk about local history, and sometimes they sound more like they are reading aloud, rather than being interested in what they are saying, particularly the boatman.

The puzzles vary, though most of them tend to be on the easy side. The hotel welcomes guests with a scavenger hunt to find random objects, though there is no need for pixel hunting, since the items are fairly obvious. When investigating the rooms, you'll discover puzzles that will unlock more locations to collect different things. Some of the puzzles feel forced, like a mask challenge early on. Pictures of different masks flash onto the screen quickly, and you need to match a certain number of them to win the minigame, which then adds a mask to your inventory. There is no reason for it to occur in the game – no one is shuffling the masks around; the minigame simply appears and functions on its own. Other puzzles include matching Japanese symbols to the months of the year, which has a help button that will translate the Japanese figures to English, and pictures that are scrambled and need to be put back together correctly. These tasks often feel contrived just for the sake of giving you something to do rather than being an integrated part of the setting. There is a maze near the end of the game that can be confusing without a map, although once you find your way through the first time, a fairy shows you the way back to where you started. 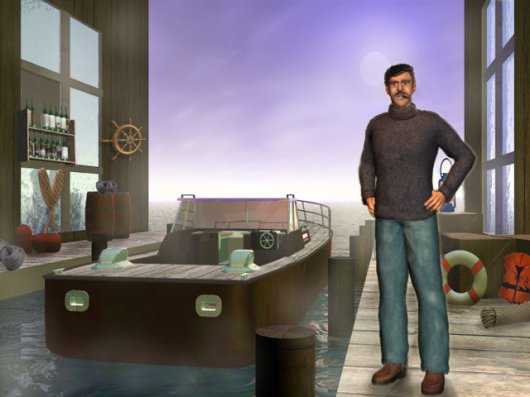 Puzzles can be skipped by pressing the Tab key, though all of them are pretty easy to solve. The fast-moving match games do not penalize wrong guesses, and there is no time limit. In some puzzles there is a completion bar at the top of the screen that shows how many steps are left until the puzzle is finished, which can be really helpful when assembling a jigsaw, for example. A spot-the-difference task between two pictures is nicely done, without the answers being too obvious or too obscure. When most puzzles are finished, the reward is a static conversational scene from the ghosts’ past that reveals more of their story. The puzzles themselves are fairly standard, with nothing that stands out as unique, which limits their appeal for any experienced (or even casual) adventure gamer.

Right-clicking brings up the inventory, and though there are not many inventory puzzles, an occasional object combination is required, and usually an item is needed to start a puzzle. Hotspots are quite large and have a sharp outline around them, making them plainly visible. There is no map in the game, and it is easy to get turned around and forget which areas have not yet been explored, though there's very little need for backtracking once you're done. To add to the history of the hotel, there is a 22-page book to read, though it's entirely optional.

Haunting at Cliffhouse took me about five hours or so to complete, making it a reasonable value for its low price. Sold exclusively at the Mystery Manor website, there are both disc and downloadable versions available. If you're looking for a compelling plot with interesting characters and fully-integrated puzzles, you'll need to look elsewhere. But for some pleasant scenery and a variety of lite if rather standard puzzles, Haunting at Cliffhouse may provide an inexpensive weekend getaway.

Haunting at Cliffhouse is available at:

The ghosts of Haunting at Cliffhouse are far from frightening, but the thin story and standard casual puzzles may just scare you away from an otherwise pleasant vacation.

GAME INFO Haunting at Cliffhouse is an adventure game by Cindy Pondillo released in 2012 for PC. It has a Illustrated realism style, presented in Slideshow and is played in a First-Person perspective.