That Agustín Cordes knows how to build up tension shouldn't come as a surprise to anyone who has played Scratches. Now the Argentinian indie developer is at it again with his new studio Senscape, and at the gamescom I sat down with Agustín and lead artist Pablo Forsolloza for a demonstration and discussion about the recently released teaser demo of Asylum and the proprietary engine behind it. The first sampler is intended merely to provide a feel for the atmosphere and interface.  Shortly before the game's final release date, which is currently no more specific than '2013', there will be a proper demo that encompasses about half of the first floor and will allow you to explore a lot more freely.

The developers still do not want to disclose much about the story just yet. In fact, even the beta testers don't know any more than the rest of us, as Senscape wants the first playthroughs to be as pure as possible without any prior knowledge of what is going to happen. What we do know is that the game takes place in a large abandoned psychiatric hospital. You play a former patient that for some reason returns to the asylum and finds it not quite as abandoned as it was supposed to be. We also know that torture will play a role. While we will not really see anyone being tortured, there will be disturbing scenes in which torture is implied, as we will read about it and hear someone recall his past.

As with Scratches, the atmosphere and fragments of story will contribute to the scare factor much more than actual terrifying events occurring, although there will certainly be some genuine spook-moments. The game is inspired by Lovecraft, and it will mostly be your own mind and imagination that makes it frightening. Asylum will be less subtle, more psychological and definitely more disturbing than Scratches, and although you can't die, you will constantly be wondering what could happen around the next corner. It will also be far less lonely, as you will meet other characters and there will be less reading to do. The new game will also feel much more dynamic than Scratches, with things like flies surrounding a spoilt meal, blinking lights, moving clouds in the sky and dust particles glittering in the light.

Agustín and Pablo aim to make Asylum as comfortable to play as possible, with some radical approaches to inventory and dialogues. They stress it will certainly not be an easy game; they just want to make it as accessible and worry-free as possible. They have been thinking a lot about the clumsy way adventures usually deal with inventory items, requiring one click to open the inventory, one more to select an item, another click to close the inventory and finally one click to use it. Also, having many items like in Scratches, many of which you may not need until much later, distracts the player from the problem at hand. Using Machinarium as an example, which doesn't even have words but makes it absolutely clear what is going on with the characters, Pablo describes how an easy interface does not mean the puzzles can't be tricky. In Asylum, you will only have a journal (quest log) that doubles as an inventory and a dialogue system. It hides in the lower right corner and you can tuck it away after every use or keep it open all the time. The game will also have a kind of hotspot revealer. Pressing the space bar will make a subtle glowing orb appear that shows where there is something to do.

So how does an adventure without an inventory work? Quite intuitively, really. For instance, if you encounter a locked door, an entry will automatically be logged in your journal: “Find key to locked door”. Once you find it, the journal will be updated (in the teaser demo, a dot appears next to the “key to locked door” entry, indicating that it is now in your possession). You can now return to the door and either select the entry in your journal to use the keys on the door, or simply click on the door again and the game will assume you want to use the relevant item on it. For some items it will be possible to zoom in and look closer, but there won't be much need for taking items along with you. Since this demo contained only one door and one key, it was an automatic process and not much of a puzzle, but Agustín and Pablo promise there will be complex puzzles that will not be nearly so simple. Somewhat similar to Gabriel Knight or Carol Reed, certain observations and objects will become dialogue options that you can discuss with other characters. If your task, for instance, is to “find the infirmary” you could either walk around until you find it, or ask someone for directions. In both cases the entry would be crossed off of your to-do list. 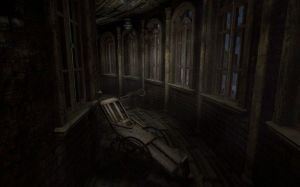 Asylum will also feature a radical approach to save games, as there will be no way to manually save your progress. Instead, the game constantly saves and even synchronizes your progress with services like Dropbox if you desire, so you can continue a game you started on your PC on your iPad elsewhere. For those players who like to replay scenes, however, there will be a saved bookmark in each of the game's ten or so chapters.

The main character in the game is voiced by longtime industry veteran Josh Mandel, acclaimed writer and designer who also voiced King Graham in Sierra's King's Quest series. He has recorded all of his lines with several emotional states, so the developers can pick the one that is most appropriate for the progress you've made. His remarks about the things he sees and remember will not only help you feel conscious of the environment and aware of the character you play, but since the comments will progressively become more strange and anxious, you will experience first-hand how he slowly loses his mind. It's crucial that players can connect with the unseen character in the asylum, and Josh's voice acting is a big factor in that.

The Hanwell Mental Institute has been painstakingly built to resemble real-life Kirkbride-plan asylums, and it is entirely architecturally correct, each room fitting together like a giant 3D puzzle. There are three floors, not including the basement, and over 100 rooms, most of which will be open to the player. Every room will look different and they will all have a specific use, such as the reception area, doctor's offices, a morgue, a workshop for the inmates, and even a museum. Most locations will give you a claustrophobic feeling, but there will be a few large open spaces to make you feel exposed and vulnerable. You will also be able to go outside and walk around the building.

Although the asylum is huge, with lots of things to see and do, there will probably not be an interactive map facilitating fast travel, for several reasons. Firstly, players will never need to travel great distances, as each chapter will be concentrated around a central area. It will be possible to freely explore the whole building, but no excessive backtracking is required for puzzles. Secondly, at certain points in the game, there will be scares and hints that 'jumping' players would never see. And thirdly, the developers believe it would mess with the immersiveness and the sense that something could happen around the next corner if you could simply skip to another room at random. If the testers think that walking around is too boring, however, they may rethink this idea, as comfort is the key word.

Built from the ground up by Senscape, the engine driving Asylum is called Dagon, and it is completely open source and free for everyone to use. As a gesture to the adventure community, they have released the (fully commented) source code for the teaser demo, so anyone who feels like learning to make a new game can do so by reading the script and modifying or experimenting to their heart's desire. Although they do not intend to make any money off the engine for now, they may think about providing professional services or specific custom-made tools in future if enough developers start using Dagon. The engine is capable of very high resolutions (each node in the game is a cube of 2048 x 2048 x 2048) so it looks good even on big monitors. Asylum uses pre-rendered graphics that load whenever you move to the next node, not only because it's much faster, but because many adventure gamers just don't have computers with the power to calculate the textures in real time 3D. The developers have recently added a particle system enabling falling dust, and can add snow and rain to the engine if the game requires it.

In a move that's bound to garner some controversy, Senscape are contemplating some form of downloadable content (DLC), some of which will be free and some of which must be purchased. This will in no way be required, as the story will come to a satisfactory end in any case, but it will offer things like alternate perspectives, extra characters and a different building to explore. Rather than having another Director's Cut that requires players to buy the same game again but with additional content, players would be able to get something extra for a small price. When Agustín and Pablo did their research for the layout, they visited a real asylum and discovered many of these had separate buildings such as a laundry or printing facilities. The DLC could add such an area or unlock a room that was inaccessible in the main story. Another idea is that as the game takes place at night, a download could take the player back during daytime to provide a less horrifying but sadder experience. It will never feel like the game isn't complete without these additions, they are just extras for players who can't get enough. At this point, they're just exploring ideas and nothing has been decided yet, but they think people will want more of Asylum and will be willing to pay for it. I don't know about paying extra for it, but based on what I've seen so far, I for one am very curious to discover more about the game and the horrifying secrets that await in the Hanwell Institute next year.

Agustín Cordes
Yes, we are aware of problems with the interface. Sometimes it's smooth and comfortable as it should, but under certain conditions it's insufferable. We're definitely working on improvements as we speak.

MoonBird
The presentation demo was a disappointment for me. The movement is really crappy. It makes the game almost unplayable. Mouse speed was frustratingly slow in 2 of the 3 modes, and in the 1 mode it was totally wild and crazy, uncontrollable. If they fix the control problems in the final version or at least put some fine tune settings in, I could be interested.

seagul
I loved Scratches. It seemed to be made personally for me. And the demo from Asylum was wonderfull. So i have high hopes for Asylum.

WindowsNT
Yes we do want more asylum! Lovecraft rulez! Interesting game. Hopefully it will worth its money.
Advertisement
preview
continue reading below