We get a small commission from any books sold.
Written by
Drummond Doroski — September 17, 2010

I've always been amused that the term "adventure game" persists the way it does. Whether solving a murder mystery, exposing ancient conspiracies, or investigating a haunted house, if the gameplay involves solving puzzles to overcome obstacles, the term applies, even if there’s very little similarity to the story genre of the same name. But when I think of the word "adventure" outside the gaming world, the next word that pop into my head is "Indiana" closely followed by the word "Jones". Clearly the folks at Animation Arts are somewhat in agreement, as their latest offering, Lost Horizon, is practically an homage to the globe-trotting archaeologist and an adventure game by every possible definition. It’s also a fairly good one. Though never groundbreaking or quite matching its own ambition, falling a little short of fully establishing an identity of its own, this is a polished game that remains entertaining throughout, and reminds us of how much “adventure” can still be found without losing a focus on puzzle solving.

Lost Horizon features Fenton Paddock, an ex-military British smuggler working out of Hong Kong in 1936. Predictably, Paddock is rugged but charming, and loves alcohol, women, and stirring up trouble. The adventure has hardly begun before he is beaten up and thrown into the harbor in a makeshift coffin by triad thugs. After escaping that little predicament, Fenton is given a mission by Lord Weston, a former associate in the British military, whose son Richard has disappeared in the Himalayas in what should have been a routine cartography expedition. Lord Weston needs someone outside the military to investigate what has happened, and as Paddock is Richard's best friend and conveniently has his own plane, he seems the ideal choice to send on the hunt. Of course, things are never that easy. In addition to triad goons, Paddock has to contend with Nazis (naturally) as he tries to find his way into the lost city of Shambhala, which is said to contain a power that would allow the Germans to conquer the world (obviously). Paddock is joined for a while by Kim, a lovely young woman with a grudge from his past who gets caught up in the adventure along with him, for what wise-cracking hero would be complete without a girl to try to win along the way?

Right from the outset, this game shows its intent to provide the kind of cinematic story once popular in weekend movie serials, just as the Indiana Jones movies did. Even the main menu displays the marquee of a 1930s movie theater, with different entrances being used for various options. The game itself offers one simulated “action” sequence after another in the early going, forcing our heroes to escape a high-speed car chase and defeat a German fighter plane from the cargo hold of their own unarmed aircraft. These segments are particularly exciting, creating a feeling of genuine danger for the characters, even though the solutions are strictly puzzle-based and there’s no way to die. The puzzles may be fairly easy, but the threat feels palpable and the satisfaction of escaping really added to my enjoyment of the game. Who doesn’t love feeling like they’ve just defeated armed foes armed with nothing but their own cleverness? I just wish the story had included more segments like this, as they noticeably tail off after a strong start. Many of the other truly exciting moments of the game, such as when Paddock is fleeing from a Nazi camp in the Himalayas, are almost entirely told through impressive-looking cutscenes. 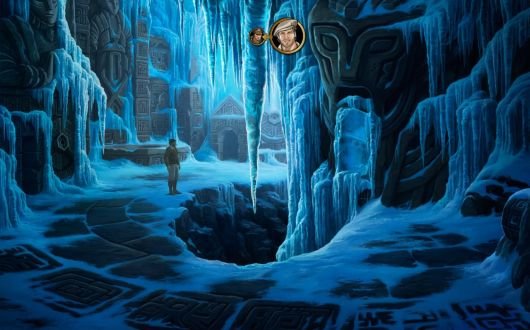 The quest to find Shambhala gives Paddock a reason to visit all sorts of places around the world, giving the visuals a nice, diverse feel. From a snowy Tibetan mountainside to tiger-prowled jungles to a castle in the hills of Germany, Lost Horizon has some truly beautiful visuals. In a change from the developer's earlier Secret Files series, the backgrounds here are hand-drawn art with computer-crafted models blended in. This gives certain scenes a more stylized, almost cartoonish look, and it really works well. Ambient effects such as fire, snow, and rain are rendered beautifully and greatly enhance the settings they're used in. The character models are nicely designed, but they don’t have a lot of facial expressions to work with, and the close-up shots often don’t work as effectively as the distant angles do. There’s also no real attempt at accurate lip synching, which distracts from the close-ups as well. However, these are minor flaws next to the graphic beauty of the game as a whole. The wide-ranging scenes are also enhanced nicely by the music, as the score uses all sorts of instruments to establish atmosphere. It is often a little over-the-top in doing so, but the exaggerated style suits such a tongue-in-cheek adventure. From the stirring main theme to the lazy Moroccan bazaar to Shambhala itself, the music never feels out of place or too repetitive while you explore.

As dramatic as the presentation tries to be, the game's interface is fairly standard and should be familiar to most players, particularly those who have played the Secret Files series. Each screen has a handful of hotspots to click on, and the smart cursor shows what actions are possible for each. Right-clicking prompts your character to describe the item or person in question, while left-clicking will attempt to manipulate, pick up or talk, depending on the context. Inventory is arranged at the bottom of the screen, and combining items is as easy as clicking one on the other, and here the cursor shows whether a combination is possible without having to click to hear a repetitive response. There's also a highlighter that clearly shows where all hotspots are. Some may feel this makes the game too easy, but it's entirely optional, and as someone who finds pixel hunting to be one of the least favorable aspects of the genre, I think this feature is a prudent one. There are several scenes where I found needed objects small and difficult to see, and the highlighter mitigated what could have been a long and unpleasant search. There's another icon that describes whatever predicament Paddock is in at the time and what your next goal should be, but all it does is state the obvious. It also needs to be updated a little more often, as at one point I had successfully solved the problem it told me should be my next objective.

Puzzle solving is largely inventory-based and the obstacles are rarely illogical or dull in design. Some of the tasks will certainly strain belief, and at times you’ll know what to do but be prevented until Fenton has established a reason, but the solutions are largely intuitive and shouldn’t give experienced players much difficulty. Between the hotspot highlighter and the ease of trying every item combination if necessary, getting yourself out of a rut is usually fairly simple. I’m hesitant to say the puzzles are too easy, as some segments are very clever and should give even a seasoned adventurer a fun challenge. At times Kim becomes a second playable character needed for cooperative solutions, and one sequence has you controlling two protagonists simultaneously, separated but working together without ever directly interacting with each other. On the other hand, there are several sections where your options are so limited that they practically solve themselves by process of elimination. When you only have one or two objects and a handful of hotspots to utilize, you’re not going to be scratching your head very long. 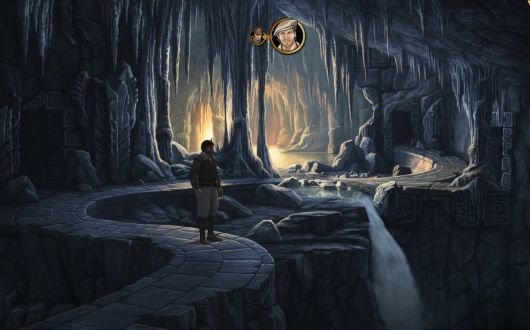 There are a couple of sections that offer some variety to the puzzling, like when Paddock has to reassemble a broken record like a jigsaw. It’s a simple puzzle and it’s been done before, but the change of pace is nice. One interesting addition to the rare standalone puzzles is a difficulty option, which you’re asked to select before you begin. Lost Horizon also has at least one puzzle with multiple solutions. In a very early scene, how easily you escape some thugs depends on how successfully you’ve flirted with an attractive singer. Put on the right moves, and she’ll distract them for you. Strike out and you’ll have to arrange your own diversion. This was the only segment I found that provided alternative paths, though I might have simply missed other multiple solutions throughout the rest of the game.

The one area most lacking in Lost Horizon is the writing. The story can certainly be clichéd, but as it’s based heavily on the serial adventures of old, this is hardly surprising. Unfortunately, it never seems to rise above that formula, and the script itself is a bit drab. It’s not that the dialogue is bad, just not very good. Paddock’s requisite one-liners may elicit a couple of chuckles along the way, and a little backstory attempts to inject him with some depth, but it never really reflects in his character, even when it influences a choice he makes late in the game. Kim could have made a great foil, but she is in so little of the adventure that her late-game behavior feels like she’s simply doing what the heroine is supposed to do at the end of the story. For the most part, the two never develop past the bickering they share to develop the romance they’re clearly meant to desire. The voice actors all do a fine job with the various accents and styles, but there’s simply not that much for them to do here, portraying two-dimensional cutouts of characters we’ve all seen many, many times before.

Overall, Lost Horizon is good game that falls a bit too short in some areas to really be great. At its best the game is fun, there’s no question of that, and the graphics and music hold up their end of the adventure easily. But the storyline and characters are largely forgettable and the puzzles rarely excel until the last of the game’s seven chapters (which has some particularly clever ones). Still, the game’s solid length of 15 or so hours makes it a substantial offering, and the lackluster script doesn’t mean there isn’t a lot of enjoyment to be had here. Perhaps the hardest aspect of creating an Indiana Jones-type adventure is making it feel like one we haven’t seen several times before, and Lost Horizon doesn't entirely succeed, settling instead for a familiar but reasonably enjoyable adventure.

Lost Horizon is available at:

It's all been done before, but Lost Horizon is a fun, polished “adventurous” adventure that will keep you entertained for a good long while.

GAME INFO Lost Horizon is an adventure game by Animation Arts released in 20102010 for Android, iPad and PC. It has a Illustrated realism style, presented in 2D or 2.5D and is played in a Third-Person perspective.