We get a small commission from any books sold.
All Bitmap Books
Written by
Berian Morgan Williams — July 16, 2005

Robotragedy is the debut release of a Cuban named Pijin Pastrana. Versions exist in both English and the creator's native Spanish, although there are a lot of issues with the English version, which we'll come back to shortly.

The game follows the exploits of a floating robot named Toby X, who is smitten with a famous robot actress named Robotinna. Robotinna has been kidnapped, and Toby is determined to rescue her. The plot moves forward in stages, with different areas accessible at certain times, and with changing goals as the game progresses. Toby begins the game trapped in a room in his spaceship home, and his aim is to escape the room in order to watch his favourite TV show. From here onwards the plot becomes confusing -- Toby decides to visit another planet, Quoid, to try to find Robotinna, although quite why he chooses to go there is uncertain.

This brings us to probably the biggest failing of the game: the translation. It's very obvious from the language in the game that the creator is not a native English speaker. Sentences often seem garbled and awkward. Although the basic meaning is understood, the clumsiness (although understandable -- we can't expect non-natives to have perfect vocabulary, after all) of the text can be very off-putting. This is especially problematic because the game is mostly humourous in tone, and a lot of jokes fall completely flat because of the awkward phrasing. A gag that in Spanish probably would have brought a chuckle causes only groans in the English version. 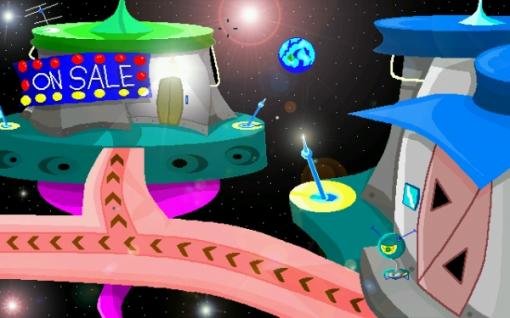 Puzzles are almost entirely inventory-based. For example, in the first section of the game, you have access to four different rooms. In these rooms there are at least 25 items to take. Every one of these items must be used in some combination to escape the area. Some of the puzzles are slightly nonsensical (using a mouse to chew through a rope when you're already carrying a sharp knife?), but for the most part they're of a typical "twisted adventure-game logic" type.

The game is of medium length, with a number of different locations to explore along the way. The third-person, point & click interface resembles the old Sierra style, with icons that animate when over a hotspot you can interact with. Characters with whom you can converse are few and far between, which is probably good, as the few dialogues again suffer from poor translation -- conversations often come across more as confusing and bizarre than relevant or appropriate. Discussions tend to focus more on a 'bring me this and I'll give you this' quest-giving than contribute any kind of rich characterisation or verisimilitude.

Graphics are definitely Robotragedy's strong point. Backgrounds are of a stylized, cartoony style reminiscent of Day of the Tentacle. Close-ups are shown of certain areas -- looking closely at a TV, for instance, will bring up a more detailed view with extra hotspots. Characters, whether human, animal or robotic, are all well-detailed. Character and interaction animations are sublime, with every action being visually depicted, and each animation smooth and fluid. There are even animations for incidental background events, like birds flying overhead and flags fluttering in the wind. 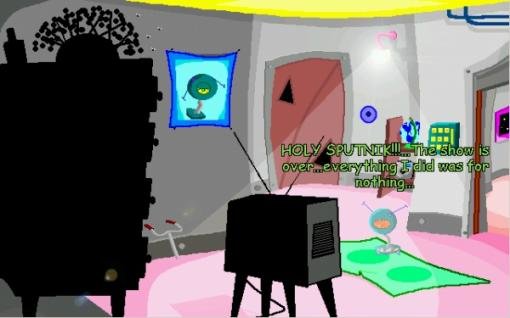 Sound is also well done, with fitting effects for every animation that occurs. Music is good, with appropriate tunes for all occasions -- a chirpy electronic beat most of the time, with more dramatic tones in tense parts (although the creator admits in the game's Readme file that he lifted the music from an unknown source).

What our readers think of Robotragedy