We get a small commission from any books sold.
All Bitmap Books
Written by
Kim Wild — July 8, 2005

Blazing Dragons was originally released in 1996 for the Sega Saturn and Sony PlayStation (the latter of which is being reviewed here). For those who are unfamiliar with the game, the adventure is based on the little known cartoon series that aired at the time, focusing on the adventures of the Knights of the Round Table and the land of Camelot, except with a twist -- all the protagonists are dragons and the villains are human. With Terry Jones (comic children's author and star of acclaimed British TV series Monty Python), behind the creation of the characters, you can expect plenty of madcap antics and lashings of humour for good measure. Despite my reservations that such comic subject matter would work as a basis for an adventure game, it manages to pull it off with enough Pythonesque humour to live up to its star billing.

Blazing Dragons follows the escapades of Flicker, a dragon inventor who is mocked by his brothers and the rest of the kingdom for his ideas. In love with Princess Flame, Flicker is desperate to earn her hand in marriage, but in order to do so, he needs to compete in the tournament which is being held to find the successor to King All-Fire of Camelot. Unfortunately, only knights are allowed to enter and Flicker is usually left behind to complete menial tasks such as washing the mountainous piles of dishes. Added to this, the vile Sir George is determined to submit the Black Dragon into the tournament and the Knights of the Round Table have been sent to find out more about this mysterious beast. To win the heart of the woman of his dreams, Flicker must prove himself worthy of being knighted and emerge victorious from the tournament before Sir George can conquer the kingdom.

For all of their teasing, Flicker's brothers (who are also the Knights of the Round Table) prove to be the real incompetent buffoons of the game, with Flicker usually having to fix their blunders. There is Sir Blaze, the vain one more interested in gazing at his own reflection than doing any work; Sir Gas Flame, who is visually impaired, making him pretty useless; and Sir Loungealot, the leader of the motley crew who can dish out the orders but do very little else except lust after Flicker's beloved Princess. A human who thinks he is a frog after an encounter with a princess, a pied piper who can't stop playing due to a fear of rats, and the Lady of the Lake complaining about pollution are just a few others in the crazy bunch you'll meet during your escapades. 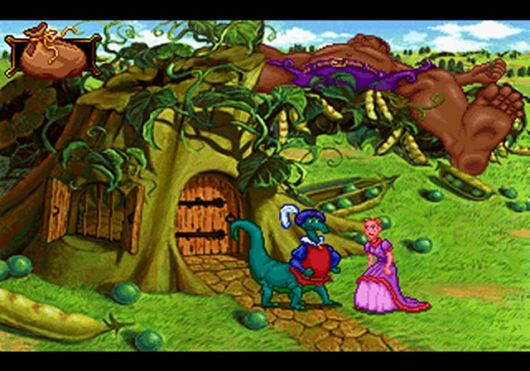 Set in the medieval world of Camelot, the locations have a fairy tale quality about them, enhanced by the presence of famous characters like Rapunzel. The setting itself isn't particularly original, but there are enough twists on the Camelot and fairy tale themes to make it interesting without seeming overly clichéd. It's the type of game that would be endearing to little children, yet has enough going for it to appeal to us bigger kids, too.

Everything has been drawn in a colourful cartoon-like style which at times comes across as magical. At important points, cutscenes occur which have close ups of the various characters and it's a shame that more of these don't happen since they add even more atmosphere to the game. These visuals are complemented by superb voice acting from Terry Jones and various others. The different styles of voices, ranging from quiet and meek to the highly deranged -- particularly when you reach the home for insane story book characters -- bring the locals to life and make the dialogue a joy to listen to. The dialogue isn't all just for entertainment value, either. Clues will lurk within snippets of conversation, while remarks from Flicker examining items can prompt ideas, and conversation choices can open up new avenues of investigation. At times the humour is very reminiscent of the Discworld games, so anyone who appreciated the insanity of those titles will be at home with the dialogue here.

As Blazing Dragons is essentially a point & click game, control of Flicker takes place by moving around a cursor to accomplish various actions. Unlike PC games that make use of mouse and keyboard commands, control is entirely through a gamepad, so you cycle through the different cursor options using the R1 button. The foot icon enables Flicker to walk from area to another, an eyeball examines items in more detail, a hand picks up items and carries out actions, while the face indicates the ability to communicate with other characters. Items collected have to be entered into the inventory manually, which isn't a major concern, but it can be cumbersome compared to games that complete this process for you automatically. The aforementioned icons animate when there is something on-screen to interact with, although you'll have to figure out which background items are really linked with puzzles or are just there for show. The default control configuration works well, but it is also possible to change it to suit your own preferences. The menu features some nice options, with the ability to activate subtitles, turn speech or music off, as well as being able to save anywhere via password or memory card. This can be accessed simply by pressing the Start button. 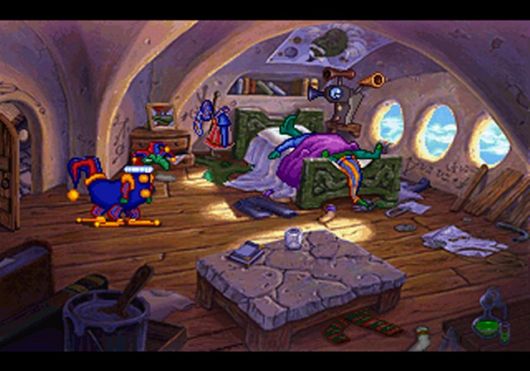 Puzzles in Blazing Dragons are very much in the traditional vein, consisting of combining inventory items, using items with external locations, giving required objects to different characters, and conversing with the residents of Camelot. Generally the puzzles are straightforward and logical despite the wacky humour, and close examination of inventory items and the scenery will generally offer up a clue or two. There are also four arcade sequences included in the game, which is a good or bad thing depending on your view of such events within the genre. The first is a catapult target range where you have to aim the catapult at the wooden knights and defeat nine of them plus Sir John in order to win a needed item. Failure means having to start again, but as it is quite slow, it doesn't feel too much like a pressurized time event. The second is a very basic dance clone where you have to press designated buttons in a row (also not too fast), and the third involves closing Flicker's eyes so they don't fill with water (which makes sense when you come across it). The last, and ridiculously frustrating, action segment involves thumb wrestling, where you essentially resort to button bashing to succeed. Unlike the other sequences which can be tackled in any order, this one has to be played over and over again until it is finally conquered. Those who really object to these in an adventure won't be too frustrated with the first few, but thumb wrestling near the end of the game is difficult for the reflex impaired, and is worth bearing in mind.

A common problem with console games is the presence of loading times, and this is also the case here. Moving from one scene to the next will result in a loading screen, but thankfully these pass quite quickly in comparison to the Broken Sword console versions. There are occasions of pixel-hunting as well, where relevant items blend too well with the background and can easily be missed. Another downside is the ease of the game, which is exaggerated even more so by the manual. If you want to play through Blazing Dragons without puzzles being spoiled, don't read the hints section as it makes solutions far too obvious and ruins the fun of experimentation. I managed to complete the game over the course of several evenings without too many difficulties.

While the arcade sequences can be frustrating and there are occasional problems of pixel hunting, there is very little else that can be said against this game. Console-specific adventures are a rarity, and it's pleasing to see how well Blazing Dragons works in terms of gameplay and control method, which proves that consoles can be a suitable environment for adventures with a bit of consideration for the platform. Terry Jones with his colleagues do an excellent job of bringing the animated characters to life with their talented voiceovers and the humour stands up well even by today's standards. The fairy tale setting has been injected with a jolt of originality and will charm you as much as it manages to entertain.

Blazing Dragons is a genuinely refreshing adventure that entertains without being too juvenile in its humour, and offers fresh a perspective on fairy tale characters. If you can still find it, the game is well worth a look, particularly as one of the very few adventures made exclusively for console.

GAME INFO Blazing Dragons is an adventure game by Illusions Game Company released in 1996 for Retro. It has a Comic cartoon style and is played in a Third-Person perspective.

What our readers think of Blazing Dragons