Review for Hauntings of Mystery Manor

As choices of source material for adventure games go, the humble website is an unusual one. The "Adventure Gamers Adventure Game" may be some years off yet, but in the meantime, a completed example is supplied by Cindy Pondillo, whose Hauntings of Mystery Manor is based on her own adventure game site. The author shows herself to be an innovator in other ways, too. Hauntings is only the second commercial game to be produced using Adventure Game Studio, and one of only a few that makes use of a first-person viewpoint. In this relatively brief game (Pondillo estimates five hours of playing time, which seems about right), the player character is confronted by supernatural forces in an inherited manor, but far from being hostile, these ghosts require your help in finding rest.

Hauntings of Mystery Manor certainly has its good points -- most notably the highly-detailed backgrounds, many of which are taken in modified form from the website. Each room is packed with details relating to its occupant. The clutter gives the house a lived-in feel, highlighting the lack of space, and the use of dust and cobwebs in several locations conveys the feeling of age and desertion. The claustrophobic nature of each scene is particularly powerful; besides the general clutter, the corridor walls slant inwards as they move away from the camera. Well-chosen music, meanwhile, complements most scenes effectively.

However, these strong points make the corners cut even more noticeable. You'd expect ghosts to lack life, but the almost complete absence of animation seems odd, while much of the foreground art looks pixelated, with objects that can be picked up jarring with the cleanly-designed backgrounds. Indeed, these often look terribly out of place, with foot-high door keys and guns propped up on tables by the grip. The strangest choice, though, from an artistic standpoint, was to retain the default AGS interface. The simplistic icons on the menu bar, combined with cursors ripped straight from classic Sierra games, look totally out of keeping with the rest of the stylish presentation. The problem is compounded by the removal of other icons, leaving the menu bar with strangely-placed gaps. Given the ease with which AGS enables the user to modify the interface, this gives the impression of complacent design. 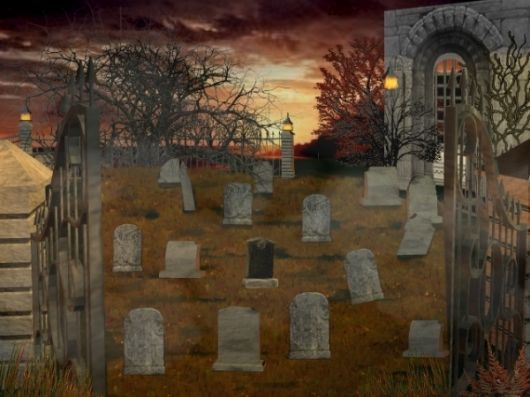 While we're examining the interface, it's worth taking a look at the inventory gained during the game. Now, it's common for adventure game protagonists to carry around a lot of excess junk, but in Hauntings I often felt wearied clicking the tiny down button in the inventory menu for the fifth time in order to scroll to the bottom of the list. This problem, though it may appear minor, is compounded by some arbitrary hotspot choices on the inventory items, so that clicking on the down button with an object selected becomes a chore whenever you want to try combining items.

As if to make matters worse, the protagonist, despite amassing a large stash of swords, pokers, mice and playing cards, refuses to pick up some equally strange items until given a reason. Sometimes the requirement isn't even made clear. For example, when trying to take some money from a deserted house that belongs to me, the response, "This is a neat place to hide money" may be accurate, but certainly isn't helpful. It's always annoying when a player character doesn't realise something already clear to the player, but I was stunned when I had to inform the character that an object was needed by spelling out its name in the nursery using wooden blocks collected from all over the house. The situation is made more galling by the fact that several other items in my inventory would have served the purpose equally well.

In fact, the puzzles in general are illogical, with the writer unable to decide whether a player must handle a ghost by "un-murdering" it (using the item that killed it originally) or bringing it an object that it would quite like. Some puzzles are added for absolutely no reason. One ghost asks you to help him, but won't give you an item required to accomplish this task until you solve a completely unconnected puzzle. That this puzzle is a match-the-cards puzzle involving paint remover (presumably the paint grows back out of nowhere when you make a mistake) merely highlights the strangeness of the situation. 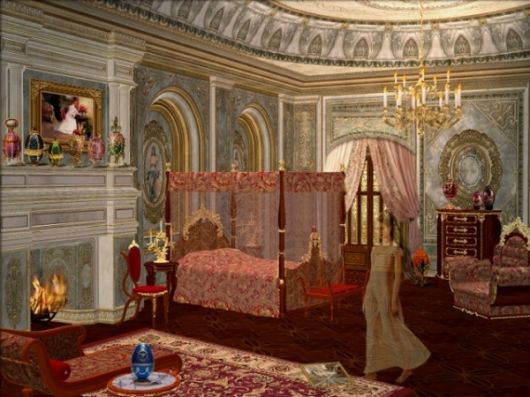 Perfectly usable objects in any given situation are rejected without any response to suggest you were close, leading to the correct object not being tried. This is a particular problem in the last real puzzle of the game, where ten identically named and described items of two different colours must be placed at specific points on the screen, with no indication which colour is applicable. It becomes a little boring when one has to click every part of the screen with each item in turn, in the hope that one will randomly stumble across the required hotspots.

The writing itself is mixed. A lot of thought has obviously gone into the characterisation, with detailed backstories for each spirit subtly pointing the player in the direction of required objects. A depressed character may speak in short, broken sentences. The author has also tried to provide a quasi-Victorian colouring to the words of some of the ghosts ("I took to my bed", "that dastardly coward"), but this is undermined when other ghosts says things like, "Let's play some ball." Sometimes both styles coexist in a single speech; a character described by one spirit "had gambling in his blood" that "ran so thick it was a sickness", but then turns out to have been a "real charming guy" who "shot up everyone in the room". Punctuation is inconsistent and sentences are badly strung together. Meanwhile, the written on-screen narrative is not distinguished from the speeches of the ghosts. While a lack of recorded speech is understandable, the decision not to implement different text colours, or even to place direct speech in quotation marks, is less so. Additionally, the narrative is divided arbitrarily between the player character and an impersonal narrator; or rather, the protagonist is alternately referred to in the first and second person. 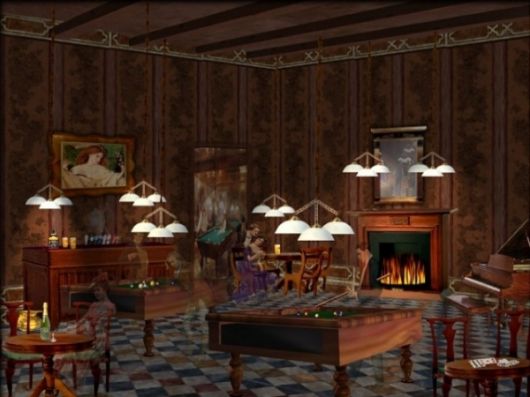 In terms of mood, Hauntings of Mystery Manor seems unable to decide whether or not it is trying to be an engaging psychological piece, as the opening text suggests, or whether it's merely a stroll through a house full of spirits who happen never to have been helped despite all the required objects being easily obtainable. Given that the aforementioned foot-high door key was left outside the front gate, anyone could have wandered through. The token moral decision at the end of the game has no discernible consequences, and the closing set-up line for a sequel, delivered by a character introduced on the last screen solely for this purpose, marks a ham-fisted return to the psychological interest of the game's opening for absolutely no reason.

The author has clearly worked hard on many aspects of the game, and I look forward to seeing what she comes up with in the future. However, Hauntings of Mystery Manor is flawed, and noticeably so. No amount of good intention and pleasant background art can mask the inconsistent writing, illogical puzzles, bizarre plot, and poor foreground and interface art. Had this game been released for free, as the vast majority of AGS games are, it would have been easier to overlook these issues, but a game being sold for $14.95 U.S. (and without a demo version available) demands a more critical approach. That the free screensaver incorporates the best aspects of the game, allowing you to see the background art and listen to some of the music without enduring the many gameplay problems, should tell you everything you need to know. Some players may manage to see past the flaws, and focus on the well-planned backstories in what amounts to a fairly quaint, easy-going diversion that's not without its charms. For most people, however, playing this game will be a frustrating adventure in unfulfilled promise, and that's not something that can ultimately be recommended.

Despite some positive aspects, its many flaws make Hauntings of Mystery Manor a disappointing game that fails to realize its potential.

GAME INFO Hauntings of Mystery Manor is an adventure game by Cindy Pondillo released in 2005 for PC. It has a Illustrated realism style, presented in Slideshow and is played in a First-Person perspective.