We get a small commission from any books sold.
All Bitmap Books
Written by
Patrick Hardy — November 24, 2008

It was inevitable that the Hardy Boys would one day become the protagonists of their own mystery game. After starring in hundreds of books covering more than 80 years, Frank and Joe – coincidentally named and no relation to myself – have become immortalized as crime-fighting teenage sleuths in the tradition of Nancy Drew and Scooby-Doo. And just as those other two franchises have long since made the transition to PC, now the Hardy Boys have finally followed suit in The Hidden Theft. As it turns out, it’s a fairly lightweight debut for the brothers, but it’s got just enough depth and Hardy Boys charm to make the game enjoyable for any player in the mood for a few evenings of mild gaming.

While many have fond Hardy Boys memories of the vintage early stories, Hidden Theft has modernized the boys for the 21st century as wild but good-natured teenagers out to help fight crime, using the current “Undercover Brothers” paperback series as its inspiration. The game is set in contemporary New York State, with all the technological amenities to fit. The brothers are members of “ATAC” (American Teens Against Crime), an organization dedicated to solving mysteries the police can’t handle alone. While composed mostly of young American teenagers, ATAC is a surprisingly sophisticated organization. In the first scene, a fellow employee impersonates a police officer in full patrol uniform to deliver word of their newest case. Later on, the Hardy Boys themselves are able to tap the resources of the police department through their father’s connections there. Of course, along with the use of such modern techniques will be plenty of good old-fashion sleuthing along the way.

In an all-new plot created specifically for the game, the mystery surrounds an unusual theft that occurred in the house of a wealthy former businessman named Samuel Spencer. Millions of dollars’ worth of bearer bonds were stolen from a fortified safe in the Spencer home in a way that suggests the involvement of someone on the inside. In desperation, the family sends for the two boys to assist, and the police seem to embrace their participation, allowing them to delve right into the investigation. While the heist itself is straightforward and stereotypical of the detective genre, the unfolding background of financial intrigue and family dysfunction provides some welcome plot additions that ensures player interest to the end. 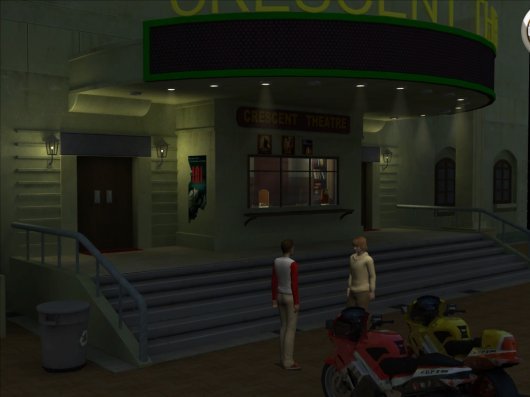 For the most part, the story plays out in a rather formulaic way. Thankfully, this doesn’t detract too much from the game, because the plot has surprising depth. The suspects change the more you investigate, and the evidence takes the story in a different direction than a by-the-book whodunit, and these twists keep up the intrigue and fun. It’s all very light entertainment, of course. This is not a Jane Jensen saga of death and sex and intrigue – it’s the Hardy Boys! Which is not to say that there aren’t points that are serious, but overall it plays out much like the books themselves.

Along with the main mystery, the appeal of any Hardy Boys story is the brothers themselves. Frank and Joe share a strong fraternal bond, but throughout the game they work in juxtaposition as mirror opposites. Joe is the wilder of the two, displaying a tendency for hijinx and crazy antics. Older brother Frank plays the more studious sibling; a strong, charismatic leader who is constantly trying to keep Joe on the task at hand. Players will generally control Frank when the boys are together, but the mystery will require the strengths of each brother, splitting them up as need arises and allowing players to freely switch between the two.

The banter between the two brothers is an amusing element of the game at times, but the substance of much of their dialogue can be a letdown. Sometimes they state the painfully obvious: “200 million dollars! That’s a lot of money!” and other times their lines are a little corny: “What can I say? We were young.” Further, when examining an object, the boys don’t tell us anything meaningful about it. There are innumerable times when they’ll say what an object is but then never provide any helpful insight about it. 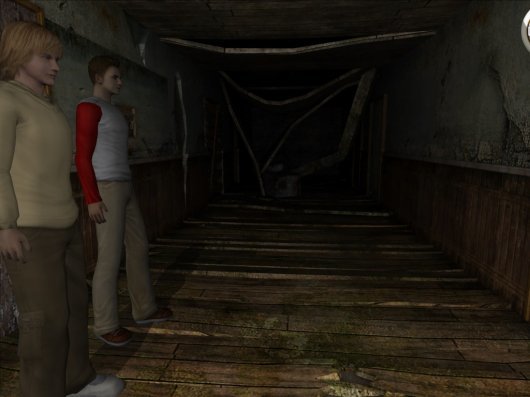 There are roughly a dozen or so other important characters that the boys will encounter in their travels. Many of them fit into clichéd roles, from the angry old millionaire who suspects his lower-income, ne’er-do-well brother to the beautiful daughter who ferociously comes to her father’s defense. Fortunately, the lesser characters in the game, such as Officer Riley, Gus the barber, and Iola the chemist-wannabe, are a lot more interesting in many respects than the main characters, adding a cleverness to the story that would have been missing without them.

From the celebrity-level main characters (Hollywood talents Jesse McCartney and Cody Linley provided the voices for Frank and Joe, respectively) on down to the secondary characters, the quality of the voice acting is realistic and appropriate for the various personalities. Indeed, the Mrs. Hardy of the game has the same scolding, sarcastic tone of voice as that of the very real Mrs. Hardy with whom I grew up. The dialogue sequencing is also solid, as characters remember previous dialogues and expound appropriately on new topics when you return.

Throughout Hidden Theft, players will find themselves taking the Hardy Boys to a mansion with a well-tended landscape, a high school, a hospital, and a handful of other places in and around their home town of Bayport. The realistic pre-rendered background graphics are fairly picturesque in quality, if a little sparsely filled at times. The detail in some scenes means that items you need are indistinguishable at first glance from the other objects, both in placement and in detail. While the smart cursor changes when hovering over hotspots, I found a couple of objects difficult to pick up or interact with simply because they are so densely integrated in the background. One in particular required discerning a single engine part against a background of many wires, motors, and belts. 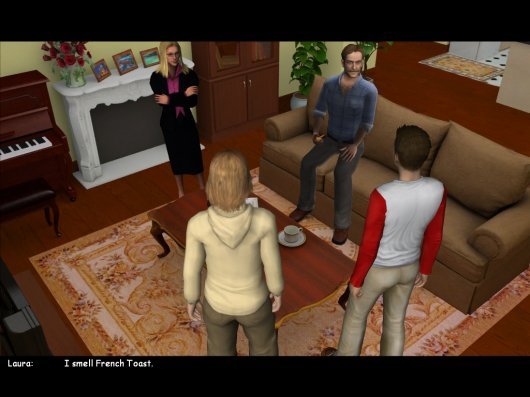 There is a travel map included in the game, which makes it easy to move between major locations in the game, though it isn’t used to move around within the individual locations themselves. For that the traditional point-and-click navigation works as you’d expect to get the boys around, functioning well enough apart from showing off a noticeably clunky movement animation.

Puzzles in Hidden Theft are plenty, and I would put them at moderate difficulty for experienced gamers. Many involve applications of inventory items with other objects, and some are quite creative. At one point the Hardy Boys are asked to chemically construct aspirin from its constituent parts. The stacking of the chemical bonds is not a challenge I have faced since high school, but thankfully is not as difficult as it sounds. There are a few other standalone logic challenges to complete, plus a couple with minor timed elements. That is, certain tasks must be done before a character returns or does something else that would negate the task. While these may take several tries until you know exactly what you need to do, such challenges are not difficult, and since neither of the Hardy Boys is at any risk of death or dismemberment, you can simply keep trying until you get it right.

While you play, the music is suited in tone and style to the light, fun storyline. It doesn’t take itself too seriously, and but adds an additional layer of character to the environments. As is common, the music changes according to physical setting and emotional circumstances. However, it doesn’t intrude on the gameplay and generally stays in the background where it belongs. 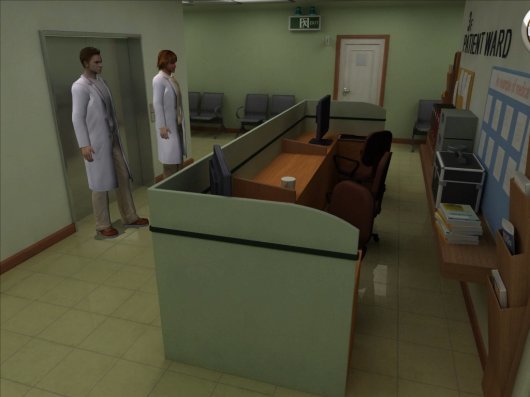 Despite the occasional presentation issues and stereotyped characters, overall The Hardy Boys: The Hidden Theft is an entertaining mystery that will provide quite a few hours of solid gaming. The target audience here is clearly older children and teenagers, but I think many adult adventure gamers will also enjoy discovering who is behind the mystery. Anyone looking for a game of suspense with more mature detective themes will not find it here, but for a short dose of light entertainment between more serious fare, there’s enough here for a worthwhile diversion.

It remains to be seen if the Hardy Boys’ PC legacy can ever rival the ongoing Nancy Drew series, but I hope this isn’t the last we will hear from the brothers. There are clearly some areas that needed more polish in this first effort, but it’s a solid debut that the developers can surely build on. The boys themselves have proven their enduring quality in their novels, and there’s no shortage of subject matter for future mysteries, so the only question should be when, not if. After all, a Hardy never stays silent for long. I should know; I am one.

The first Hardy Boys mystery is definitely geared to the younger crowd, but it has just enough depth to provide some light entertainment for everyone.

GAME INFO The Hardy Boys: The Hidden Theft is an adventure game by XPEC Entertainment released in 20082009 for PC and Wii. It has a Illustrated realism style and is played in a Third-Person perspective. You can download The Hardy Boys: The Hidden Theft from: We get a small commission from any game you buy through these links.
The Good:
The Bad:
The Good:
The Bad:

What our readers think of The Hardy Boys: The Hidden Theft