We get a small commission from any books sold.
All Bitmap Books
Written by
Andrea Morstabilini — September 17, 2008

The original title of Phantomery Interactive’s first (and for now only) adventure, released in North America as Outcry, was Sublustrum, plural genitive of the Latin “sublustris”, which can be translated as “of things dimly lighted”. I can’t really think of a title better suited to describe the game than this, because the journey deals primarily with shadows, pale reflections of reality, and grey, evanescent memories. But while the stuff dreams are made of can be pretty heavy, as Humphrey Bogart once said, Outcry’s lofty pretension obscures its profundity, though it does pose plenty of dimly lit challenge along the way.

There isn’t much of a story to be recounted in Outcry. You’ll play the role of a middle-aged writer who receives a strange, confused letter from his brother, a scientist whom he hasn’t seen for years. Upon arrival at your brother’s home, you will discover that in the past few weeks he missed all his lectures at the local university and began a reclusive life in his apartment, where he was working on a mysterious machine, and then suddenly disappeared altogether. From scattered diary pages and incoherent notes, you will learn that your brother was convinced that human consciousness could be separated from the body and that he was trying to test this “paramount discovery” on himself. Something must have gone wrong, and it’s up to you now to find out his ultimate fate.

The premise is surely fascinating: the parting of body and spirit, the possibility of reliving the past and changing it by a mere act of consciousness, and the inner conflict between the Self and its shadowy doppelgänger are profound and meaningful themes, very rarely seen in the majority of today’s adventures. Drawing heavily on Plato’s theory of Forms as well as on Freud’s arguments about the unconscious mind and Jung’s formulation of personal and collective archetypes, the developers tried very hard to weave a complex philosophical and psychological background, and it’s a shame that, despite their efforts, it falls short of its own ambition. 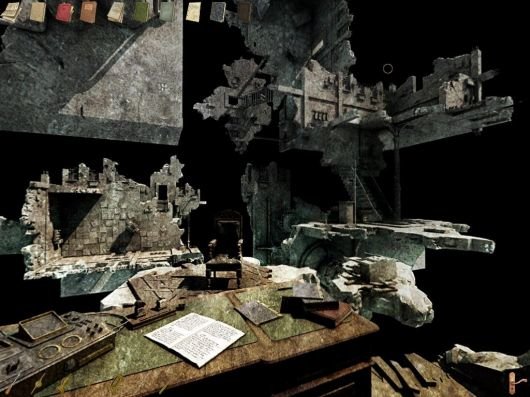 In fact, the intriguing concept quickly becomes an incoherent mish-mash thanks to rough storytelling, done primarily through brief and inane flashbacks, and uninspired, often dull writing. The professor’s motivations toward his experiment are pretentious and his diaries filled with ranting and raving. All the documents you find in the game want so desperately to sound clever and profound that they actually prove to be nothing more than pompous and, in some cases, even ridiculous. While this can be a fault of the translation, which certainly loses something from the original Russian version, it’s also true that there is way too much on Outcry’s plate: the developers tried to mix Freud’s theories with Dolmen archeology, scientific explantion of Self with shamanic lore, different layers of reality with steampunk machinery, and the result is a predictably confused hodgepodge. Furthermore, when dealing with deep philosophical themes, the writing is alarmingly trivial and the occasional mention of Freud or Jung can’t help but feel totally out of place, because the in-game use of their theories about the unconciousness is contrived and overblown.

Worsening the situation, the player’s character – our unnamed and undefined writer – is one of the most shallow and vacuous characters ever seen in an adventure. If it wasn’t for a couple of lines in the manual, and one reference or two in the first segment of the game, we wouldn’t even know his profession, since he doesn’t speak or comment on a single thing. One can imagine that having just discovered his brother’s disappearance, and maybe his death, he would have at least expressed some worry, but the game registers no sign of emotion whatsoever. He looks at his brother’s tribulations with the blank eyes of a stranger and he doesn’t show the slightest sign of personality, even in the few touching moments that the story offers. If the developers were trying to achieve a complete feeling of first-person immersion, à la Myst, they rather accomplished the exact opposite: a detached, emotionless gaming experience which will leave the player totally cold. This happens also because the plot don’t ever surprise. From the first step into the professor’s apartment to the very end, the path is extremely linear, without any twists or unexpected revelations, toward a predictable, paltry ending.

Having said that, the shallow character and the stilted, pompous plot are mere excuses to get you from one puzzle to the next, with a stretched storyline for disguise. From the occasional inventory puzzle to more complex ones involving switches, levers, valves, and buttons, Outcry is a challenging brainteaser, so fans of puzzle-driven games will have plenty of fun with this title. However, the puzzle design varies greatly in quality. The first segment of the game, set in our real world, presents some well-thought, logical tasks which, although always challenging, are never frustrating thanks to the subtle hints that the player can find in books or in the professor’s diary. However, when you enter the Shimmering World – as the realm of the consciousness is called by the missing scientist – be prepared to face some obscure puzzles, made even more difficult by the fact that the result of certain actions isn’t always immediately verifiable, forcing the player to wander through the locations to see if anything was actually achieved. Late in the game, there are a bunch of puzzles based on time travel, and they are among the best I’ve seen in a long time: they are well-integrated in the gameplay, entertaining and thought-provoking. However, I should mention one of the final puzzles, involving gears, sounds and mechanical flowers. If you don’t have a musical ear, like me, this puzzle is almost impossible to complete and I must admit that, after several hours of wandering back and forth between the relevant locations and many desperate attempts, I resorted to a walkthrough to preserve my sanity. 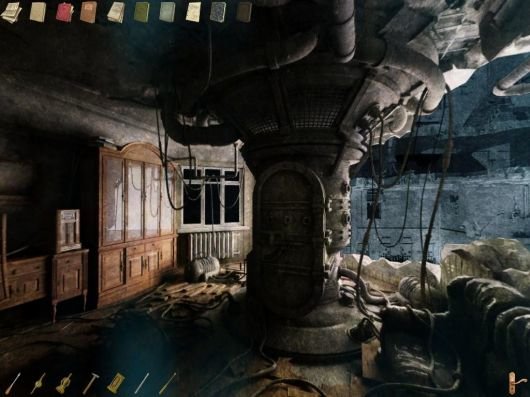 Outcry uses a standard first-person, point-and-click interface to explore the panoramic locations, with a full 360-degree rotation in each individual node. As usual, the mouse cursor changes over hotspots to indicate movement directions or the opportunity to interact with the environment. However, even when such possibilities are displayed, sometimes clicking will result in nothing. This can mean that an object is required (fair enough) or that there is still a prerequisite action to perform. Given that the character doesn’t say a word and that the game will give you no hint on how to proceed in these cases, this design choice is highly questionable because it often leaves the player disoriented and forced to double-check every location and every possible combination. Moreover, some necessary objects and documents are often hidden in the most dark corners of the screens, or placed at the very highest or lowest limit of player’s viewing angles, thus resulting in painstaking pixel-hunting. The murky graphics don’t help, either. Every screen has an opaque, grainy look similar to the damaged film of old movies from the ’20s, with a ubiquitous use of a wide-length lens, which distorts the borders of the screen. Add to this that the light is always dim – as the name Sublustrum clearly indicates – and sometimes even intermittent, with sudden increases and decreases of luminous intensity, and it becomes even easier to miss vital objects.

Aside from obscuring hotspots, however, the graphic design is one of Outcry’s undoubted strengths. Firstly, the use of colour is top-notch: from the sepia, dusty rooms of the professor’s apartment to the ink black and charcoal grey of the Shimmering Wolrd with its Escher-like geometries, each location is lavishly depicted. Every little detail – old framed pictures, faded daguerreotypes, worm-eaten furniture and weathered book covers – is reconstructed with meticulous care, and the documents – if you can ignore the triviality of the content – always appear credible, especially the scientific manuals. Furthermore, graphical effects like distortions, zooms and over-exposure mimic the dizziness and the disorientation of the character (and the player) with striking perfection. For example, during the transitions between screens, the peripheral vision becomes twisted and out of focus, while the light sources like candles or lamps seem to brighten vividly. There are also some nice touches that enhance the unnerving mood of the environments: for example, if you leave your mouse untouched, the camera won’t be still, but will rather slightly wave, as if the character is feeling light-headed. 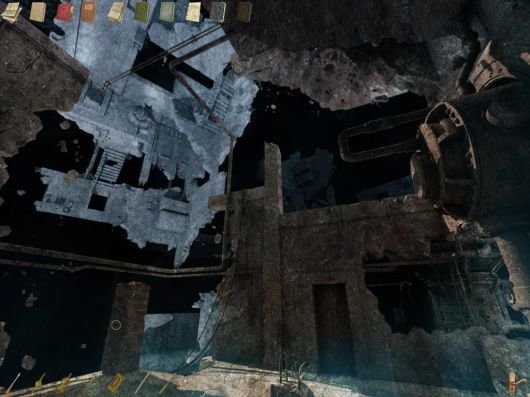 I left the best feature for the end, because the sound department is the diamond point of Outcry. The game is accompanied by a soft piano orchestration, classical and quiet, but sometimes a more subtle, visceral theme surfaces, with gloomy sounds and deep, unnerving voices that remind me of Jocelyn Pook’s work in Kubrick’s Eyes Wide Shut. Late in the game, rock guitars and gypsy drums add a strong, fascinating mood to the orchestration. Sound effects such as footsteps, echoes and water dripping are also top-notch and, with the proper sound system, they can wrap up the player in an very unsettling atmosphere. The voice work, although extremely sparse, isn’t particularly memorable and the professor’s voice is as ranting as his writings, but since you won’t hear it very often, this is a minor complaint.

All in all, with such an intriguing premise and strong production values, the developers had the foundation to make a great game, but the corny plot, pretentious writing, uninteresting characters, and some questionable design issues prevent it from achieving its full potential. The game is also quite brief: it’s unlikely that a seasoned player will spend more than five or six hours to reach the ending, unless becoming significantly stuck on particular puzzles, though that’s likely to happen at some point with the pixel hunting and lack of feedback offered. As it is, Outcry is aimed solely at fans of puzzle-driven games, who will appreciate the challenge as long as they don’t expect anything nearly as meaningful and profound as the game wants to believe it is.

Wasting its fascinating premise with overblown pretension, Outcry is beautiful to look at and listen to, but only for fans of puzzle-driven games.

GAME INFO Outcry is an adventure game by Phantomery Interactive released in 2008 for PC. It has a Illustrated realism style and is played in a First-Person perspective.

What our readers think of Outcry