"He may be a mechanized engine of wanton destruction, but his taste in hideous middle-of-the-road pop music is impeccable!"

If it feels like you just finished playing the last season of Sam & Max, it’s probably because you did; it’s been fewer than six months since the season finale of Season One, and with the success enjoyed by the rebirth of the dog and rabbity thing, it wouldn’t have been surprising to see Telltale Games take a deserved breather and focus on other projects. Clearly, though, there can be no rest for the weary (Max is still President, after all) and so we now have the return of the adventure sitcom that even a writer’s strike won’t be able to kill!

Sam & Max: Episode 201—Ice Station Santa is an opportune game, arriving just in time to ring in the holiday season. And of course, in the loony world of the Freelance Police, the holidays are celebrated by a gun-toting, demon-possessed Santa and his quest to deliver Torture Me Elmer and Four Horsemen of the Apocalypse toys to innocent, impressionable children everywhere—after he finishes dispatching a destructive, crooning robot to level Sam & Max’s office building, and there our story begins. 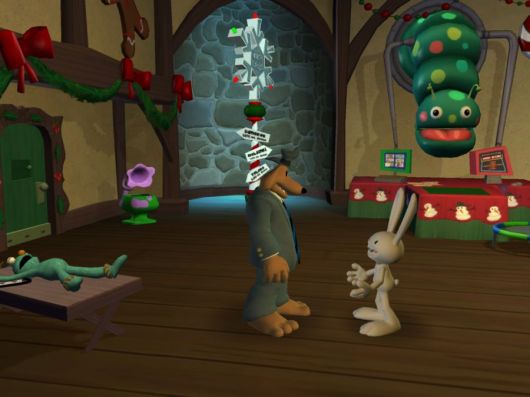 Thankfully free of the awkward mind control thread that the last season trapped itself in, the new season is free to be as absurd and offensive as possible without being tied down by prior story constraints, and this becomes evident within the first ten minutes as the narrative rapidly unfolds. There’s actually a moderately interesting story device behind the jokes and insults; suffice it to say that if the Christmas holiday holds a sacred, special meaning to you, be prepared to have that stripped from you. There’s even an actual plot twist, an unexpected one at that, which takes place midway through the game that serves as an amusing surprise.

"Sam, why am I the only one who associates Christmas with the sound of gunfire?"

The world, as expected, is colorful and beautiful to look at. I appreciated the lack of reliance on old environments; other than the office, every area is either brand new or heavily redone (even the street has some heavy-duty Maimtron-induced remodeling). The music is at the regular standard of excellence, but mixes in a rather demented rendition of “Carol of the Bells” that really brings out the creepy, uncomfortable holiday vibe that only a game in this series could deliver. It stands with the 8-bit retro music from Season One's Reality 2.0 as the absolute best work that Jared Emerson-Johnson has yet produced. 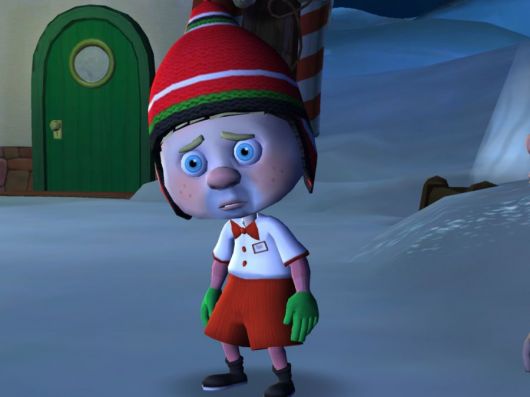 There are a few new features that are worth mentioning as well. In case you are new to the world and picking up the story in the second season, there is a full tutorial which revisits the first puzzle from Culture Shock as a way of introducing you to the interface. There is also a very impressive new opening credit sequence that occurs after some gameplay and really amplifies the “sitcom” feel. Also new is a hint feature with five frequency settings that prompt Max to give you hints based on where you’re stuck at various intervals.

Now that I’ve said that, you’re probably snickering at the suggestion of a need for hints with this series—trust me, Santa’s tommy gun may wipe that smile off your face pretty fast. This is not an easy game. The puzzles don’t aspire to Discworld—thank God, and hopefully the series will never reach those depths—but for a game with about a three-hour playing time, there is a really impressive amount of inventory puzzles and varied fetch quests. The puzzles and mini-quests boast a level of depth that was hardly ever strived for in all of Season One and it is very apparent that this was a point of focus for the developers. The puzzles require an attention to detail and a certain degree of outside-the-box thinking, without any that I would consider to be unfair or too reliant on obscure dialogue or design elements. The game lacks the one knock-down spectacular puzzle that is instantly memorable (i.e. the calendar puzzle from Abe Lincoln Must Die!) but the sum of the puzzle parts is very impressive.

Telltale hasn’t abandoned all remnants of the past, of course. Bosco, Sybil, and Jimmy are all back, and all play prominent parts in the story, though in different ways than they have before. Jimmy also introduces his son, who is laugh-out-loud hilarious. Another new neighborhood supporting character is introduced in Stinky, the diner proprietor, who is neither amusing nor likeable and can hopefully be improved in future episodes. Also returning for cameos: the incredibly entertaining C.O.P.S. and the insufferable and apparently un-killable Soda Poppers. The supporting characters will always be hit-and-miss to an extent, but when Telltale gets them right, they really shine. 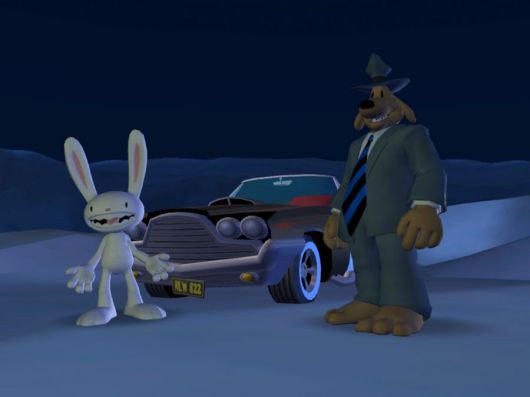 "We can't let Thanksgiving get the upper hand!"

If you have any concerns about the story twisting itself into another awkward knot and forcing the rest of the season to fit into an over-arching storyline, that appears to not be the case; this is a fully self-contained episode that starts well and ends even better, with a fun climactic battle sequence and a great final dialogue from Max. The ending wraps a nice, pretty holiday bow on the entire presentation and underscores how excellent this episode truly is.

You’d hate to think that a franchise this wonderful could get old, but I admit I was a bit hesitant about writing my eighth Sam & Max review in thirteen months—there’s a constant possibility of reaching a saturation point, and then it would be a matter of beating a dead horse (which is certainly something Max would appreciate, but not the gaming public). The only way this possibility can be alleviated is constantly revisiting the story quality and depth, the difficulty, and seeking new ways to inject energy and creativity into the technical aspects. Telltale appears to be fully aware of this, and Ice Station Santa succeeds in all of those areas in an admirable way and sets the stage for what should be another splendid season of episodic lunacy. If you haven’t jumped onto the bandwagon yet, you are doing yourself a disservice by missing the best comic adventure games in the modern era.

Just slightly below Reality 2.0 on the list of great episodes; it’s laugh-out-loud funny, with very intelligent puzzle design and a totally demented self-contained story which interjects demonic possession into a sacred holiday. An absolute must-play.

GAME INFO Sam & Max: Episode 201 - Ice Station Santa is an adventure game by Telltale Games released in 20072007 for iPad, Mobile (Other) and PC. It has a Comic cartoon style and is played in a Third-Person perspective. You can download Sam & Max: Episode 201 - Ice Station Santa from: We get a small commission from any game you buy through these links.
The Good:
The Bad:
The Good:
The Bad: