We get a small commission from any books sold.
All Bitmap Books
Written by
Josh Roberts — September 4, 2003

Sierra On-Line’s King’s Quest VII: The Princeless Bride is, in my mind anyway, the final game in the best-selling series. The series deviates to hack-and-slash 3-D in the eighth installment (Mask of Eternity), and while it leans perhaps a little too far in the other direction in King’s Quest VII—which plays like an extended Disney cartoon—it at least maintains the sense of innocence that is the series’ hallmark.

The story focuses on the royal family of Daventry, and as with the fourth installment, you control King Graham’s daughter Rosella for much of the game. When Rosella is lured into a magical pool, Queen Valanice jumps in after her and winds up in an enchanted land far from home. You open the game as Valanice, and switch to Rosella in alternating chapters. I’ve always liked games that alternate characters and weave differing storylines together, and King’s Quest VII does a nice job making both stories interesting. Each chapter ends on a cliffhanger, which gives the game a sense of urgency as the story moves toward its conclusion.

Bit by bit you discover the reason why Rosella was transported to a magical realm called Eldritch, and as the story unfolds you must unite mother and daughter before doing battle with the evil enchantress Malicia. Along the way you’ll travel through dark forests, underground lairs, cloud kingdoms, and more strange and visually interested areas. You’ll meet trolls, dragons, and an assortment of strange and amusing creatures as well. 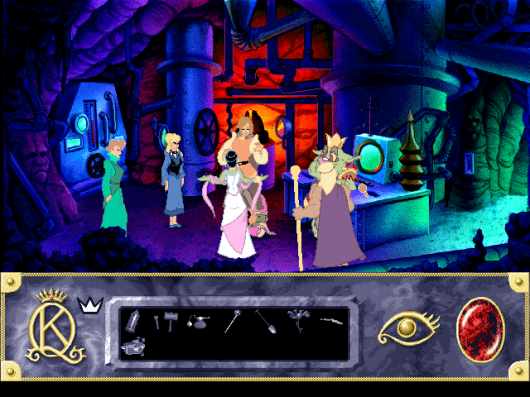 The Princeless Bride is probably the most family-oriented adventure in the entire series. Coming directly on the heels of King’s Quest VI—which is probably the most grown-up game in the series—the move back toward fairy tale themes and “cute” graphics might be irritating. But while the game clearly tries to appeal to a younger audience, it has enough twists and puzzles to satisfy teenagers and adults (this adult, anyway) who crave a traditional graphic adventure.

The gameplay itself is enjoyable and occasionally challenging, but the graphics are the game’s true claim to fame. With beautiful backgrounds and seamlessly animated characters, you’ll feel as though you’re immersed in a fully functioning cartoon world. Add the high-quality voice acting—particularly for the lead characters, Rosella and Valanice—and the game is a success. 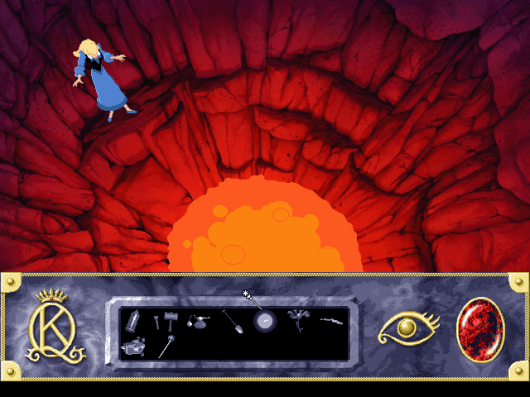 Fans of classic graphic adventure games who don’t want to fight with monsters every few minutes will enjoy the game on many levels. The puzzle design is solid and not as obscure as in some previous King’s Quest installments. Tone-deaf gamers beware, however: There’s a Loom-like puzzle near the very end that requires players to imitate a pattern of musical notes to advance to the next area. After hours of trying, I finally had to enlist the help of someone a bit more musically inclined to complete the puzzle.

Those looking for something new or revolutionary will have to look elsewhere, as this game wasn’t either of those even when it was first released. And yet, even for all its lack of ambition, it maintains a sense of fun and wonder that is hard to find in today’s adventures. It’s a true flashback, and a solid—if not stellar—entry in the King’s Quest collection.

WHERE CAN I DOWNLOAD King’s Quest VII: The Princeless Bride

King’s Quest VII: The Princeless Bride is available at:

An eminently playable, if not revolutionary, adventure game.

GAME INFO King’s Quest VII: The Princeless Bride is an adventure game by Sierra On-Line released in 1994 for Mac and PC. It has a Stylized art style and is played in a Third-Person perspective.