The Fool and His Money

Magnetic: The Game of Games

Magnetic is the second independently developed adventure from Australian Peter Hewitt, the creator of Xiama--and just like his previous game, this time the tag of "adventure" may be stretching it just a bit.

Xiama was a puzzlefest, pure and simple, and if you loved tons of puzzles of great variety strung together with little to no storyline or relevance, it was a game for you. This time around, Magnetic is subtitled as "The Game of Games." Which is not to say that we're talking about the ultimate adventure to end all adventures; that would clearly be a misnomer. Rather, Magnetic is a game in which, to be successful, you have to be really good at games.

There is no introductory sequence other than the title screen; instantly you will be taken to a screen where you choose from one of six "companions" who will join you. There is no difference between any of these; they serve only as six different auto-save slots. Once you pick one, you'll need to pick the same one next time you boot up the game to continue your progress. Likewise, if you wish to restart (or if another family member wants to play) all you need to do is pick a new companion. The companions have their charm; there's Pentar, the mechanical bird, Ringo, the mechanical butterfly, and Klops, the mechanical nose-ringed cyclops-head. I would have liked to see a bit more variation between the characters--I mean, you'd expect the cyclops to be a bit more rough-edged than the butterfly, right?--but that is simply not the game's focus. 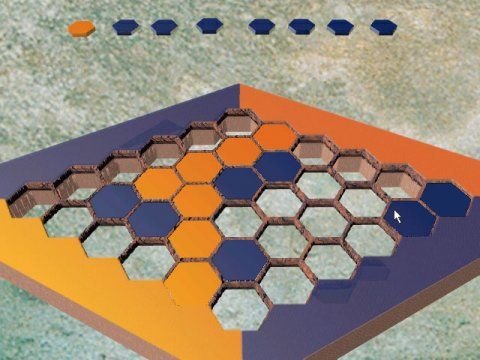 Once your companion is selected, you'll find yourself looking upon the still-frame of a beautiful body of water, and your companion's face will light up the bottom-left corner of your screen. He supplies you with a bit of introductory information; consider this your manual. Navigation around the island takes place through the clicking of arrow icons in the bottom-right corner. A couple clicks will take you to your first challenge: a beach version of the Game of Nim. For those unfamiliar, a certain number of items is placed on the game space, and then each player can take one, two, or three items. The player who takes the last item wins. Yes, it's harder than it sounds, especially with the brilliant Magnetic AI that anticipates every move expertly and plans far ahead. However, there's a twist here: you can choose at the beginning of each game whether you or the computer will play first. This means that once you know what you're doing, you can pretty much win every game; it's figuring out the strategy that takes a long time.

And that's pretty much the story of most of the sixteen Magnetic games, all of which (other than the first one) are either original creations of Hewitt, or heavily-modified versions of semi-familiar games, and almost all of which are super-fun. There is a strategy to all of them, often a hidden trick that you have to puzzle your way towards before you can even begin to win. The AI is unforgiving; it is expertly programmed and wickedly tricky, and to make matters worse, you have to win each game eight times before you've "defeated" that opponent. Actually, that's not altogether true: you may have to win much more than eight if you can't win consistently. The "scoreboard" consists of eight slots that will be filled as games are won. Your wins will start filling up from the left; the computer's, from the right. Once more than eight games have been played, it's a matter of pushing your way towards the other side. Example: if you've won five, and the computer three, and then the computer wins again, it's now 4-4. Another computer win, and it's 3-5. So even though you've already won five, you'll have to win five more, and that's assuming you don't lose again. If the computer makes it all the way to 0-8, you aren't dead; you just have 0 wins and you're trying to make it 1-7.

There will be no instructions given to you before any game, and more often than not your goal is not all that obvious. There are two elements in place to make things easier: first, your happy little companions will pop up with some advice, sometimes vague and sometimes direct. In some games, they'll give you help as many as four times, but they won't show up until you've proven yourself suitably incompetent at the task at hand. The other nice touch is that the computer can't get past the halfway mark on the scoreboard until you've reached it yourself; in other words, the computer can beat you the first hundred times you play and it won't notch more than four wins. Once you reach four wins, though, it's on. 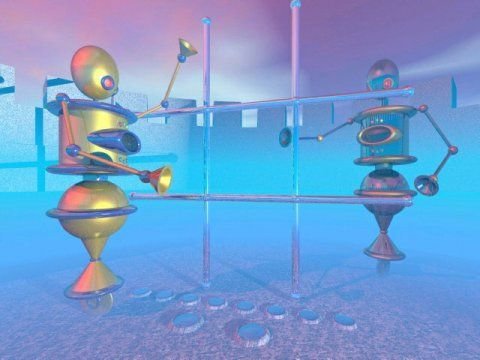 As you win games, more sections of the island will be open; you'll find it is worth your time to keep a map, because the photo slide-show movement doesn't exactly feel intuitive, and you'll be retracing your steps needlessly quite often. In order to "unlock" most of the games, you'll need to complete a puzzle, and these puzzles are straight out of the Myst/Xiama mold. Sound puzzles, word puzzles, color puzzles, the Eight Queens...puzzles galore, just in case you get tired of the whole "game" concept. Once you've defeated the computer in three games, you'll be able to instantly teleport to any game you've unlocked, which is quite convenient.

I did not finish Magnetic; out of the sixteen games, I unlocked thirteen and defeated the computer at eight. Some of the games I found were absolutely addicting; some of them were not quite so interesting. For the most part, though, I enjoyed all of them. I certainly enjoyed them more than I enjoyed the puzzles, which I found obnoxious more often than not. And winning the games will have to be its own reward; the silly little art shows that follow each win are absolutely pointless. 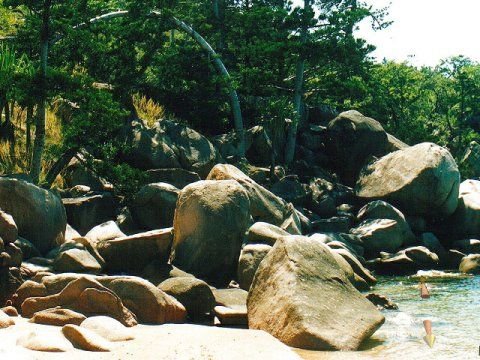 You certainly know by now if Magnetic appeals to you. There's really no story, no compulsion to continue other than the burning sense of competition bringing you back to the game that you just can't seem to win. Lots of puzzles, and lots of games, all of which are very fun and all of which are brilliantly programmed. Still, I found it very easy to jump back into the game for half-hour periods once or twice every day, because it's extremely accessible (and runs quickly, since it's not taxing your system resources). I wish the rewards could have been a bit more...rewarding, and I wish (game wuss that I am) that a little more help was available. But I definitely enjoyed Magnetic for everything that it is, and it earns a solid recommendation. I can at least say with certainty that, although it may not be truly the "game of games," I won't play a better game like it for a very long time.

(Magnetic is available online at Hewitt's website for $33 US, with prices in other currencies available on the website. Players will also want to be sure to check out the official forum, which adds a lot to the playing experience. Also, Hewitt is working on German, French, and Spanish versions of the game; keep an eye on the game's forums for more information.)

The originality and addictiveness make this a quality gaming experience--but definitely not for everyone.

GAME INFO Magnetic: The Game of Games is an adventure game by Mulawa Dreaming released in 2003 for Mac and PC. It has a style and is played in a None perspective.

What our readers think of Magnetic