For American adventure gamers, Runaway has been a constant source of intrigue and drama, and not because of the actual content of the game. For almost two years, we’ve heard all about it, how beautiful it is, how well it plays, what an instant classic it is. But it’s only been hearsay, as the game stubbornly refused to find its way to an English translation. GMX Media, seemingly, stepped up to the plate and promised an English translation, to be released in Europe in February of this past year. That date came and went, and was pushed back a few times, until the date became “Indefinite” and GMX stopped answering our e-mails. Rumors persisted that the game wouldn’t be picked up in America due to issues with the World Trade Center towers being shown in the opening credits.

Finally, when we were as frustrated as we’d ever been and almost given up hope, the wonderful folks at Tri-Synergy, who brought The Longest Journey to our shores after some speculated it would never find its way here, announced they were about to rescue another high-profile adventure.

The verdict? Runaway: A Road Adventure is the first true adventure classic since the aforementioned TLJ, an extraordinarily beautiful and compelling game that recalls absolutely everything we have always loved about classic adventures. It is at once a glorious salute to the Golden Age, and a bold declaration that this sort of adventure can not only survive, but be relevant in this era of gaming. 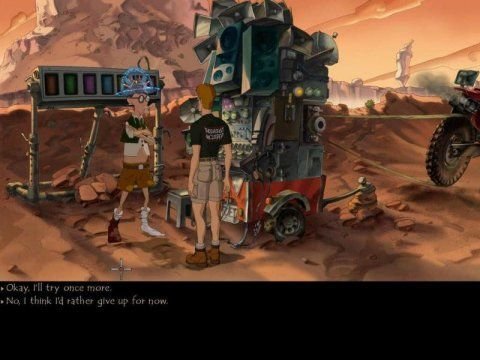 Runaway does away with the more fantastical elements of recent high-profile adventures, cementing itself firmly in normality before making slight left turns into escapism. You won’t find any parallel universes, or robotic train engineers; you will, however, find a geeky twentysomething about to road trip across the States from Manhattan to California on his way to grad school. Before he kicks off the trip, he decides to run a quick errand downtown—and ends up hitting a young girl escaping an exotic club with his car.

Now, it doesn’t get much more normal than that, right? Especially when our hero Brian meets the three drag queens who help him hatch an escape plan later in a game. Or when his companion stripper reveals the true reason that these murderous thugs are chasing them across the country. Or when he has the Rastafarian in the abandoned Old West town cook up a batch of ganja sufficient to lower his consciousness in order that he can act as a medium in a séance. Hmmm…so maybe there is an element of the surreal in this game. But one of the most ridiculous things I’ve heard in criticism of this game is “I just didn’t believe the story could really play out that way.” For crying out loud, shut off your PC and watch the History Channel. Name me an adventure that “really could have played out that way.” I play adventures to escape, to experience things that never could really happen. Runaway is accessible and generally believable, firmly rooted in an environment we can relate to, but delightfully farfetched and escapist at the same time.

Technically, the game is extraordinary. The graphics are absolutely gorgeous, and the animation is sometimes breathtaking; not just the cut-scenes, but the normal in-game actions are just delightful to watch because of the skill in the graphics. That is all keeping in mind that this game is approaching its second anniversary of original release, and still looks better than anything out there. The game features a full original soundtrack, including the song “Runaway” by a band called Liquor—think the Cranberries with a bit of dark techno. The voice acting, provided by AudioGodz, is nothing too special, but serviceable. The interface is extremely simple and intuitive, and it is clear Pendulo’s goal was that the gamer not become frustrated playing this game. 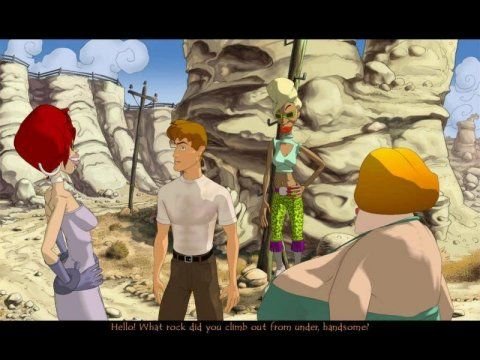 No expense is spared to tell the story well; the game’s pacing is what can probably be described as “leisurely,” and there’s not as much of a sense of urgency as in Broken Sword, which is definitely the natural comparison for style and feel. The action is all in the cut-scenes, which can sometimes exceed fifteen minutes. There are no timed puzzles of any sort, and no way to die.

The puzzles are truly excellent, and part of it is the intelligent way the game is programmed. Generally, when Brian picks up an item, or looks at it in inventory, he will describe it in a way to give the player a push as to what it might be used for. He won’t spell it out, but puzzles that would normally fit under the “how could I have thought of that?” category are alleviated by his small hints. This brings a perfect balance to the puzzle difficulty, one of the best in recent memory. The game also adds an interesting element; sometimes Brian won’t pick up an object until he has a good reason to. Imagine that, a rebellious player character! An example: midway through the game, Brian finds the corpse of a doctor, with a doctor’s bag next to it. Brian refuses to go through it because, well, it’s disgusting. You would too, right? He won’t actually open the bag and paw around until he realizes that a doctor’s tool is necessary to complete a puzzle. And here’s an amazing thing: the main character actually changes his clothes midway through the game – and it’s not part of a puzzle! I can’t believe that changing clothes qualifies as out-of-the-box thinking, but it’s about time a game other than Grim Fandango gave this a bit of attention. These sorts of idea embrace the notion that yes, there’s room for adventure games to grow, we don’t have to adhere to every past convention in order to retain a “classic” feel.

The icing on the cake is the ending, one of the longest and most satisfying in a very long time. There’s a cinematic excellence to the introduction, the cut scenes, and the ending, all hearkening back to the best of Tim Schafer, and I do not say that lightly. 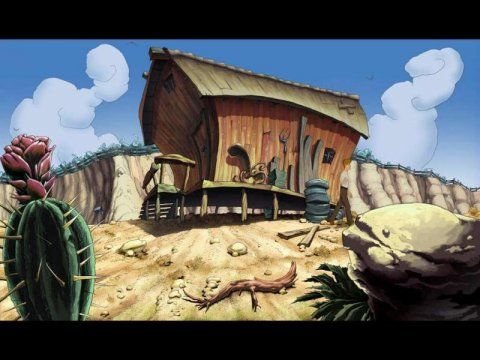 Runaway is a bit shorter than Broken Sword, and definitely shorter than The Longest Journey, but should provide a bit more satisfaction for those who felt that Syberia was too easy to breeze through. The balanced puzzles will provide some challenge and encourage some thought with minimal hair-pulling. I would guess than an average gamer will take 13-16 hours to complete Runaway, and about an hour of that will be watching cutscenes. You know if that appeals to you or not.

At once, Runaway embraces everything about classic adventures: the moderate pace, the barrage of dialogue, the surplus of inventory items, the array of puzzles; while at the same time making the bold statement that there are still new things that can be done, new directions to go for the adventure game, new ways of implementing thought and logic. The story is just bursting with life and energy, and in the end Runaway is just a really, really fun and satisfying adventure.

So, since I’m the jackass who actually purported to make some sort of definitive statement ranking the top 20 adventure games of all-time, the question naturally follows, does this game have a place on that list? A second playing will have to take place before I can answer decisively, but right now the answer is, Runaway is absolutely one of the top twenty adventures ever. If not for the slightly abbreviated length, and a bit of a dead spot midway through the fourth act, I would have no difficulty fitting it into the top ten. This is a brilliant game, an incredibly beautiful and enjoyable adventure with a story that is both accessible and escapist, and the first true must-own adventure in a very long time. And to think that I almost never had the chance to play it.

Runaway: A Road Adventure is available at:

There's no way around it: Runaway is an instant classic, and an absolute must-own for all adventure game fans.

GAME INFO Runaway: A Road Adventure is an adventure game by Pendulo Studios released in 2003 for iPad and PC. It has a Comic cartoon style, presented in 2D or 2.5D and is played in a Third-Person perspective.