Ben "Yahtzee" Croshaw is no stranger to the underground gaming community. His Rob Blanc trilogy and The Trials of Odysseus Kent were well-known for their unique brand of dark and bitter-edged humor. So when I started up his latest opus, 5 Days a Stranger, I thought I had a vague idea of what to expect. I was wrong. As soon as I saw that mysterious, silhouetted figure driving a car down a lonely road in the English countryside - accompanied by soft, haunting music - I knew I was in for something different.

You are Trilby, notorious cat burglar, armed with a set of lockpicks and a grappling hook shaped like an umbrella. Despite his natural inclination to rob any home blind, Trilby is a gentleman. He is polite, well-mannered and impeccably dressed. His on-the-job uniform consists of a neat pinstriped suit with a matching hat (a trilby, naturally). His current mission is to case out the vacant DeFoe mansion, liberate any valuables left behind, and leave. Sounds easy, right? Unfortunately, an unseen sinister presence looms over this house, preventing Trilby and its four other occupants from leaving. To say more will ruin it, but I will say that the game does not disappoint in the storytelling department.

Since the author is more concerned with atmosphere and story than puzzles, you won't have to worry about straining your brain too often. Not to say that you won't get stuck once in a while. There are some moments where you are left wondering what to do next, but a quick look around the house should point you in the right direction. Pixel hunting is kept to a minimum, except in one instance where you need to search a bookcase for the one specific book that you need. 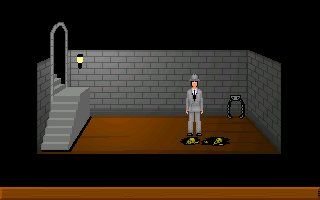 It is rare that an adventure game is character-driven, and 5 Days attempts to do just this. For the most part, it succeeds, but falls just short of the mark. The NPCs, when you meet them, seem like potentially interesting people, and they each have their own ways of dealing with the crisis. The treasure hunter digs in the back yard. The level-headed TV journalist does research. The morose teenager sulks and escapes into a book. It's nice to see an adventure game where the NPCs aren't mere fixtures waiting for the main character to come along. In that respect the game succeeds; ultimately, however, the player is left wanting more. Very little time is spent on developing these characters. There is so much I wanted to discuss with them, but was never given the opportunity to. For example, at one point Trilby discovers something horrifying. I instantly walked over to an NPC to tell him about it, but was only given the option to ask "So how are you doing?" This might seem like a small point to harp on, but in a character and story-driven game it takes away from the experience. Some more time spent on character development and dialog would have made this game truly shine.

The graphics, while simple, do the job. A heavy application of photoshop filters adds some nice touches here and there. The rooms inside the mansion are small and create a nice sense of claustrophobia and an off-putting sense of wrongness. There are some cut scenes which are smoothly animated and delightfully gory. A special shout-out must go to the character sprites. They are highly detailed and their walk cycles are top notch.

Music is limited to specific scenes in order to increase dramatic tension. The tunes are not original (the author admits to using public domain midis), but they are well chosen and fit the tone very nicely. Unfortunately, there are no sound effects. In a game so well-planned and detailed, the lack of sound effects seems like a strange omission. [note: This has been fixed in a recent release of the game]

Despite some flaws, this game is well worth your time. If you're looking for an intriguing story with great atmosphere and some genuininely frightening moments, you can't go wrong with 5 Days a Stranger.

(5 Days a Stranger can be downloaded for free at Yahtzee's website.)

What our readers think of 5 Days a Stranger

A short but well made game

"5 days" is a nice little horror adventure. Five people are locked together in a mansion with colorful history, looking for a way out. A murderer starts picking them off one by one, and it's... Read the review »