We get a small commission from any books sold.
All Bitmap Books
Written by
Stuart Young — August 10, 2007

When I first happened upon the attractively designed case for Jack Orlando: A Cinematic Adventure, I got an instant little surge of excitement. Had I perhaps discovered a true classic? A hidden gem? I'd never heard of the title before, but that doesn't preclude a game being good, right? The cover art and the screenshots looked great; an attractively designed mix of cartoon animation and hand drawn backgrounds. The 1930s pulp detective setting instantly appealed, and the promise of being a "Director's Cut" version with new puzzles and backgrounds sealed the deal. I walked away five pounds poorer and one bizarre little curiosity richer.

Why so bizarre? That will require some elaboration, because Jack Orlando turned out to be one of the best-worst games I've ever had the privilege to play. It's an enormously uneven production, and one that provokes mixed feelings of fondness and frustration. The set-up is simple but sound; washed up private eye Jack Orlando is coming home from an all-night bender when he stumbles upon an altercation in an alley. The formerly heroic detective tries to help, then wakes up with a headache, a corpse, and a couple of unfriendly cops to talk to, who are more than ready to jump to conclusions. It's not all over for Jack, though, as an old friend from the precinct gives him forty-eight hours to clear his name. I'm pretty sure that's not how bail works, but in a genre where it's even odds that the Knights Templar are involved somehow, I'm sure we can let that slide.

What you may find less tolerable, however, are the utterly dire translations and mediocre-to-terrible voice acting. Jack Orlando was quite obviously not written by English speakers or, it would seem, translated by native English speakers either. This is demonstrated by everything from bizarre character interactions, odd phrases and nonsensical non-sequiturs to what I assume are badly translated idioms. "Hmm, this is a heavy one", remarks an unintentionally amusing Irish cop on discovering the corpse is a Major in the US military; perhaps he is referring to the man's importance, rather than his weight? And that occurred within the first five minutes. Later on you'll be having extremely angry conversations with characters you've only just met, and listening to poor old Jack spout gems like "a guy could do something good with that!" in an excited voice every time an inventory item isn't used correctly. The conversation structures are admirably detailed, often giving the player plenty of genuine dialogue options. Unfortunately, you won't want to listen to any of them or read the horrible translations. No wonder the voice actors do such a poor job, placing emphasis on odd words and putting on terrible foreign accents (in addition to the Irish cop, there are Chinese and Italian accents that have to be heard to be believed.) The female characters and their voices are even worse. Even the opening voiceover is read in a tone of campy hyperbole. 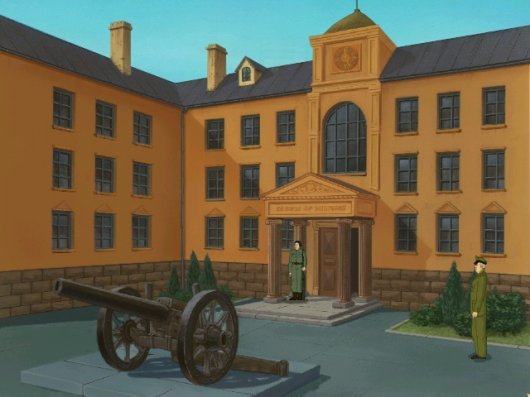 Thankfully, the beginning of the game impresses as well as offends. The traditional cel-animation is sharp and generous, although the character animations are choppy and the opening and closing cut scenes look a lot rougher and more amateurish than the game itself. The backgrounds are also, for the most part, nicely painted. Little animation details like flapping paper, characters walking past and the three-dimensional cars show a painstaking level of care and really enhance the appeal, as does the gorgeous game map complete with animated traffic. A particularly impressive detail is the little round-framed close-up shots of Jack which appear when accomplishing significant actions. This neat device adds a nice little reward every time the player solves a puzzle.

Which leads me on to one of the game's principle failings: the puzzles, such as they are, are often totally illogical. I am not exaggerating. We're all used to a tad of "cartoon logic" or obscure clues, but Jack Orlando really does take the prize for bad design. It truly feels like the company (or companies, as it seems there are about ten different brands associated with developing and publishing this game) responsible spent all their time and resources on the animation and added a game as an afterthought. In fact, it's practically a textbook example of how to frustrate a player. Pixel hunting abounds, along with dozens of inventory items, most of which are totally useless, as are many locations and characters. This helps increase a feeling of immersion in the world, especially in the "Downtown" episode, the longest and most enjoyable segment, but it also feels like an enormous waste of time and a brazen effort to artificially increase the length of the game, which would otherwise be very short. Add to this a generous helping of event-triggers that don't pay any regard to cause and effect (items appear as if by magic) and mind-reading behaviour (Jack spends the first part of the game trying to obtain a crank handle for reasons which are only clear when he has it) and you have a perfect recipe for frustration.

As much as I try and avoid using walkthroughs, with this game I would recommend playing with a print-out or not at all. Other choice oddities include characters that want something in exchange for an item, but never give you any sort of hint of what they want. Further, you'll spend a lot of the game in a pretty free-roaming environment, but with no clue where you should be investigating or even what your objectives are. At one point, you pass a bar but can't go in until a bit character mentions it. The bar has nothing to do with the investigation, simply acting as a location for an inventory item. Both dead-end and trial-and-error death sequences also make guest appearances. I cannot emphasise enough how totally appalling the design of this game is. 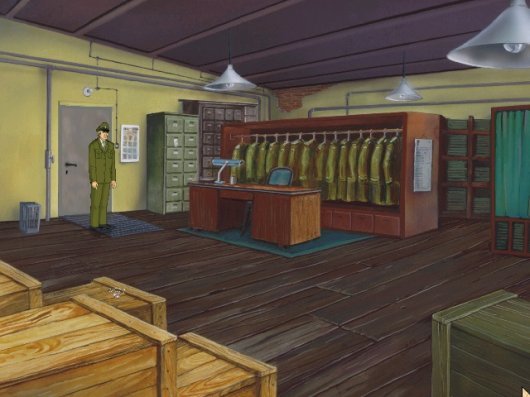 The game's interface does not improve matters. Whilst using a classic point-and-click style with a variant of the "verb coin" approach, actions like "shooting" are virtually redundant as they are used so rarely. The animated cursors for each action, though pretty, have hotspots that are very hard to perceive. The mapping of the inventory button to the keyboard only was also a mistake; the manual claims it can also be activated by moving the cursor to the top of the screen but this never seemed to work. Having to re-select inventory items for each use also became a chore.

Whilst your blood pressure might rise from the awful gameplay, it will hopefully be calmed a bit by Harold Faltermeyer's smooth, jazzy score. Mr. Faltermeyer, as the box eagerly proclaims, is the man behind the Beverly Hills Cop and Top Gun themes; not perhaps the most obvious choice to score a prohibition-era detective game, but he did the job well. Although the loops can sometimes get a trifle repetitive, the music is impressive in its professionalism, putting the voice acting and script to shame. Other positives include the fact that, bizarre happenings aside, the basic plot holds together in a functional manner, concludes satisfyingly, and there is a notable absence of supernatural happenings, conspiracies, super-weapons, aliens or even the good old Knights Templar.

However, it would seem we couldn't have a down-to-earth historical tale of corruption, greed, and heroism without at least some surreal fantasy intruding. One area of the game, which forces its way firmly into the "so bad it's brilliant" category, has Jack discovering medieval catacombs below an abandoned building. In 1930s America. Jack randomly stumbles upon these Broken Sword-style dungeons, then exits through a bizarre cafÃ© which looks exactly like the "Kickstand" bar from Full Throttle. I won't spoil any more of this sequence for you, but it genuinely surprises me that so many people could be convinced it was a good idea for long enough to make it. Perhaps this was the much heralded "Director's Cut" content and they simply had a few backgrounds left over from another game? Maybe they just grabbed the work-experience kid's art portfolio and decided to let him shine? Or maybe they just got really, really drunk, in keeping with the game's preoccupation with bootleg liquor (there are at least three alcohol-for-item exchanges in what is essentially a pretty short game). Let me just remind you; medieval catacombs, in 1930s America. 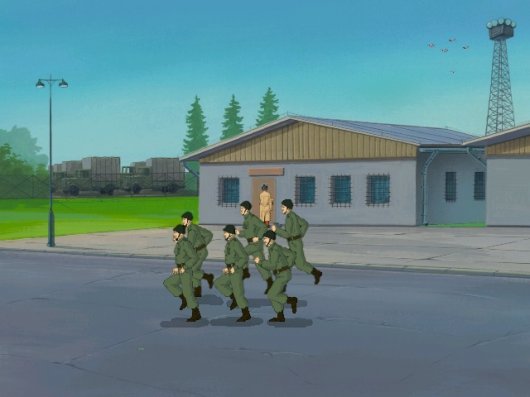 The last major part of the game, which takes place on a military base, is rather incongruous with the tone of the rest of the production, although at least it makes some sort of sense. It also has more redundant elements than the rest of the game, and that's saying a lot. At least the ending, whilst brief, is more or less sensible, although the credit sequence looks like more time was spent on it than the end cutscene. The plot is -- and perhaps this is a blessing -- pretty simple, and even the script and the gaping illogic of the whole thing doesn't manage to completely ruin the game. It's hardly an epic, but there's a definite satisfaction to be gained from seeing it through.

Jack Orlando: A Cinematic Adventure is a game that's hard to assess an "overall" rating. Whilst there are some truly special production values and meritorious ideas trying to escape here, the abysmal design, translation, and voice acting pull it down. To say this game is mediocre, or disappointing, or average simply doesn't do it justice. There's nothing "average" about it; just a mix of wildly varying and inconsistent elements. By the end of it I had become rather drawn to its hapless protagonist and charmed with all the little idiosyncrasies, but if I am to recommend it to you, it comes with a pretty strong note of caution that it is both brilliant and atrocious by turns, and probably best enjoyed with a walkthrough in one hand and perhaps a bottle of Jack's favourite bootleg whisky in another.

WHERE CAN I DOWNLOAD Jack Orlando: A Cinematic Adventure

Jack Orlando: A Cinematic Adventure is available at:

Whatever improvements the Director's Cut made over the original, it certainly wasn't in the gameplay. Jack Orlando has its moments, but its badly designed puzzles and a worse script should keep most players away.

GAME INFO Jack Orlando: A Cinematic Adventure is an adventure game by Reality Pump released in 20011998 for PC. It has a Illustrated realism style and is played in a Third-Person perspective.