We get a small commission from any books sold.
All Bitmap Books
Written by
Tom King — November 20, 2002

In the interest of creating a non-biased review experience for you, dear reader, I will save you the sordid details of my technical trials with this game. Having previously been unsuccessful in repressing the blind rage that sent me streaking through the neighborhood with “Law & Order my a**” emblazoned across the two respective cheeks of my gluteus in red Sharpie relief, I will now exercise the tolerance and will-power I’ve come to develop over this last month, and bring you the positive aspects of this experience.

However, if I have to hear the slap-bass of the Law & Order theme one more time, I think I myself may end up in a court of law, being prosecuted for some heinous crime for which I have no clear memory.

Now, the counseling and Paxil is helping, so let’s talk about the game. 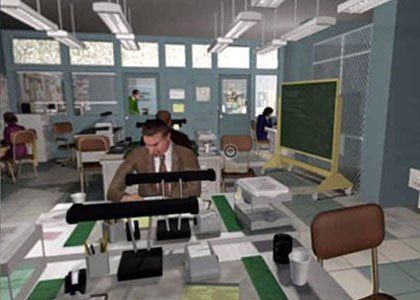 For starters, I had never seen an episode of L&O prior to playing this game, and have yet to see a single one. Therefore, I have no frame of reference in comparing the game with the series. I’ve no answer to whether being a fan of the series may have sullied an honest review or not, but if a view from neutral ground is in order, read on.

In Law & Order: Dead on the Money, Legacy Interactive is touting a 3D mystery featuring the voices of Jerry Orbach (Detective Lennie Briscoe), S. Epatha Merkerson (Lt. Van Buren) and Elisabeth Röhm (Assistant D.A. Serena Southerlyn), as well as a few others that have appeared on the show. Having the actors reprise their voices for these characters adds to the game’s dimension, and the end result is a complex story that is surprisingly enjoyable to piece together.

If uncovering a mystery and character interaction is what you crave, then Dead on the Money will more than satisfy. There are no traditional adventure game puzzles in L&O, as the entire game itself is a puzzle for you to figure out. The largest portion of this puzzle comprises the questioning of your witnesses and suspects. 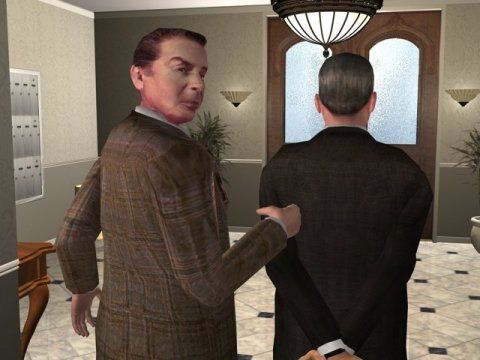 As inferred, the voice work is what you might expect from seasoned actors and actresses. Briscoe, with his dry-wit and deprecating candor; Serena’s no-nonsense, cut-to-the-chase velocity; Van Buren’s guiding, supportive, though non-participatory timbre. It is a good combination that will no doubt have you feeling like an interactive cast member (that is, if you are a follower of the series).

The game’s interface is very simple. You search for clues in designated areas. You select the question you wish to ask of the witness or suspect from a list, being wary to select the correct one. You then add their testimony (as well as evidence, research, test results, etc.) to your case file for later association with your suspect, and/or evidence to incriminate your final suspect. As you uncover clues in your questioning and research, new places will become available on your map. Through all of this, L&O is underscored by a light jazz soundtrack that puts one appropriately in a New York state of mind.

Let’s talk about this downtown…

L&O is broken up into two segments. Tutorials for both roles can be accessed from the main menu and provide an overview of what you need to accomplish. When the game begins, you have the choice of selecting two of four different skills to “bring to the table.” Dependent upon your choices, the game will give you more clues, more evidence, less non-essential questions to choose from your legal-pad, or better time management.

You will first play as sidekick to Detective Briscoe, with seven days to collect the evidence and uncover the clues that bind them to the murderer. First though, you will need to have a lot of evidence analyzed, items researched, and people watched, before you go getting all happy with an arrest warrant. You are scored on a percentage basis as to how well you did, a 100% resulting from asking the right questions in the best sequence.

The second half of the game, you’re partnered with Assistant District Attorney Serena Southerlyn, and presented with a similar set of skills to chose from. The focus is on cross-examination, which will culminate in a subpoena and the ultimate courtroom showdown. You only have two days time with each sub-scenario, so don’t stand there leafing through paperwork, get moving! When the game ends, you are again scored on a percentage basis. It is possible, and most probable, to end the game with a less than stellar score. This only adds a nominal replay value, because you will likely have replayed certain parts of the game a number of times already.

You can access the navigation bar at the bottom of the screen through your space bar. You can then select the map to quickly go to another area, add or view evidence in your case file - which is also used to convey these items through the various protocols, listen to any messages on your cell phone, and access the main menu.

The episodic feel of this game is undeniable, and the writing is top-notch. As mentioned above, the story is complex enough to keep you second-guessing, yet not so convoluted as to feel as though someone threw a bunch of adjectives in a bag and shook it. The story involves financial trade advisor Jennifer Russ and how she came to her demise along a bike path in the park. From there, you discover a domino set of characters that all stand to fall with the slightest touch, and you have just the finger.

The character modeling was, I’m sure, quite a challenge. It’s one thing to create a human-looking face from scratch, and quite another to mimic one. Taken as a whole, I think Legacy has done an admirable job in recreating the facial features of these well-known characters.

I rest my case…

There is a lot I liked about this game, mostly in the details. For example; when questioning a suspect or witness, they will alternately look over at your partner and then back at you, as if unsure who to address with their answer. Or when a witness is purportedly beat up by someone, the next time you see them, they will be wearing a bandage hiding the blue tint of a black-eye. Little things like this (and many others) make this game fun to see where the next scene will take you, and whether or not it’s incidental or vital to your success. There are loads of cut-scenes, mostly towards the end of your ‘case’ in court, yet the majority of the time you’ll spend in playing, and not watching.

I did not log the hours I spent playing the actual game, but it is not a quick diversion. You can expect to spend at least 10 or more hours solving the case your first time through. However, this is mostly for all the wrong reasons. The downside to L&O is the difficulty. I do not mean to imply that the game is too hard, but I do mean to imply that it is very unforgiving. For example, if you ask a suspect or witness an incorrect series of questions, you might as well go back to your last saved game and try again for the desired results. This can become frustrating, and will often result in playing an entire section of the game over again, with your only reward in the form of another name on the map, or another piece of evidence to add to the case file. Without which, of course, you cannot proceed.

Linearity is fine, and perhaps Legacy was trying to implement this as a means of strengthening or solidifying the game, I’m not sure. It did neither successfully, however, and I cannot help but feel as though I was slightly corralled into its conclusion, instead of a more open-ended line between point A and B one would normally desire in a game of this caliber. This could have been remedied by a difficulty setting or some other ‘boomerang’ device that would allow you a second attempt at a failed query, etc.

Oh, and if your computer happens to be using an S3 chipset (and you know who you are), you will most certainly want to download a particular patch that will make the evidence more visible (as opposed to completely invisible). Unless you are hailed in the eagle-eye vision and clairvoyance hall of fame, you can get said patch here.

Still though, Law & Order is a solid murder mystery on its own merits. Is it like the TV show? Most likely. Was it fun to play? Once I got it to play, certainly. Worth the money? Dead on.

After wading through the technical problems, a solid murder mystery that's fun to play and worth the money.

GAME INFO Law & Order: Dead on the Money is an adventure game by Legacy Interactive released in 2002 for . It has a style and is played in a perspective.

What our readers think of Law & Order: Dead on the Money