Sam & Max: Episode 3 - The Mole, the Mob, and the Meatball review

"I can't tell if it's comical or life-threatening."

It's been remarkably easy for supporters of the serialized adventure concept to trumpet the positive aspects of such an idea without consideration of the negatives. And the serialized adventure is a fantastic idea in theory, ideally eliminating the boredom that can set in the middle of longer games and rife with clever storytelling potential. Usually, though, the theory forgets about the fact that for an adventure to be truly serialized, new assets need to be generated very quickly and old assets updated and cleverly re-used, lest the dreaded label of "stale" be applied. We don't really know if this can be done, because to this point we've never seen a true serialized adventure. Sam & Max: The Mole, the Mob, and the Meatball brings us to the halfway point of the first ever "season" of an adventure series with a lot of healthy laughter and eye candy, but a bit of a reality check as well.

The season's story arc, as it were, of a dastardly mind-control plot continues in Episode 3 as our heroic Freelance Police dive into the lair of the Toy Mafia (creators of the hypnotic bear that played a role in the last episode). In order to get deep undercover and contact a mole who has gone dark, Sam & Max must infiltrate the Ted E. Bear Mafia-Free Playland and Casino. You may not be surprised to learn that there is more than a hint of mafia activity at the playland, and the entire mob angle is played up to great effect in a Fat Tony-esque way. The writing is sharp, with more bite to the jokes--in particular Max's dialogue (which is obviously the most essential to the game)--than previous episodes. 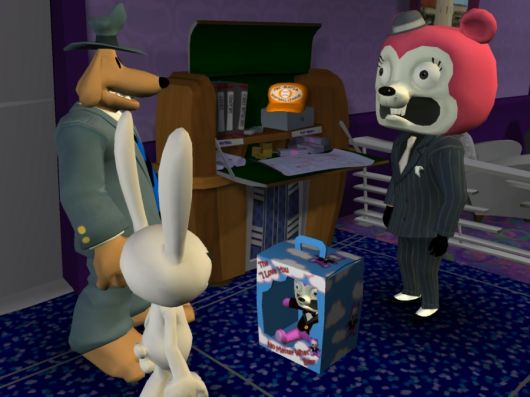 The puzzle difficulty, surely a bone of contention for the 95% of gamers who soared through the first two episodes unchallenged, has taken positive strides this time around. Don't expect any crazy inventory combinations or such, but there are a couple puzzles here that require some logical thought extension and may actually take a bit of time for some to complete. I am certain that many of those who play the game will blaze through it without a second thought but at least this episode contains genuine puzzles, in an effort to respond to what was probably the loudest complaint of the season to date.

"It's not going to be all laughs and dyspepsia, little chum."

Still, the sad truth is that even though there may be some extra puzzle-solving time involved, Episode 3 is an extremely short game, definitely the shortest of the three so far. That fact will be even more amplified if you're able to solve all of the puzzles without much extra thought, in which case you'll likely complete the game in under ninety minutes. For many gamers, despite the snack-sized price, there will undoubtedly be some frustration setting in at the lack of value. 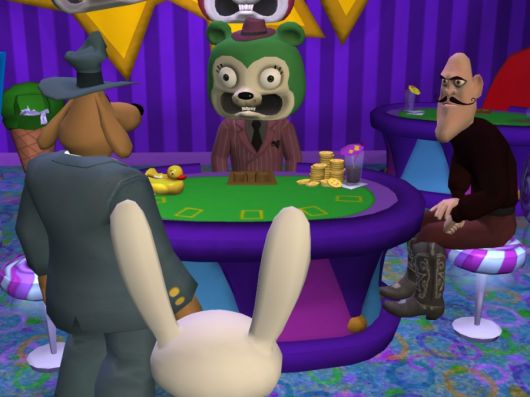 The annoyance at the game's brevity wouldn't be quite so strong if not for its glaring inability to creatively use existing assets. Bosco and Sybil, the two major recurring characters, have each gone through yet another identity change with new dialogue lines, and each are again responsible for the solution to a puzzle. Other than that, all the details from the now-familiar neighborhood are identical, and it is a bit disappointing how very few items carried over from previous episodes even have new look-at descriptions. There are only three new rooms in this game and very little time is spent in two of them, and the end result is that this episode winds up feeling decidedly small in scope. It is a troubling coincidence that the game with the quickest release turnaround contains the least new material, when the first two episodes with longer development cycles were able to offer more original interactions and characters—especially troubling because the next three episodes will each be only a month apart.

"Maybe 'charm' is a euphemism for gum disease!" 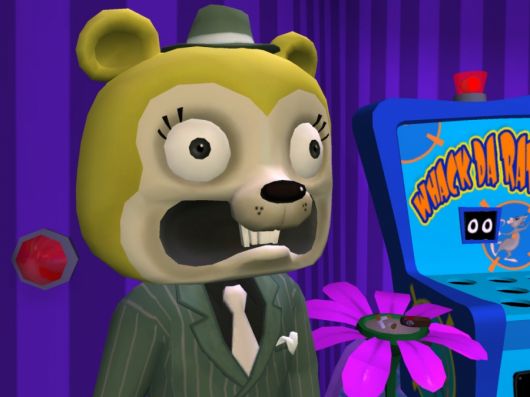 Any series which attempts to innovate at this level is an easy target for criticism—particularly when the central characters are so well-known and well-liked—and to be sure, there are many valid criticisms, but they should not overshadow the fact that Episode 3 does many, many things right. As mentioned earlier, the writing is sharper than ever. The art direction is as spectactular as you should have come to expect by now. The music is again brilliant, and the new music pieces are notably consistent with the scenes where they occur, particularly in the casino. And despite the game's uninspiring length, the entire "final boss" sequence and ending cartoon are the best ten minutes of the season to date, featuring razor-sharp writing and a host of visual gags, including some remarkable character animation that really shows off what the Telltale Tool is capable of. There's even another cliffhanger, which doesn't exactly hit 24 standards but still provides an acceptable modicum of intrigue heading into the next episode.

And there is no getting around the fact that this is an incredibly fun and charming game. The jokes are funny, the animation is vibrant, the characters are sufficiently wacky, and there is definitely no time for boredom. What little time is spent in this world is unquestionably quality time and with a franchise so beloved as Sam & Max, it is remarkable how faithful Telltale has been to the foundational concepts that make the characters so well-loved in the first place.

In the end, The Mole, the Mob, and the Meatball barely skirts the line of four stars, but I ended up falling back to 3.5 because even with the inherent, acceptable limitations of the serial adventure format there are still some issues present that I had hoped to see corrected by now--specifically, the fact that the length and scope of the games appear to be shrinking with each new episode. Season One is still visually striking, still extremely funny, and moving (slowly) in the right direction in the areas of puzzle difficulty and character voicing, and Episode 3 certainly contains the best ending of any episode so far. But at this point the season still falls squarely in the "very good" category and fans of the franchise can hope that, as rapidly as the episodes will now be arriving, some positive momentum can still be gained to push the series into the realm of truly great.

So far Season One is not particularly epic or memorable, but still a very good-looking and extremely fun diversion, and faithful to its franchise. But we're all hoping for a bit longer game next time.

What our readers think of Sam & Max: Episode 3 - The Mole, the Mob, and the Meatball