Under a Killing Moon, the third venture into the dark world of Tex Murphy, private eye, was a revolutionary game for the adventure industry. It spanned an at-the-time-unheard-of four CDs and featured all kinds of FMV, the likes of which had never been seen. And even when truckloads of FMV clones began coming down the chute in later years, UAKM still stood out as the only one with really good acting and believable characters. It is exactly what the Tex Murphy series has stood for: a fantastically-plotted mystery with great characters and classic Tex Murphy humor.

Unlike the previous two Tex games, Mean Streets and Martian Memorandum, Under a Killing Moon does not thrust you immediately into your case. Rather, the game begins as you, Tex Murphy, are just trying to find a job. You'll be wanderering your section of town, talking to the usual sources of information, meeting some of the locals, and just trying to get work. The big picture won't even begin to be seen until the very end of the first day. I love games that work like this, instead of just throwing you headfirst into the plot, they slowly paint the picture around you. This is what makes games like the Police Quest series and Lost Files of Sherlock Holmes so classic.

The advent of FMV brings a brand new personality to our hero, Tex Murphy. Before, he was a faceless robot who rarely spoke. Now, Tex has real personality. The loooong and involving introduction sequence finds us actually sympathizing with Tex. He's got problems. He has hardships. His wife cheated with an upholsterer (and we actually see this in a hilarious flashback). He can't get a job. He's broke. His fax machine doesn't work. He's a norm (short for "normal human") stuck in the mutant section of San Francisco with an old nuclear dumpyard around the corner. We actually feel bad for this man. He is an involving character to control, and the player may find themself emotionally attached to this lovable P.I., in the same way they did with Roger Wilco of Space Quest fame. 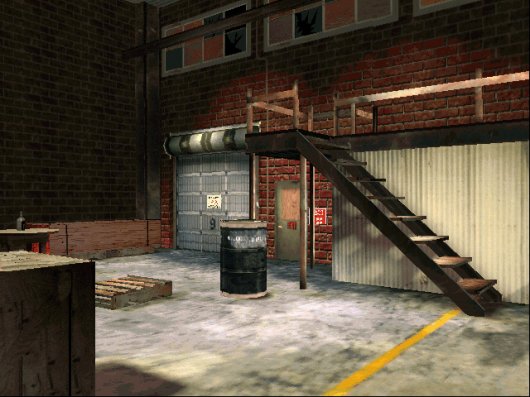 This time around, Tex also has a wicked wit. In conversations with other characters, you do not choose exactly what Tex will say; rather you choose what mood he will respond with (i.e. "veiled threat", "shameless flattery", "patronizing") and Tex will come up with his own dialogue. This completely original system works very, very well for the game. The dialogue is fresh and funny, even more impressive considering that the game is now eight years old.

Of course, what's a Tex Murphy game without an excellent storyline and subplots all along the way? You'll go from a small-time pawn shop burglary and end up trying to save the world from a cult with plans to end it. And you will most definitely be caught up in the adventure the whole time. The clever item descriptions and character dialogue will keep you playing into the wee hours of the night to peel off the next layer.

Though not as horribly easy as Martian Memorandum, Under a Killing Moon is still by no means a difficult game. The puzzles very rarely require serious thought to complete, and Access knows this; they also recognize that the fun of the game is not putting together inane combinations of items and doing stupid things with them to pick up one item. They don't want the gamer pulling their hair out. They recognize that the fun of this game is just playing through it, like reading a detective novel. 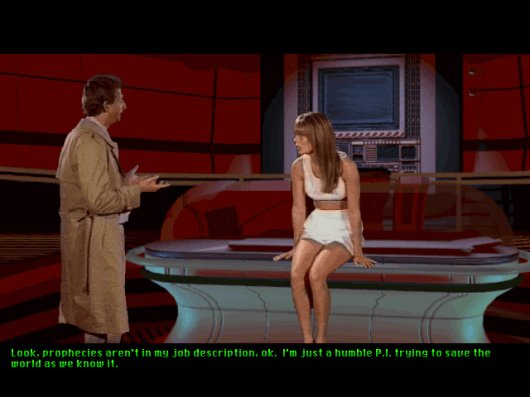 The interface of Under a Killing Moon is remarkably different. Most notably, it is in first-person view, and the gamer uses the spacebar to toggle between Movement Mode and Examine Mode. Movement mode will find you using the mouse to walk around and the arrow keys to look up and down. Admittedly, it's a little awkward, especially the slow walking. Examine mode allows you to look at objects and pick them up or manipulate them if necessary. The interface will take some getting used to, but the awkwardness will be forgotten about after playing for a while.

It's hard to believe that this is a 1994 game; the graphics have stood the test of time very well. The FMV graphics are exceptional, and the landscapes that you will be exploring look wonderful too. Access could afford to spend extra time on these since there really aren't that many locations you'll be visiting. The music is also excellent, a really nifty private eye groove. The characters are all acted to perfection, and usually with plenty of makeup to bring out their "mutantness". Get a load of Beek Nariz (guess how he got his name). Their voices are perfect for their character.

The best performance of all, though, is definitely turned in by Chris Jones as our hero, Tex Murphy. He is a likable hero in the midst of an enjoyable world that is fun to be a private eye in. Under a Killing Moon is an exceptional effort by Access Software, and if not for the sometimes clumsy interface, might just challenge Lost Files of Sherlock Holmes as the best detective game ever.

One of the best detective games available. Revolutionary at its time, and still stands up to the best of today. All adventure fans should own it.

GAME INFO Tex Murphy: Under a Killing Moon is an adventure game by Access released in 1994 for Mac, PC and Linux. It has a Live Action, Photographic style, presented in Full motion video, Realtime 3D and is played in a First-Person perspective. You can download Tex Murphy: Under a Killing Moon from: We get a small commission from any game you buy through these links.
The Good:
The Bad:
The Good:
The Bad:

What our readers think of Tex Murphy: Under a Killing Moon

Frustrating at times, but overall a great game

I really liked UaKM as a child, and was a bit apprehensive about replaying it. However, I'm glad to say it survived the test of time. The graphics are dated but functional. Most environments look... Read the review »

One of the most charming Adventure Games out there

Man, was I in for a surprise when I picked up the Tex Murphy games awhile back! I never paid attention to the FMV games in the mid 90's. I could not care less. But... Read the review »

The great Tex Murphy’s third adventure. After Mean Streets and Martian Memorandum, Tex jumped into the CD age with his first FMV adventure. Tex is a down on his luck PI in the Raymond Chandler... Read the review »