The Legend of Kyrandia: Hand of Fate review

We get a small commission from any books sold.
All Bitmap Books
Written by
Michael Amundson — October 14, 2005

Sequels tend to have a bad rap. Maybe it isn't fair. But let's face it, The Land Before Time MCXIV just didn't have the same spark and flavor of the first installment. And don't get me started about Hamlet II: Ophelia's Revenge. Thank goodness The Legend of Kyrandia: Hand of Fate doesn't fall into this trap. Instead of another cringe-inducing sequel, we find a game bursting with as much originality as, well… the original.

This quickly becomes obvious as we are thrown into a brand new plot. Much to the consternation of the Royal Mystics, Kyrandia is disappearing, and nobody seems to know why. It is decided that someone needs to do something, and a finger is pointed at Zanthia, youngest of the Mystics, who must travel to the island of Volcania, descend to the center of the world, and retrieve the fabled Anchor Stone. Only then will the Mystics be able to learn of a cure for Kyrandia's mysterious illness. Zanthia embarks upon her mission somewhat reluctantly, perhaps because it is daunting and dangerous, but more likely because the finger pointed at her belongs to a giant, disembodied hand.

Yes. One of the principle characters, and the reason for the game's title, is an enormous, intelligent hand. If The Legend of Kyrandia broke down barriers with its selection of a jester as villain, Hand of Fate positively destroys any remaining preconceptions of what character roles should be. If this hand doesn't ring any bells to players of the first game, don't worry. It's because Hand of Fate is almost entirely independent of its predecessor. Gone are our old friends Brandon and Kallak; they only receive a passing mention. The main link, aside from taking place in the general vicinity of Kyrandia, is the heroine: Zanthia. She played a minor role in the first title, but now it's finally her time to shine. 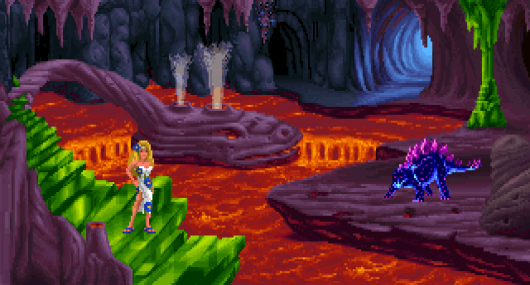 And she doesn't disappoint. Few adventure games from the early '90s feature a female protagonist. Even fewer feature a vivacious, rule-breaking, and funny character like Zanthia. The game world takes on a different appearance when explored through Zanthia's eyes. Almost nothing she encounters escapes a witty word, a poignant pun, or an astute assertion. The change of hands for storywriting to Rick Gush in this game was a definite success. We may miss the characters from the original, but we're introduced to a whole new cast that proves to be just as fascinating. From Faun, a half-goat that acts as Moneypenny to Zanthia's James Bond, to Marko the doting and clumsy "love interest," each of the new characters has a distinct personality--even the titular hand that serves as Marko's valet. Already a strength in the first game, the creative characters and characterizations in Hand of Fate manage to shoot farther ahead of its predecessor.

The plot, however, is more difficult to lavish with such praise. The game feels like it should have been longer, mainly because of several tantalizing references to the history of Kyrandia and other locations we never knew existed in the same universe. This isn't so much a complaint as it is a manifestation of curiosity. If a game is going to mention such grand concepts with far-reaching possibilities, we're going to want to know more. And Hand of Fate doesn't provide more. That said, it does get marks for at least offering some background information. The Legend of Kyrandia offered almost no insight into the history of Kyrandia. And the absence of expanded details gives us freedom to imagine what the story left out. Depending on personal taste, this can either be a good or bad thing.

Plot teases aside, the game manages to shine again in an entirely different area: the interface. What Hand of Fate uses is very similar to its predecessor. A traditional third-person point & click adventure, the game features the standard Mary Poppins-sized invisible bag, holding things as small as teddy bear eyes to items as large as a stool. But there's also an interface for magic, this time in the form of a spellbook and camping cauldron. Magic plays a much greater role in the sequel, quite logically, because the main character happens to be a Royal Mystic. And the game succeeds admirably at preventing the magic interface from being frustrating. If destroyed in mixing a potion, objects of essential importance to completing the game typically can be re-obtained with minimal effort. Westwood, thankfully, has continued with their approach of "missing or losing items shouldn't mean getting stuck," unlike certain other major adventure game developers of the same time period. (Wink wink, nudge nudge.) The interface is seldom boring, either. Keep an eye on the cauldron to see cameo appearances of the Giant Tentacle Jr. and Mr. Sailing Boat. Even items seem to take on a life of their own, with gnarlywood bark wriggling and potions resulting in all sorts of graphical splendor. 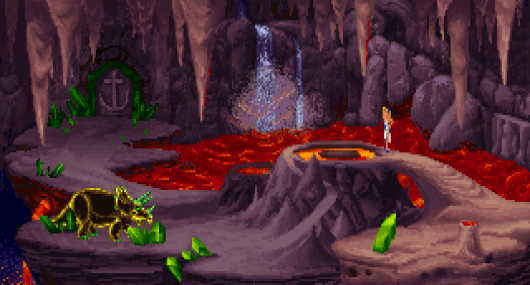 Speaking of graphical splendor, this is yet another aspect in which the game excels. The resolution may be trapped in time at a mere 320 x 240 pixels, but the beauty of the game is ageless. Sprites sparkle and objects are ornate, bringing Hand of Fate alive in a way that can't help but be admired. Zanthia's animations seem to have no limits as she runs, jumps, changes clothes, eats, walks, changes clothes, talks, recites poetry, rides a dinosaur, and changes clothes yet again.

The game's music and sound don't disappoint, either. The narrator presenting the introduction is pleasant to listen to, and clearly not some last minute contribution by a monotone programmer. The game's music, courtesy of Frank Klepacki, always provides suitable and pleasant atmosphere for the many locations. Events are accompanied by appropriate shifts in music and sound. And most major actions are accompanied by recognizable and sometimes even funny sound effects. Not an easy feat, given the technical limitations of sound cards in the MS-DOS era. 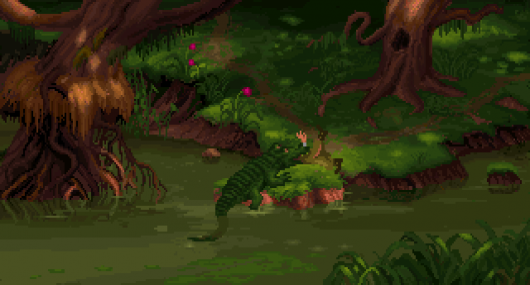 Puzzles in Hand of Fate are mainly inventory-based, and for the most part are a solid contribution to the game. They seldom require leaps in logic and, with a bit of ingenuity and thought, are quickly solved. They aren't exceptionally difficult, but give enough challenge to satisfy novice and veteran alike. Alas, it is here that we find the game's most significant problem. They are not all enjoyable... Indeed, if the game didn't have so much already going for it, some of the puzzles would be cause for premature aging and hair loss. Of particular note: a puzzle involving mixing potions to activate a rainbow bridge involves several dozen clicks while remaining standing in the exact same spot, and one of the final puzzles in the game featuring an inverted Towers of Hanoi, which can be minimally completed in another several dozen clicks. The Hanoi puzzle is perfectly acceptable as a logic puzzle, but its appearance gives more than a bit of grief. It's hard to tell any two "discs" apart in size, leading to obvious difficulties even if the logic of such a puzzle is obvious. A last picky point is that the showdown at the end of the game is the lone instance of trial-and-error that results in death. But it is short enough so as to not be a huge pain. Thankfully, these above-mentioned exceptions rarely detract from the better gameplay elements throughout.

All in all, The Legend of Kyrandia: Hand of Fate is a worthy successor to the original and proves itself an enjoyable adventure to any fan of Sierra or LucasArts-style point & click adventures. It doesn't succumb to the black hole of mediocrity or derivative cloning that so many sequels do, and manages to eclipse its predecessor in numerous ways. Fans of the first game will surely find much to enjoy here despite the differences, but because they're connected only loosely, experience with the first game is not a requirement. Hand of Fate is well worth buying even today, though it may require seeking out a used version on eBay or at a rummage sale. But it's a hunt that won't be regretted.

A game worthy of any adventure gamer's attention, even those uninitiated in Kyrandian lore.

What our readers think of The Legend of Kyrandia: Hand of Fate

4.5 stars out of 5
Average based on 10 ratings
Your rating