We get a small commission from any books sold.
All Bitmap Books
Written by
Christina Gmiterko — March 30, 2004

The original Syberia was an excellent game that came at a time when great adventures were scarce at best. It told a rich and enthralling story that left fans wanting more. In the two years since the original’s release, the adventure community has been through many disappointments, leaving Kate Walker again the task of breathing a little life back into the genre. There are a few slip-ups on the way, but thankfully Syberia II withstands those enough to succeed at its task.

When we last saw our intrepid heroine, Kate Walker, she was jumping onto a train, essentially leaving her former life as a corporate yuppie lawyer behind to accompany the eccentric dreamer Hans Voralberg on his quest to find the land of Syberia. Syberia II picks up exactly where the first game left off, and in reality, this game should be looked at as more of a direct continuation of the first game, rather than a sequel that stands on its own. While there is a video recap of Syberia to assist new players, I don’t think that people who haven’t played the first game will care very much about the objective at hand. Therefore, I strongly recommend that if you have not played through the original Syberia yet, you should do so before taking on the sequel.

As the game begins, your train makes a stop in Romansburg -- the last bastion of civilization before the endless tundra. After the opening cutscene, you gain control of Kate, and you will quickly realize that the interface is exactly as before: very simple and streamlined. Everything is completely point & click, with hotspots indicating when an item can be picked up or manipulated. By right-clicking you can access the inventory screen to either use or view items. It is so simple that anyone could start this game and ease right into the gameplay without having to consult a manual. There really are no interface differences between this and the first game to speak of, which I see as a good thing; the original interface worked just fine and by keeping it the same it makes the two halves feel like a single larger whole. 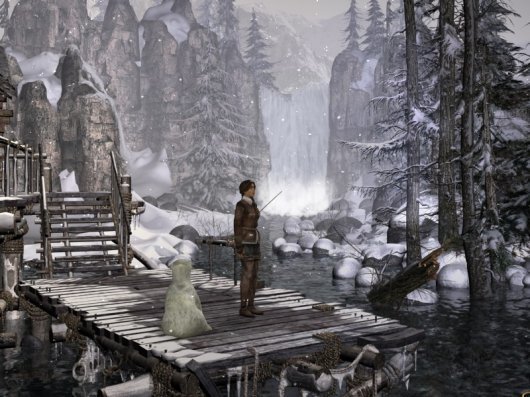 The main complaint with Syberia was the short playing time and lack of challenging puzzles. It is obvious that the game developers took this criticism to heart, because the largest area of improvement in the game over its predecessor is indeed the puzzle design. The most impressive aspect of the game, to me, was the real effort to put a variety of puzzles into the game -- not just inventory-based puzzles as was the case before, but puzzles that run the gamut from the relatively simple inventory-based puzzles to more difficult logic-based ones -- you may even want to anticipate getting stuck for a while!(Something I never would have dreamed to happen in Syberia.) The addition of more varied puzzles that range in difficulty has helped lengthen the playing time to almost double that of the original game, giving the player much more bang for their buck.

What the game gains in puzzle design though, it loses somewhat in character development. Kate’s motivations are very murky. In the first game, much of her personality and character arc is explained through her interactions with other in-game characters and her conversations on her cell phone. But as Kate wanders further and further away from civilization, meaningful character interactions become less and less common. In response to general criticism, the use of the cell phone has been marginalized in the sequel; although I am in the minority, I never minded the use of the cell phone as a storytelling device in Syberia. In a journey where your character is by herself most of the time, the presence of the cell phone is often the only thing to give the player insight into Kate’s emotions and thought processes. By all but removing that device, the game suffers from lack of character exposition. The player is left to extrapolate possible motivations for Kate based on assumptions, not by material that is present in the game.

Also less prevalent in this game are the symbolisms that in part, made the first installment so interesting. The themes of life and death, spirituality vs. machinery, abandonment, loss, and faith are all still present, but they aren’t as tantalizingly de-constructible as before. What are very tantalizing, however, are the graphics. Once again, the Microids art department has outdone themselves. Everything is even more gorgeous this time around than the original, if that's possible. All of the cutscenes, the backgrounds, and the characters look beautiful and are all improved on in some way over the first game. The characters have better expressions, the backgrounds are more detailed, and the cutscenes are even more cinematic. You can tell that they put painstaking detail into everything seen on screen. There are also nice little realistic touches to each frame: birds can be seen flying, wind rustling in the trees, rushing water, animals scurrying across the snow and other things that may be unnecessary to the actual gameplay, but add indubitably to the atmosphere. 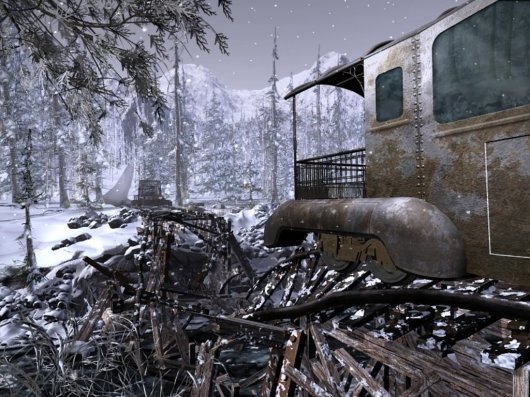 Equally as wonderful is the sound. Each locale of the game features a musical theme that is well-suited to the mood of that place. The score is very well done and my only complaint would be that I want to hear more of it; it really is beautiful. The voice acting is also much more solid all around than it was in the first game, and the dialogue remains strong throughout, with one small exception: it tends to get a bit heavy-handed and cheesy during the cutscenes -– very reminiscent of the dialogue in the trailer that was released for the game.

For many people, enjoying this game to the fullest will hinge on how much of a tradeoff they are willing to make between the story and the puzzles. Many of the original’s most vocal supporters loved it because of the storyline while many of its detractors criticized it for the lack of challenge. The developers took note of this and made a concerted effort to put in a greater variety of puzzles, but in doing so, the story -- in some respects -- falls by the wayside just a bit. However, the quality of the game as a whole is so outstanding that you will be willing to accept what is now a great story with improved puzzles, instead of what was a superb story with lackluster puzzles. Everyone should be able to find something -- most likely many things -- to admire about this game and I recommend it highly to everyone.

If you loved the first one or thought that it would be excellent if only the puzzles were more challenging, this is a game you will not want to be without.

GAME INFO Syberia II is an adventure game by Microïds released in 20042004 for Android, iPad, iPhone, Mac, PC, PlayStation 2, PlayStation 3, Xbox and Xbox 360. It has a Illustrated realism style, presented in 2D or 2.5D and is played in a Third-Person perspective. You can download Syberia II from: We get a small commission from any game you buy through these links.
The Good:
The Bad:
The Good:
The Bad:

What our readers think of Syberia II

A great continuation of where the story left off... I've enjoyed everything Benoît Sokal has done and this was no exception. I haven't been able to get my hands on Paradise. But this was a... Read the review »

A worthy sequel to the spellbinding original

This is less a sequel, but more a continuation of the story set up in the previous one. It resumes right after the fitting and touching cliffhanger from the original with a beautiful cutscene. After... Read the review »

Playing this game so close to the original just highlights for me the fact that this is a continuation of the last game rather than a sequel. It's as if funding ran out half way... Read the review »